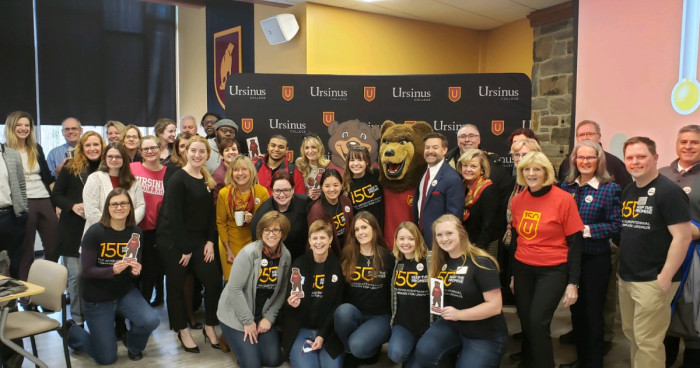 Ursinus Giving Closing in on a Major Milestone

As the Ursinus community celebrates its 150th anniversary with alumni gatherings, special events and historical celebrations, the advancement team of the college has been busy with one goal, to “keep the promise.”

Ursinus’s Keep the Promise campaign was publicly launched back in 2016 with the goal of raising $100 million for the college before the close of its sesquicentennial celebration in 2020. To date, the campaign has raised over $89 million and is on track to fulfill its goal by next July.[1] This campaign has helped bolster scholarships, capital improvements and has positioned the school for a leap forward that all alumni can be proud of. Colleen Fida ’15, assistant director of annual giving, and Rosemary Pall P’12, executive director of annual fund programs, shared what makes giving so important to Ursinus’s present and future.

One of the more impressive facts behind the campaign is that over 40%[2] of all Ursinus alumni have given at least once since its “soft launch” in 2012. If that many alumni gave every year, Ursinus would have one of the top giving rates in the entire country. One thing that Fida expressed is that for most GOLDs, it is not about the dollar amount. “One thing not everyone realizes is that small gifts do matter,” she said, “Participation is a factor in the national college rankings.” We hope that everyone can recognize that even if a donation is five dollars, we are so happy that you gave.” In the U.S. News & World Report rankings, alumni giving makes up as much as 5% of a college’s overall rating, in which Ursinus currently ranks as #82 among national liberal arts colleges. Both Fida and Pall mentioned how important it is for young alumni such as GOLDs to participate and be proud of their institution.

One of the most visible philanthropic opportunities for GOLDs lies with #Giving2UCday, which is set this year for December 3, 2019[3]. Since its inception, #Giving2UCday has rewritten the records for single day giving and shown impact across the campus. It serves as a perfect example of how small gifts can add up quickly, as last year the college raised over $240,000 from 1,707 donors. It is also a great opportunity to engage alumni and enlighten them on what giving can do.

“One common misconception is that people don’t understand how the support from donors is helping them on an everyday basis,” Fida said. This is because the annual fund serves as an important piece of the operating budget for the college. Pall stated, “The annual fund money we raise is spent in the year that it is raised as a line item in the budget and is counted on by the business office and trustees to support the college.”

Much of #Giving2UCday is also about keeping the connection to GOLDs and other alumni. The school hopes to maintain its relationships with GOLDs even after many of their friends have graduated from the school.

“We don’t want to wait until someone hasn’t been in touch with the school for years to connect,” Pall sad. “We want to maintain ties and ask our young alumni to give gifts that are meaningful to them, even if they are small.”

This year, #Giving2UCday has its largest and most historically significant goal yet, aiming for 1,869 donors to represent the year that Ursinus opened its doors.

Innovation, student success, and igniting that power of our people

The Keep the Promise campaign has three major priorities, all of which the college has made progress toward over the past seven years. The first is to advance academic innovation, which the college has done in tangible ways through the construction of the Innovation and Discovery Center and with the organization of the college’s three academic centers[4]. The second is to invest in student success, which this campaign has helped do through a greater number of endowed scholarships and investing in Ursinus traditions such as Summer Fellows. This past year, 41.8% of money from the annual fund went to scholarships and financial aid[5]. The third is to ignite the power of its people, which can be seen throughout the Ursinus campus. One of the more notable goals to bring people together is evident in the development of the Commons, which will bring together faculty, staff, prospective students, and the community all in one place. The Commons is set to open within this academic year.

The future of philanthropy

As one chapter begins to close, another will look to open for Ursinus’s philanthropic growth. Once the school raises the final $11 million and hits its Keep the Promise target, the process begins anew for the next campaign. While there is no set plan for the next campaign, Ursinus has a lot of voices to consider.

“There are many people involved in discussions about the timing and focus of any potential campaign,” Pall stated. “The annual fund and endowment will always be part of any future fundraising efforts. We will be looking at the recent campus master plan that was done regarding the physical environment of campus and invite feedback from students, faculty, alumni and staff. Those at Ursinus really do have a great opportunity to have their voices be heard.”

As with all things Ursinus, it is the closeness and connection that will help drive us to keep the current promise and continue on to the next challenge.

For GOLDs, the sentiment echoed throughout the college is to stay connected. For those who can, give back so that Ursinus can provide the scholarships and support that today’s students need. Every little bit makes a difference. For those who may not be able to donate, instead try to share when Ursinus makes positive news and come back to visit campus. These efforts, when put together, add up to a brighter future for a school that has helped shape all our lives.

[1] You can track its progress at www.ursinus.edu/keepthepromise

[4] Parlee Center for Science and the Common Good, U-Imagine Center for Integrative and Entrepreneurial Studies, and the Melrose Center for Global Civic Engagement