RONALD HESS, a professor emeritus of chemistry who served the college with distinction for a remarkable 50 years, passed away on Monday, July 1, from complications of Alzheimer’s disease
and following surgery for a broken hip.

“Ron touched the lives of thousands of Ursinus students throughout his remarkable 50-year career,” said Mark Ellison, the David Laucks Hain Professor of Chemistry at Ursinus. “In addition to being a passionate teacher of the very difficult subject of organic chemistry, Ron was a down-to-earth person who could easily connect with students.” 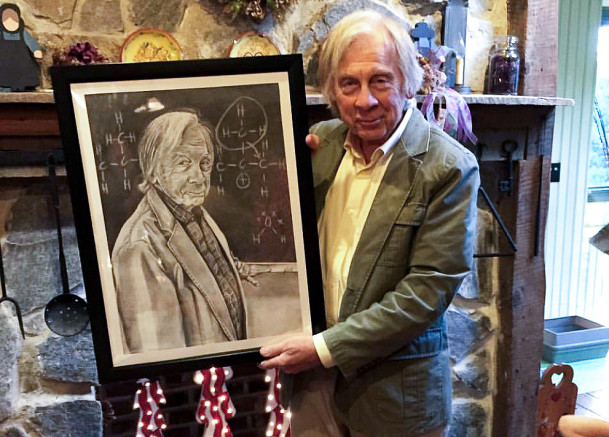 “He loved when students visited his office, and he would talk with them at length about organic chemistry, baseball, his beloved dogs, trains (a hobby and passion of his), and anything that was on the student’s mind,” Ellison said. “Ron taught a difficult subject, and he had high standards for his students, but he always encouraged them and believed in them. He provided gentle encouragement and gave students hope when they were doubting themselves. For many students, Ron was not just a teacher, he was a life coach.”

Hess arrived at Ursinus in 1966 after earning his bachelor’s degree in chemistry from Lock Haven State College. During his time at Ursinus, he served as advisor to the Brownback- Anders Pre-Health Society, Cub & Key Society, and was pre-legal advisor. Along with serving as chemistry department chair, Hess taught many courses in organic chemistry and general chemistry while advising numerous students in honors research and directed research.

In 1967, Hess received his doctoral degree from Cornell University. He was honored with the title of David Laucks Hain Professor of Chemistry at Ursinus in 2003. In 2005, Hess was awarded the Freshman Advising Award and in 2008, he received the American Chemical Society Award for Excellence in Undergraduate Teaching in the Chemical Sciences (Philadelphia section). He retired and became professor emeritus in 2016. That April, he delivered his “last lecture” in Olin Auditorium in front of students, alumni and faculty colleagues, and received a standing ovation for a 50-year career.