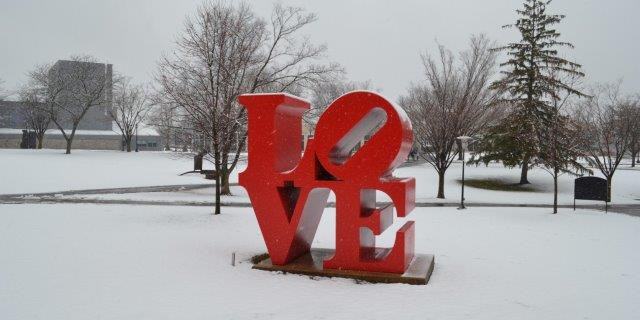 The History of the LOVE Statue

Ursinus College’s variety of outdoor art sculptures are well known for their unique and intriguing characteristics. Each sculpture boasts its own fascinating history and, perhaps, its own colorful, student-produced storyline. While every art piece in Ursinus’s ever-growing outdoor sculpture collection is noteworthy, one of the most celebrated and “loved” outdoor sculptures to date is none other than the iconic LOVE sculpture nestled just outside of lower Wismer.

The original LOVE sculpture print and design was created by Robert Indiana, an American artist known for his association with what is now considered the “Pop Art” movement—an artistic trend that emerged in the United States and United Kingdom during the late 1950s. Indiana’s work, as exhibited by his renowned LOVE sculpture, consisted of bold, simple images in the form of numbers and short words, such as LOVE, EAT and HUG. While Indiana is best known for his sculptures, he more so considered himself a painter and a poet. In fact, Indiana began sculpting simply because, one day, he found raw materials lying outside his studio door in lower Manhattan. Though Indiana is most famous for his LOVE sculpture, the design of the word LOVE, with its stacked letters and tilted O, did not originate in sculpture format.

The famed LOVE image we know today first appeared in a series of poems originally written by Indiana in 1958. In 1964, Indiana sketched the now-famous image and later attempted to copyright it; however, he found himself unable to do so as courts at the time refused to grant copyrights for single words. Due to this copyright issue, other entities were able to procure and utilize Indiana’s LOVE design for business purposes without Indiana’s consent. In 1965, the Museum of Modern Art published the image in its annual Christmas card, which fueled a greater interest in and admiration of Indiana’s LOVE image.

Given the increased popularity of the design, Indiana fashioned the first LOVE sculpture and, in 1970, this original sculpture made its debut in the Indianapolis Museum of Art. By 1973, the image was so popular that the U.S. Postal Service incorporated the design into one of its stamps, which sold about 330 million copies. Since the 1970s, this word in sculpture format can be found in different locations all over the world, including but not limited to Philadelphia, Montreal, Jerusalem, and our very own Ursinus College. The version of the sculpture at Ursinus College made its way to campus in the mid-1970s and was authorized by Robert Indiana, himself. Over 40 years later, this sculpture continues to not only serve as one of focal points on campus, but adds to the charm of Ursinus College.