Philanthropists Joan and Will Abele ’61, through their Abele Family Foundation, have generously provided Ursinus with the largest single private gift in its 150-year history: $11 million to support the Abele Scholars Program for years to come.

The pledge was announced on Friday, January 17, in front of the Ursinus community and special guests, officially carrying Ursinus over its $100 million Keep the Promise campaign goal.

The Abele Scholars Program helps to fill the financial gaps confronting many students from low- and middle-income families. Established in 2018, it supports students every year from Pennsylvania, New Jersey, Delaware and Maryland. Abele Scholars receive $40,000 over four years. In addition, each scholar receives $2,000 for “startup” costs, such as the purchase of a laptop or required books; $3,000 for academically enriching pursuits, such as internships, summer courses or academic conferences; and $8,000 in loan forgiveness. 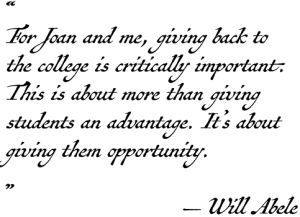 “For Joan and me, giving back to the college is critically important. This is about more than giving students an advantage. It’s about giving them opportunity,” Will Abele said.

As an alumnus and member of the Ursinus College Board of Trustees, Will and his wife, Joan, have supported Ursinus philanthropically for 50 years.

“The Abele Scholars Program has provided standout students with the resources required to reach their fullest potential and become responsible, contributing citizens, all while strengthening Ursinus’s commitment to access and affordability,” Ursinus President Brock Blomberg said.

The Abele Scholars Program is currently in its second year of operation and includes two cohorts totaling 24 students. Approximately 18 first-year students are targeted annually for each new cohort, with finalists selected by a committee of Ursinus faculty, staff, alumni and Abele Family Foundation representatives.

A part of the gift, Ursinus’s new Commons will be named in honor of former assistant professor of religion, wrestling coach and executive secretary for the alumni association Richard T. Schellhase ’45, who was a personal mentor to Will Abele, and his wife, Kay Schellhase ’57. 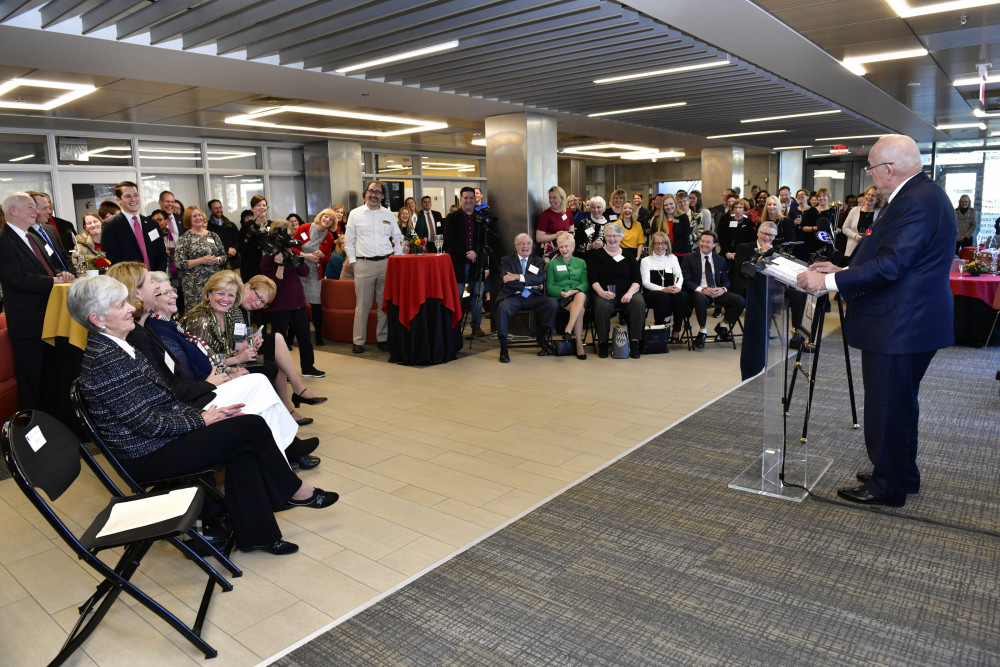 Thus far during the Keep The Promise campaign, 65 named scholarships have been created. Let’s keep the momentum going. Ursinus is challenging the community to create another 35 scholarships for our students. There are several ways to support scholarships at Ursinus. For more information, contact the office of advancement at ucalumni@ursinus.edu or (610) 409-3585.