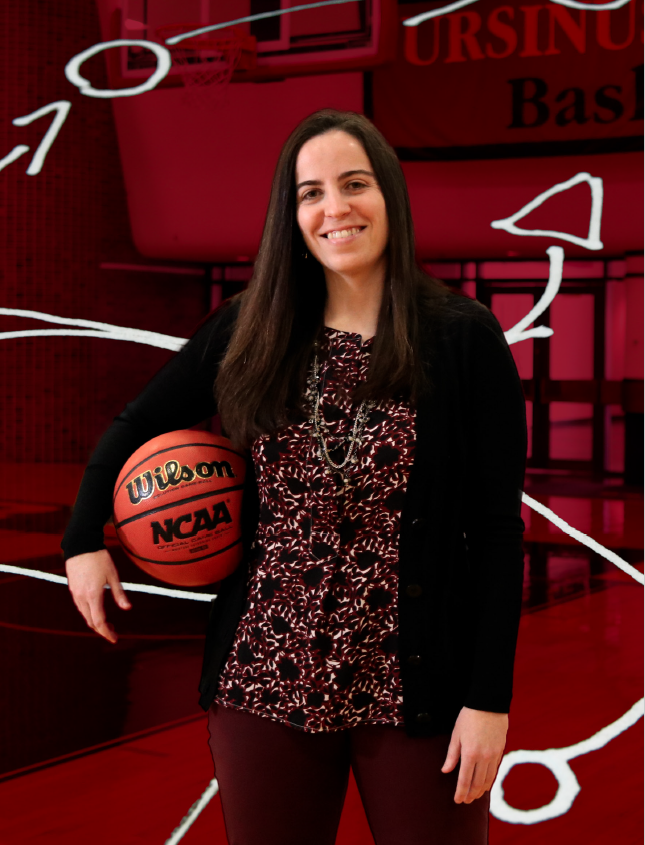 Getting to Know Margaret White

Ursinus’s head women’s basketball coach came to Collegeville in 2015-16. On the Helfferich hardwood, she has coached All-Centennial Conference performers and guided the Bears to back-to-back conference playoff appearances in 2017-18 and 2018-19. A 2009 graduate of Gettysburg College, White is sixth all-time in Bullets history in three-pointers made, with 118.

If you were to play in a 3-on-3 tournament for the ages with basketball legends from the collegiate and professional ranks, who would be on your team?

I would go with the two Birds: Sue Bird and Larry Bird. Both are/ were such smart players and can shoot the lights out. I would just give the ball to them and stay out of the way!

Do you have a coaching idol? Why do you look up to that person, and do you model your style or philosophy after him or her?

I’ve been fortunate to work with some tremendous coaches during my career so far, especially when I was an assistant coach at three different schools before coming to Ursinus. One of the best pieces of advice I received was to be authentic, so I try hard not to emulate a certain coach. Of course, I’ve picked up great philosophies, X’s and O’s tips, and leadership traits that I have learned from and adapted to fit my own style.

What has been the most rewarding part of coaching Ursinus women’s basketball?

Our team is just a ton of fun to be around. They have a great sense of humor and it keeps us going through the ups and downs of a basketball season. It’s really rewarding to see them improve throughout a season or career and to watch them achieve their goals both on and off the court. Our team is also tremendously resilient. When they face a challenge, they choose to let it make them stronger, and that has continued to propel us toward being one of the top teams in the Centennial Conference. I also get to work with two very talented assistant coaches and UC alums (Kim Smith ’86 and Angela Upright ’17), who go above and beyond for our program every day.

Do you have a standout moment from your time as a coach here?

There are a few, but nothing quite compares to when we had the opportunity to play a conference game at the Palestra at UPenn a couple seasons ago. We had the first game of the day (out of five back-to-back conference games), so we got the whole Palestra to ourselves when we arrived, which was awesome. We had one of our best performances against Gettysburg (who ended up winning the conference that year) and we took them into overtime in front of a huge crowd of fans, family and alumni. Despite losing the game in the end, our team got to experience playing on the “big stage” and showcased what our program is all about.

Ursinus has a long and storied history in women’s athletics. What does that mean to you? How do you view your place within that history?

I think the fact that Ursinus has such a rich history in women’s athletics is really important. I am a woman coaching a women’s sport within an athletic department that is led by a woman [Director of Athletics Laura Moliken]. In the landscape of college athletics, that makes Ursinus unique. I grew up being coached by tremendous male coaches, and I appreciate all that they taught me about basketball and life. It is so important, however, that girls and young women see women in leadership roles in athletics, a field that continues to be male-dominated, long after Title IX. I also have two talented assistant coaches who represent two different generations of Ursinus female athletes. Ursinus can be very proud that their experience here was so positive that they feel compelled to pay it forward to this generation.

What’s the best piece of advice you ever received as a player, and do you share that same advice with your own players?

The best advice I ever got was from my college coach, who told me to “work harder and pray more” when I was struggling with my performance. It was very straightforward advice (and maybe a bit sarcastic), but accurate. I think sometimes we (coaches and players) can overthink things and be very hard on ourselves, when in fact the game is actually pretty simple. I do emphasize the importance of preparation, hard work and going the extra mile with my team … but I leave the religious piece up to them!

Back to fun hypotheticals. The game is on the line and one bucket wins it. Who’s taking the shot?

Like many sports fans, I can’t decide between Lebron James or Michael Jordan!