"Office Space: The Keeper of the Flame"
URSINUS Magazine

Katie Morello ’08 is an Emmy Award winning producer and editor for NFL Films, where she works on programs like Inside the NFL, NFL Films Presents and Hard Knocks.

The sign hangs above an entryway down a long hallway at NFL Films headquarters in Mt Laurel, N.J.: “Keepers of the Flame.” It’s a label that the production company’s many filmmakers and cinematographers take seriously, since it has played an enormous role in the National Football League’s immense popularity.

“We understand the legacy we have here,” says Katie Morello ’08, an NFL Films associate producer. “‘Keepers of the Flame’ is our motto. We must carry on that legacy and make sure our content is the best it can be. These are some of the greatest filmmakers in the world who have captured some of the greatest plays and players in history.”

Morello majored in media and communication studies and psychology at Ursinus and earned a master’s degree in film at The New School. At NFL Films, she landed an internship and then became a seasonal production assistant before being hired full time in 2015. In her current role, she pitches her own stories, writes them, picks her own music and edits it all together to create the compelling narrative so many fans have come to expect with NFL Films.

Morello is proud to be one of eight female producers in the company. “I don’t take it lightly and there’s a certain responsibility that comes with that,” she says. She’s earned two Emmy awards: one as an associate producer on the HBO Hard Knocks season that covered the Houston Texans, and the other for editing Hard Knocks featuring the Cincinnati Bengals.

She’s rubbed elbows with legendary players past and present, like Joe Namath and Larry Fitzgerald, and has worked on programs like Inside the NFL, NFL Films Presents and the NFL Network’s NFL 100 program, which highlighted the league over its first century. But her favorite story was an original idea she pitched about the NFL’s first female scout, Connie Carberg of the New York Jets.

“I’m always looking for stories that allow me to be true to myself, while also being true to the Sabols [NFL Films pioneers Ed and Steve Sabol] and their legacy,” Morello says.

As a long-time Philadelphia Eagles fan, though, editing the team’s Super Bowl highlight film might top the list. “That was probably my proudest moment,” Morello says. “Handing a copy of that DVD to my dad.” 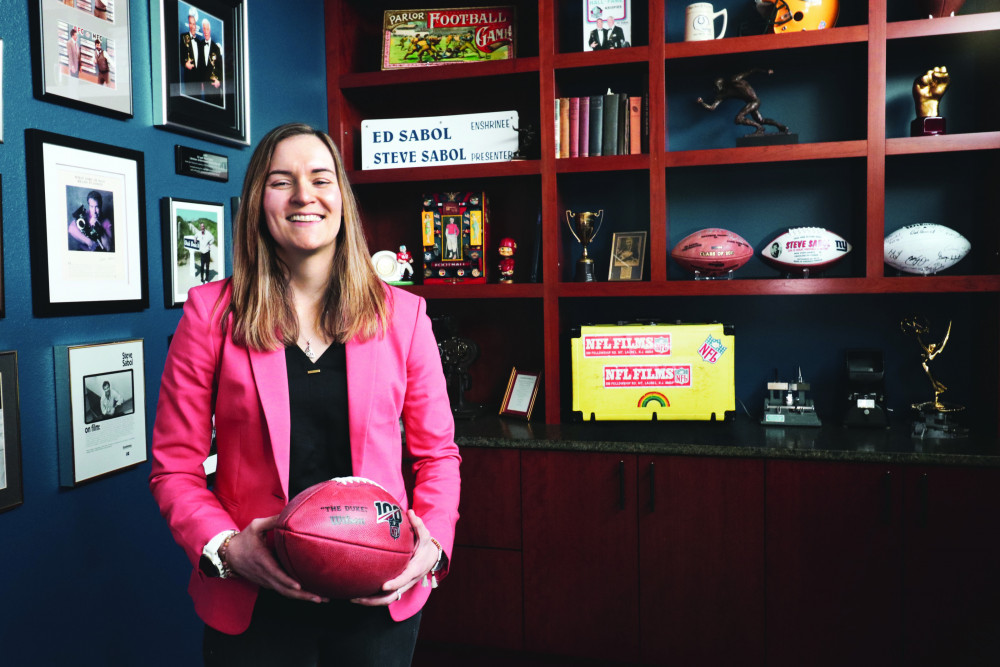