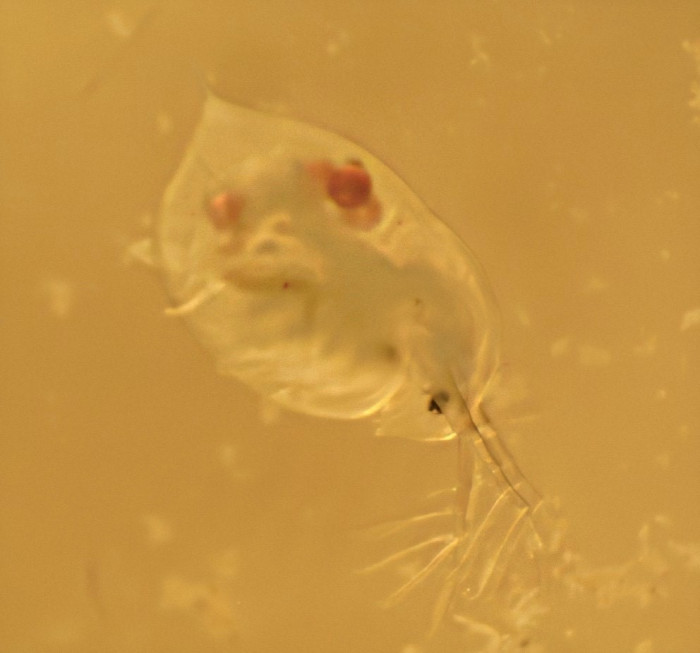 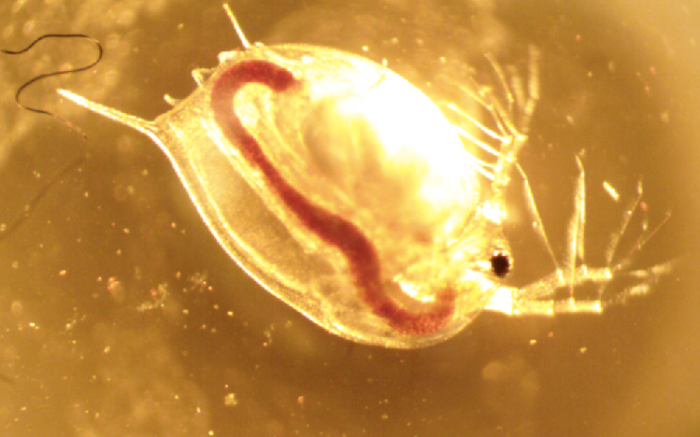 Recycling your single-use water bottle and opting to use a reusable canvas grocery bag are good ways to start cutting down on pollution, but the billions of microplastic shards and particles that have made their way to bodies of water across the globe can originate in some surprising places.

Microplastics can come from larger pieces of plastics that have been worn down to a small size, but they also exist in hundreds of everyday products like toothpaste and facial cleanser. The little beads or shards of plastic enter the water system through sink drains and find their way to waterways around the world.

The plastic can take over 400 years to break down and decompose, creating long-lasting problems in the ecosystem and food chain.

In Kate Goddard’s freshwater biology class, two pairs of students are researching the direct impact that these tiny plastic particles have on freshwater Daphnia and the greater food system.

Daphnia are small planktonic crustaceans often called water fleas. These tiny, clear water bugs can live in a variety of aquatic environments, including freshwater systems like the ones studied by Goddard, an associate professor of biology, and her students.

The Daphnia are considered an important part of the food chain. Other, larger plankton feed on them, which are eaten by larger fish who, in turn, are consumed by even larger fish. Eventually, the microplastics in the daphnia can work their way up the food chain and end up on your plate next time you order sushi.

“We used 20 micrometer spherical polystyrene plastics that were dyed red so we could see them under the microscope,” Victoria Bearden ’22 shared of her research with lab partner Abigail Schwerdt ’21.

When the Daphnia ingest the microplastics, the two lab groups are able to see the red plastic through their clear bodies and into their digestive tracts under the microscope.

In their experiments, Smith and Baltz witnessed the Daphnia consuming the plastics but eventually starving.

“We think it’s because they had false satiation from food,” Smith explained. The plastics were making the Daphnia feel full, but they were becoming malnourished from a lack of proper diet. This is something that Goddard says is known to happen with sea turtles as well. Unfortunately, because the Daphnia did not evolve with the plastics as a part of their natural environment there was no reason that they would have evolved to avoid it.

“Microplastics are becoming increasingly a problem in freshwater systems,” Baltz explained, “The primary literature that we observed saw that in the presence of microplastics, Daphnia population growth declined.”

Another one of Goddard’s students, Ian Johnson ’21, took part in the Research Experiences for Undergraduates (REU) program funded by the National Science Foundation, taking a look at microplastics in the Delaware Bay. He recently presented his research at the Ocean Sciences meeting in California.

According to Goddard, sanitary sewage treatment facilities can’t clear the water of microplastics. The plants, which treat the water coming from showers, dishwashers, sinks, toilets and more, clear out the waste and bacteria but are unable to filter all of the microplastics. The water then ends up in rivers which eventually leads to estuaries or bays. Johnson is studying the cumulative effects of these microplastics in the Delaware Bay.

“Every river nearby that has a sewage treatment plant on it is dumping into the Delaware Bay,” Goddard explained, “They are all carrying some burden of plastic and so it’s really accumulating and the concentration is increasing because all of these waters converge on the bay.”—By Mary Lobo ’15