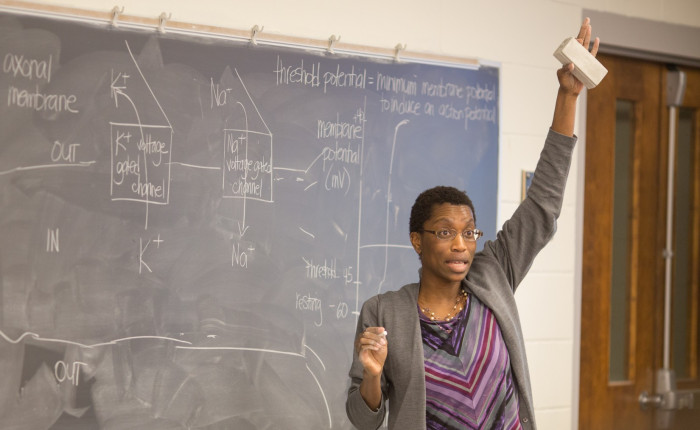 ‘Role Model’ Practices What She Teaches

What is a mentor? To assistant professor Carlita Favero, mentorship has a special meaning, and she puts it into practice. She was honored with a mentoring award.
October 28, 2014

To Carlita Favero, a faculty mentor is someone who sees potential and pushes a student to reach it. “The mentor encourages and inspires,” says Favero, an assistant professor of Biology and Neuroscience at Ursinus College.  “You don’t take anyone at face value. There is always more there. The message is, ‘I’m going to push you hard but I believe in you. I think you can handle it.’”

Favero puts her philosophy of mentoring into practice.  She recently was recognized as a National Role Model by Minority Access Inc. of Hyattsville, Md.

The Role Model recognition has several academic categories, but Favero was designated a faculty mentor role model in “all disciplines.” She was one of five faculty mentors nationally to have been so honored, to continue the chain of inspiring others “to emulate them and thereby, increase the pool of underrepresented scholars and professionals” according to the organization.

In addition to her regular teaching, she became active in Ursinus’s W.R. Crigler Institute, a summer program for first-generation and Pell grant-eligible students and members of historically underrepresented groups. She wanted the mentoring to continue into the academic year.  She and colleague Professor Rebecca Kohn last spring started the Co-Curricular Program, to continue to help these students achieve success.  At this time the primary focus is on students in Biology and Neuroscience introductory lab science courses, but she hopes that the program will grow to include students who are involved in coursework in all of the science disciplines and math. They target students who belong to groups that have been traditionally underserved in the sciences, Pell eligible, first generation, underrepresented minority students, and women.

“The first six weeks is crucial to success in college,” she says.” It is important to have a peer mentor and a support network.” Each session focuses on a timely topic: skills in time management, study strategies, effective note-taking, and scientific writing. After navigating classroom skills, she plans to broaden the focus with research, networking and career help.

“I have big dreams,” she says. “I envision more student mentors and I would like to incorporate more first year students in lab research, which is paramount to their success. In the lab, you solidify the concepts you learn in the classroom.”

Favero mentors students beyond the classroom by including them in her scientific research program and by supporting them as they consider future careers in science, points out Kohn, professor of Biology and assistant dean, who nominated Favero for the Role Model honor.

Favero completed her undergraduate work at the College of William and Mary, with a BS in Biology and Elementary Education. While a student she was an undergraduate teaching assistant in the Chemistry Department and a GTE Science Explorers teaching assistant in the Biology Department. She earned her Ph.D. at the University of Virginia, where she also pursued postdoctoral work. She joined the Ursinus faculty in 2010. She is close to publishing her work on fetal alcohol spectrum disorders examining the effect of prenatal alcohol exposure on brain development in a mammalian mouse model. Several of her students have presented their work at regional and national scientific conferences. She participates in the HHMI-supported FUTURE summer research program which immerses new students in the research laboratory, and she serves as the faculty advisor for the Minority Association of Pre-Medical students at Ursinus College, which recently won the chapter award at its national conference.

She owes her success to several mentors. Chon Glover, one of her early mentors currently serving as the chief diversity officer at William and Mary, was at the Minority Access conference. “As an undergrad, she introduced me to a calendar,” Favero says. “You can get it all done but you have to prioritize. She changed the game for me.”

And she has begun to see the fruits of her mentoring. Rod Coplin 2013, who is now teaching and pursuing a graduate degree, presented his research from her lab at the 2012 Minority Access Conference.  Some of her students are applying to medical schools, and others are in pharmacy school, graduate school for neuroscience, and teaching Biology.

No doubt there will be many more.