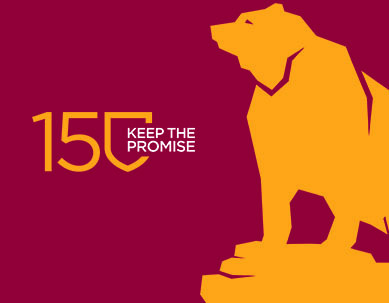 Nearly four years after the public launch of the Keep the Promise comprehensive campaign, Ursinus College announced its succ essful conclusion, raising $107 million for a variety of priority areas across the college.
September 28, 2020

More than 14,300 donors stepped up to support Ursinus and its students, with nearly 7,700 of them making a gift for the very first time. In celebration, the college unveiled a special commemorative website that demonstrates how private philanthropy has translated to tangible impact.

“It brings me great excitement to see the culmination of Keep the Promise,” says President Brock Blomberg, “particularly as I have watched Ursinus’s campus community directly benefit from the generosity of our donors. As we simultaneously marked our sesquicentennial, advanced a new strategic plan and embarked upon an extensive master planning process for the college, this campaign fed an atmosphere of excitement as well as fueled tangible results for the betterment of our Bears.”

Keep the Promise coincided with the college’s milestone 150th anniversary. It was the most ambitious fundraising campaign in the college’s history, with an original $100 million target focused on three overarching priorities: Advance Academic Innovation, Invest in Student Success and Ignite the Power of Our People. Across these key areas donations have led to infrastructure improvements, increased scholarship support, new and expanded academic programs, resources for faculty and the growth of both Ursinus’s endowment and annual operations budget.

As a result of the campaign, the Innovation and Discovery Center opened its doors in fall 2018 and the Schellhase Commons followed this fall. Further, the college’s commitment to supporting its students from the moment they set foot on campus was further solidified with the creation of 65 new named scholarship funds as well as the expansion of experiential learning opportunities such as the Philadelphia Experience, internships and externships and the study abroad program. The short-term health of the college was boosted by the more than $18.2 million raised for the annual fund, and its long-term strength was fortified by $28 million raised for the endowment.

Senior Vice President for Advancement Jill Leauber Marsteller ’78, P18 says, “This truly was a proud achievement for Ursinus, and it has been inspiring to see so many alumni, parents, faculty, staff, students and friends come together to not only celebrate this college, but also to invest in its future.”

The campaign also marked a high-point for Ursinus when it received the single largest gift commitment in its history, $11 million from Will Abele ’61, Joan Abele and the Abele Family Foundation, Inc. to grow the Abele Scholars Program. The program, originally established in 2018, fosters the long-term development of its participants by offering tuition assistance, start-up funding, enrichment funding, mentoring and advising and loan forgiveness grants. Approximately 18 scholars are selected for each incoming cohort and the support they receive is valued at $65,000 per student over their four years at the college.

“This campaign is just another example of how Ursinus is putting our students first,” says Blomberg. “From our academic centers, to our student-centered programs, to our robust financial aid, we are focused on fostering excellence from our Bears in the years ahead. And this is made possible, in large part, because of the dedication and commitment we have received from our donors.”