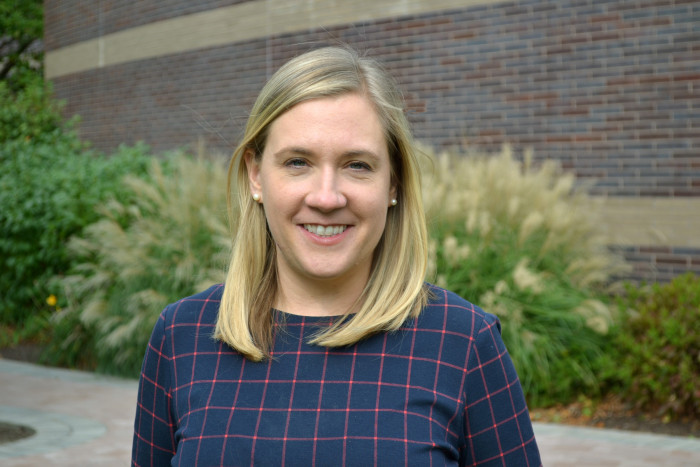 Ann Karreth is an assistant professor of politics at Ursinus. She teaches an array of courses in comparative politics, including in African politics as well as political behavior and the political economy in developing countries. Ann joined us late last month for a Q&A. She also presented a “Lightning Lecture” for our UC community about the 100th anniversary of the 19th Amendment available here.
October 25, 2020

Can you talk very generally about your research interests?
I research political behavior and political participation in African countries. I specifically look at the community level and why people choose to participate in community governance, particularly in community policing, which is relevant to the U.S. today. There’s a lot of distrust in the racially segregated country of South Africa toward the police, who were violent and repressive during Apartheid. Today, building a democratic country requires more trust between the communities and the police, so my focus is what makes people participate in governing security.

What inspired your particular interest in African politics? How have you shared this research with students?

I had a mentor in my first year of graduate school who helped me land a junior research fellowship at the University of Cape Town. When I got to South Africa, I really noticed two things. First, there were so many people involved in their communities—not only going to the voting booths but joining community associations and trying to fight for things like better water supply or electricity for their very poor townships. There were so many people active in civic life at the local level. The other thing was that race and ethnicity are very salient there. I look at those two subjects in my own research and it all stems from that opportunity.

It’s hard teaching African politics at the undergraduate level, but it’s rewarding. I always give a map quiz on the first day and students have trouble locating countries. By the end of the semester, they’re experts. One way that I engage students specifically with South African politics is through a “Reacting to the Past” simulation where they play the part of various political actors during the fall of Apartheid. That’s always really fun.

What prompted you to collaborate with your father on The 25 Issues that Shape American Politics: Debates, Differences, and Divisions?

My dad (Michael Kryzanek, a professor emeritus of political science, Bridgewater State University), like me, studies politics elsewhere. He was a Latin Americanist and I’m an Africanist. But we wanted to create a textbook that can almost be a supplement to your regular American government textbook in which students learn about the issues that affect them the most and give them some background on those issues.

How has the American political landscape changed in the three years since that book was published? Do you believe that the rate of change for politics is faster than a decade ago?
I think things have changed and things have stayed the same in some respects. President Trump has sort of shaken things up. He doesn’t necessarily follow norms in American politics. So, that has changed the political scene. And a lot of people talk about the great degree of polarization that now exists in this country. If we take a longer historical look, this polarization has been evolving since Watergate, which is seen as this watershed moment where trust in government started to fray. Polarization really followed from that and we’re seeing a very volatile, partisan environment that’s the culmination of a long trend of political polarization in this country.

How do you believe the pandemic has affected politics, both in the U.S. and globally? What do you predict for 2021?
I’ll take the second question first. My prediction for 2021 is that I have no prediction. I think we’ve all learned that we can’t really even plan two weeks ahead. A lot of people are really beginning to see that we need to make changes to the social safety net we’ve come to rely on, especially with respect to the provision of healthcare. For many people, the pandemic has forced them to think about how comfortable they are with government dictating certain rules in society. Some state governments are mandating masks and shutting down businesses. It really has made people think about the degree they want government involvement in their life. On the flip side, some people are saying they want more government involvement because they want the government to solve this problem. Unfortunately, it creates polarization. Globally, the pandemic has put into view the need for multilateral institutions—which the Trump administration has moved away from—but it’s become clear that there needs to be a global health infrastructure. We need systems that share information, knowledge and resources. There’s going to be a vaccine it’s going to have to be globally distributed. So, we need to have global cooperation.