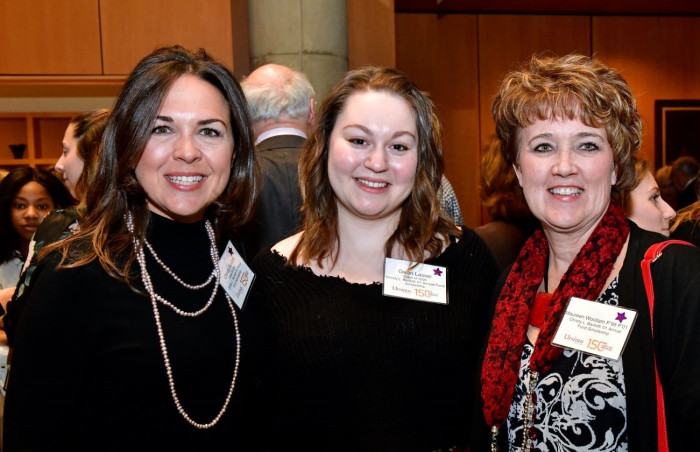 The Gift of Education, Across Generations

Christy Barilotti ’01 has a lot to be thankful for. As the chief executive officer of Barilotti Wealth Strategies, the CERTIFIED FINANCIAL PLANNER™ has been named one of the Philadelphia Business Journal’s 40 Under 40. And yet, for Barilotti, it all started with her education at Ursinus College, and for that she doles much credit to her mother, Maureen Woollam.

“My sisters and I were first-generation college students and without my mom’s encouragement, we wouldn’t have attended college,” said Barilotti.

Both Barilotti and her sister, Laurie DiRosa ’99, received scholarships from Ursinus, which played a prominent role in their ability to pursue a higher education.

With that nudge from their mother, financial assistance from the college and the drive and ambition to pursue her passions, Barilotti made the most of her Ursinus experience and allowed it to set the stage for future success.

“I went into Ursinus as a pre-med student wanting to get a Ph.D. and do AIDS research,” Barilotti said. “By the time I graduated, I had a dual degree in biology and economics. I found a fascination in economics and money! I needed an internship for my major, and without that internship, I would have never become a Certified Financial Planner and financial advisor, or have started my own business.”

Barilotti’s time at Ursinus not only helped to shape her career, but it also enabled her to build lasting and life changing relationships with peers and professors. As a student, she was a member of Phi Alpha Psi and the sorority helped her to “meet friends who became sisters” and she said the friendships will last a lifetime.

She has never lost her perspective of or gratitude for what was made available to her because of Ursinus. For that reason, Barilotti has remained engaged and connected with the college, paying forward—both literally and figuratively—the support she received as an undergraduate. In addition to volunteering as a member of the advisory board for the U-Imagine Center for Integrative and Entrepreneurial Studies and for the office of career and post-graduate development, she created the Christy L. Barilotti ’01 Annual Fund Scholarship.

The scholarship is both an acknowledgment of her mother’s inspiration in pushing Barilotti and her sister to Ursinus, as well as a way for Barilotti to give back so that current Ursinus students are given the same opportunities she was so fortunate to receive. It holds particular preference for students who are first-generation and who are involved in entrepreneurial endeavors, such as starting their own business, and has supported three Ursinus students since its establishment in 2016.

Barilotti has made a point of meeting its recipients through the college’s annual scholarship celebration event. In February, she and her mother had the chance to interact with Gwendolen “Wendy” Lasser ’20, the 2019-20 beneficiary of the fund.

Barilotti described the experience saying, “It’s surreal to come back to campus and then meet someone who you have helped financially attend the school. Meeting recipients with my mom is a way to celebrate our family’s past and our community’s future.”

For Lasser, meeting her Barilotti and her mother in person, and learning about some of their commonalities, was motivational.

“I left the event feeling very inspired by Christy,” she said. “Throughout the night, I talked to Christy and her mother about their lives and her experience in becoming a successful businesswoman. Seeing how successful she became through grit and determination continues to inspire me to do my best work every day and take on challenges that may lead me to opportunities.”

Like Barilotti, Lasser speaks highly of the relationships that she was able to build with the college’s faculty while she was a student, connections she hopes to continue for many years. She describes her educational experience as life changing saying, “Ursinus truly accelerated my self-growth and strengthened my emotional intelligence. I better understand the world around me and my place in it.”

Like so many Ursinus alumni and current students, the college would not have been an option for Lasser if not for the financial aid she received, including from the Christy L. Barilotti ’01 Annual Fund Scholarship.

“I am so grateful to have been selected as a recipient of the Barilotti Annual Fund Scholarship. As someone who struggled financially throughout college, it was a weight off my shoulders to know that I had help from an alumna,” she said.

Lasser hopes to remain involved with Ursinus as an alumna and to not only pay forward the monetary gift that she received through her scholarship, but also serve as a role model and encouraging voice for future students as well. In this way, she is modeling after Barilotti, continuing a generational legacy of impact.

To learn more about Ursinus College’s Annual Fund Scholars Program and how you can establish your own “legacy of impact,” visit our website.