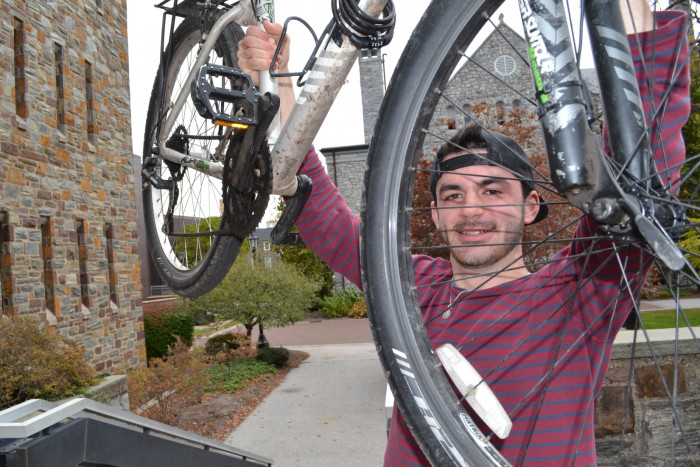 A Passion for Bikes

Connor Murphy has worked hard to engage students with the BikeShare program. There are more than 120 members in the Ursinus BikeShare program, with 50 people signing up in the first month of school.
November 05, 2014

Connor Murphy recently downsized from four wheels, to two. “I’ve always relied on my skateboard to get around everywhere,” says Murphy, a junior. That changed this summer when he spent one month in Holland and began using a bicycle to get to and from class every day. “I became addicted to riding my bike,” says Murphy, an Ursinus College Green Fellow. “I came back here and jumped right into the Bikeshare program.” 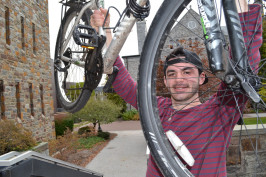 Connor Murphy hopes more students will start using Ursinus BikeShare. Murphy’s passion for cycling led him to ride from campus to Frenchtown, N.J., last month. The trip was a total of 45 miles. His backpack was filled with two days change of clothes, a laptop, charger, toiletries, and books.  “It only took 3 and-a-half hours to get there,” says Murphy who is majoring in philosophy and environmental studies with a minor in applied ethics. The gear added about 25 extra pounds. “That made a significant difference going over bumps at high speeds,” he says. “I also brought two Cliff bars along with over a liter of water, a raincoat, glasses, helmet and gloves. I had a bike pump, a spare tire tube, tools for removing tires, and an Allen key set.”

Murphy also had a very generous friend. “The bike I used was not my own,” he says. James Giebel, a freshman at Ursinus, lent him his mountain bike. Murphy has always wanted to do a long-distance ride. “I have never done anything longer than 30 miles, but I was up for the challenge,” he says.

Though he doesn’t own a bike, he maintains the Ursinus BikeShare fleet and works on the bikes needing repairs. “I do it for free, but when people insist on giving me something I only accept food,” says Murphy, who also is the project coordinator for the Wellness and Outdoor Recreation house. He learned maintenance in high school working at a gas station. He bought a small engine with his first paycheck, then took it apart and rebuilt it to working condition. “I learned everything about fixing bikes here either by simply taking it apart and seeing how the pieces fit together, or comparing it with a functioning bike of the same make and model,” says Murphy. He also finds repair tips on the Internet. “I love getting my hands dirty and cannot resist the temptation to undo a few more bolts and screws to see a little deeper into the workings of a machine,” he says. “Bikes are pretty simple.”

At First-Year Orientation and throughout the semester, Murphy has worked hard to engage students with the BikeShare program, says Brandon Hoover, Sustainability Program Coordinator. “His efforts have resulted in a boost to Bikeshare membership for this time of year,” he says. “Connor also works with a small group of students interested in bike mechanics to keep UC’s fleet of bikes running smoothly.”

There are more than 120 members in the Ursinus BikeShare program, with 50 people signing up in the first month of school. In addition to students, faculty and staff are taking part in the program, too. In 2008, Ray Clarke 2011 and Laura Ng 2009, created the Ursinus BikeShare, the second in the country at the time. Ursinus students embraced it: some 200 signed up, making it one of the largest clubs on campus.