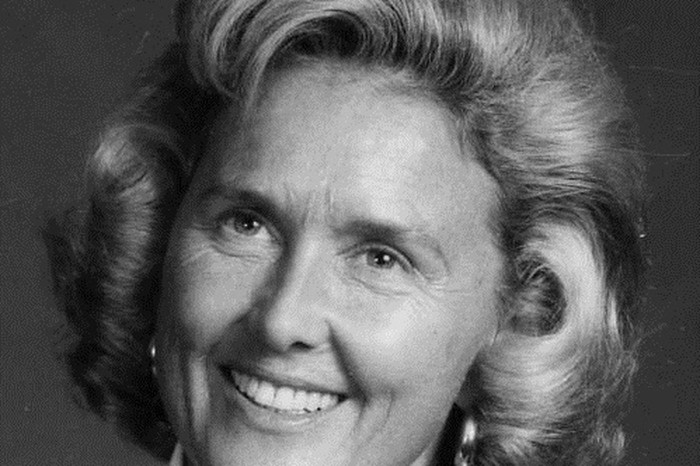 Lewis served as a member of the 147th District of the House of Representatives from 1978 to 1982 and was active politically throughout her lifetime as a Republican Committeewoman. A standout civic leader, she served on several corporate boards over the years, was an Ursinus trustee from 1995 to 2010, and for more than 60 years, served as a trustee and volunteer for the Central Schwenkfelder Church in Worcester, Pa.

Lewis’s generosity was well known to many different institutions, causes, and individuals, including Ursinus. The Lewis family name remains a prominent part of the Ursinus campus today. In 1997, Marilyn and her husband, the late Andrew “Drew” L. Lewis Jr., a former U.S. secretary of transportation, donated $4 million to Ursinus for the construction of the Floy Lewis Bakes Field House, which is named for Drew Lewis’s late sister, Floy Lewis Bakes ’49, a three-sport student-athlete at Ursinus. The field house was officially dedicated in November 2001 and construction also included renovations to Helfferich Hall.

Lewis was also a friend of the Philip and Muriel Berman Museum of Art and her likeness is said to be the inspiration for the J. Seward Johnson Jr. sculpture, Down to Earth VIII, known to the campus community colloquially as “the gardener,” which is located behind the Myrin Library. The bronze sculpture was once on display at the Pennsylvania governor’s residence and came to the Berman Museum in 2010.

A Lansdale resident formerly of Lower Salford Township, Montgomery County, Marilyn Lewis had many hobbies and interests outside of political and civic commitments. She was an avid gardener, cook, baker, and caretaker for animals. She even bungee jumped off the tallest building in Auckland, New Zealand, and skydived when challenged by one of her grandchildren.

She is survived by her two sons, Rusty Lewis and Andy Lewis, 14 grandchildren and 19 great-grandchildren.