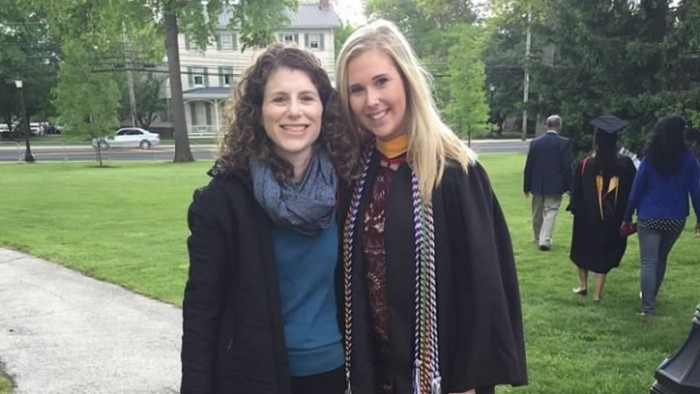 Anna Marks, coordinator of legal studies, and Karla Pisarcik ’17, assistant district attorney in Montgomery County, who will be speaking to the Pre-Law Society about women in law in April.
HomepageNewsPre-Law Society Courts Big Names for Spring Events and Continues Mentorship Program

Shapiro will speak and take questions on Feb. 25. “It’s going to be really interesting,” said Anna Marks, coordinator of legal studies and adviser to pre-law students. “I can’t imagine who wouldn’t be interested in hearing him, but of course I’m a lawyer, so I kind of geek out on that stuff.”

Costello, whom the The Philadelphia Inquirer reports may run for Pennsylvania’s open U.S. Senate seat in 2022, is scheduled for April 7.

Both events are the result of student-led initiatives. Despite the challenges presented by the move to virtual events, Marks has been impressed by the students’ drive to remain engaged and active as a group.

The students are also reaping the benefits of a new student-alumni mentorship program that Marks piloted last year. This semester there are nine current students who have been matched to nine alumni lawyers. “Having a mentor is everything,” said Marks. “Our alumni really want to give back, they want to help, they want to offer what they know, and they want to mentor students.”

Marks is hopeful that at least some of the connections will lead to internship opportunities, but also recognizes the value of the relationship itself. “I think it’s great professional experience, not only substance of it, but also the procedure of it so that the student knows how to make—and keep—a connection.

One senior who will be heading to law school in the fall is Chase Opperman. The psychology and philosophy double major is also a Bonner leader who is hoping to offer free LSAT tutoring as a service project.

“As a student with a learning disability, who derives a great deal of anxiety from formal testing as a result of said disability, I know what it means to have to struggle to achieve my goals,” said Opperman. The LSAT is difficult, and preparing for it can be costly. “I wanted to give back and offer free supplementary instruction to those who would be interested. I performed very well on the LSAT, and believe, despite the fact that I may not be a professional, that if I could help anyone at all through this very difficult process, that would be a victory.”

Opperman intends for this “relatively small courtesy” to pay homage to the college and the people who have helped him.

Reflecting on his senior year, Opperman said, “I have found comfort, structure, and friendship in what spheres of Ursinus still march forward despite our trying circumstances: the pre-law society, in particular. Anna is a mentor of a rare kind; someone who is truly and intrinsically dedicated to the students with whom she works. She enables success in a very literal sense, and I am no exception. My Ursinus experience would not be what it is without her and the Pre-Law Society.”