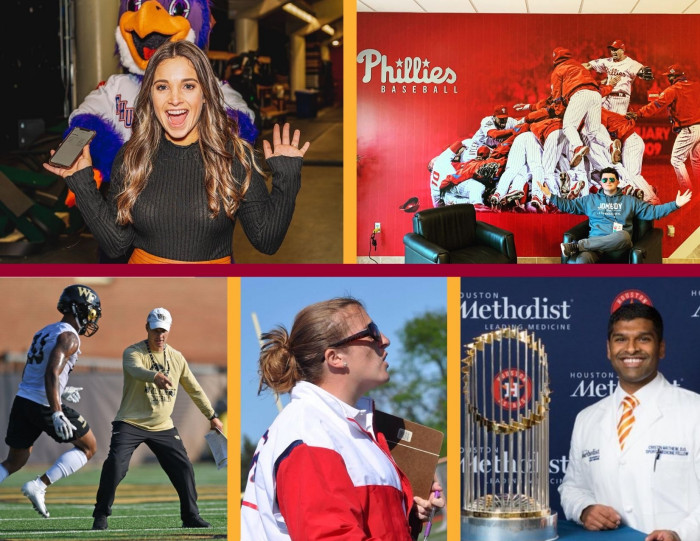 For Love of the Game

Though college athletic careers end, numerous Ursinus alumni have translated their love for their sport into full-time jobs. Lyle Hemphill ’02, Alex (McBride) Ackley ’10, Dana (Feigenbaum) Jackson ’15, David Mendelsohn ’19, and Cristin Mathew ’08 are just a few examples of how our Bears are turning a passion into a career.


The 2020-2021 school year has been a tough one for college athletes. Seasons were cancelled or put on hold due to the COVID-19 pandemic. Though the Centennial Conference has released a plan for playing spring sports safely, many students—seniors especially—missed out on what may be their final seasons.

Though college athletic careers end, numerous Ursinus alumni have translated their love for their sport into full-time jobs. From working as coaches at the collegiate and high school level to pursuing careers in sports media and medicine, these five Ursinus alumni have made careers out of their passion for sport.

From the Field to the Sidelines 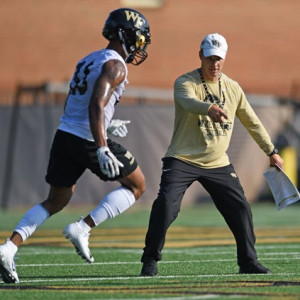 One of the most obvious ways alumni have turned athletics into their professions is by coaching. Lyle Hemphill, Class of 2002 and a former Ursinus football player, has kept his love for the game a part of his life by working as a defensive coordinator at the college level.

Hemphill got his start coaching college football after one of his former coaches at Ursinus contacted him and asked him to coach at Delaware Valley College. Hemphill recalled, “[My future boss] said you need to coach football. You’re a football coach.”

Now, he works for Wake Forest University. He’s taken teams to conference and Big Four championships throughout his career, though he says the most rewarding part of the job has been meeting and working with student-athletes.

“I have a lot of really, really good memories, to be honest with you, of coaching football,” Hemphill said.

Hemphill shares his experience in mentoring students. He recognizes that athletics mentorship can provide students with opportunities to continue and finish their education. 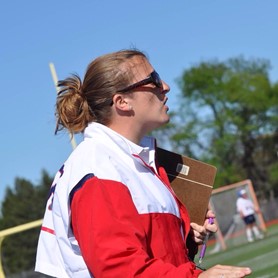 Alex (McBride) Ackley ’10 has also made her passion for sports a part of her career by coaching high school women’s lacrosse, in addition to her job as a business teacher at Washington Township High School in New Jersey.

A former lacrosse player at Ursinus, Ackley worked for Comcast Spectacor, which owns the Philadelphia Flyers, for a few years before making the transition to teaching.

“I definitely always wanted to work in sports,” Ackley said. “Sports have been my outlet, my happy place, and I get super involved in it.”

She’s currently coaching and working at the high school she attended. She says her time as an athlete at Ursinus has helped her come up with drills for the players she coaches. She even finds herself jumping into drills with her student-athletes.

“Now, almost 11 years out of college, I still jump into some drills with them,” Ackley said. 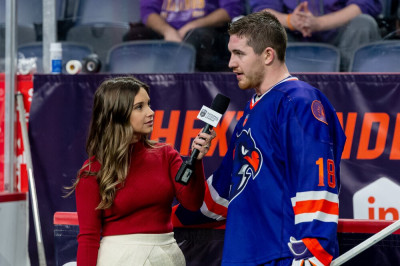 Coaching isn’t the only way alumni have made their love for sports integral to their careers. Several alumni have found success in careers in sports media and public relations.

A former student-athlete on the golf and gymnastics teams, Dana (Feigenbaum) Jackson ’15 got her start working in sports media with the Ursinus athletics department, running social media for teams, announcing games, and updating the website while still a student.

If you are interested in the field of sports media, Jackson states, “it is important to work in the athletic department, if possible, at Ursinus. That really helped kick-start my career and helped me learn what I did and did not like in terms of work.”

During her junior year she interned with Villanova Athletics, where she ran social media for the men’s and women’s basketball teams, men’s lacrosse, and football. After graduation, she went on to work as a game host and a social media manager in addition to other duties for the minor league baseball team, the Hartford Yard Goats.

Jackson will be speaking about her career and post-graduation life on an upcoming episode of the Life After Ursinus podcast. 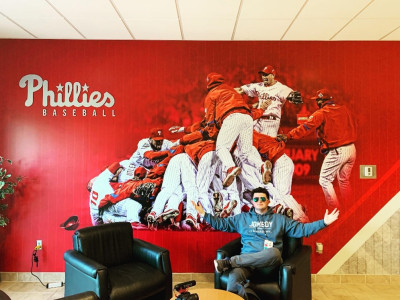 Like Jackson, Dave Mendelsohn ’19 got his start doing communications for the Ursinus athletics department. In that role, he kept score and broadcasted games for nearly every team at UC, while also covering games as the sports editor for The Grizzly.

His work with Ursinus Athletics led to a job at Franklin & Marshall, and now to a job producing the Talkin’ Yanks and Talkin’ Baseball podcasts for Jomboy Media. Through his work, he got to attend the World Series in Dallas and he has become friends and colleagues with former Minnesota Twins and Philadelphia Phillies player Trevor Plouffe.

“In high school, I listened to sports podcasts every day and fell in love with the craft of talking about sports,” Mendelsohn said.

“Even though I don’t do much writing anymore, writing and editing for The Grizzly taught me so many of the skills that I use here. In that role and this one, I’ve learned to just crank out content.”

Career in Athletics? Just What the Doctor Ordered 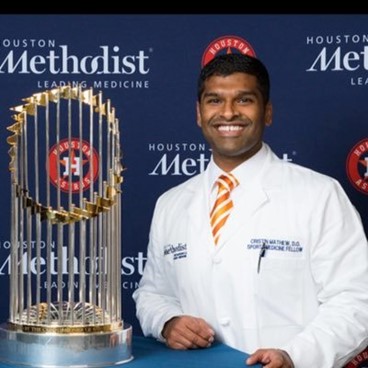 For Cristin Mathew ’06, a career in sports medicine emerged after he faced an injury as a football player in high school.

“I had five surgeries to reconstruct my knee,” Mathew said. “As a former athlete who endured a significant injury and recovery process, I have better insight into the psyche of an athlete.”

During his time at Ursinus, Mathew kept busy: participating in student government, serving as a resident advisor, and playing on the men’s rugby team, all while volunteering his time on weekends to work as a rehab aide in a local hospital. He went on to graduate from Edward Via Virginia College of Osteopathic Medicine in 2012. Now, he works as an orthopedic surgeon sports medicine specialist at All American Orthopedics and Sports Medicine Institute.

In this position, he’s worked with high school and professional teams and he even worked on the medical staff for the Houston Astros during the World Series earlier in his career.

“It was an amazing experience to work with the team and be in the stadium during the first World Series game win for the city,” Mathew said. “Athletes are a special patient population that are highly motivated. I enjoy working with patients […] that push themselves to recovery.”