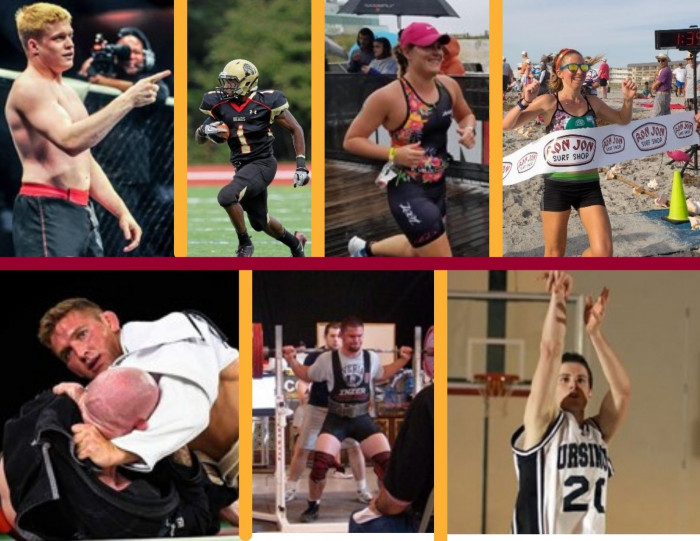 Ursinus alumni Dennis Stanton ’04, Allison (Nolan) Sukolsky ’11, Chris Rountree ’13, Ed Minelli ’11, Molly Serfass ’14, Dylan Royce ’13, and Curtis Watkins ’13 went on to compete in athletics elsewhere after their time at Ursinus. Some of these alumni have found careers, some in an entirely new sport, but they all have continued to proudly show off the competitive spirit so distinct to the UC community.


Ursinus Bears are known for being fierce competitors on and off the field. For a school with over 50 percent of its student body involved in an NCAA or club sport, it’s not hard to find alumni who are down to join a local kickball or softball league. Many alumni still come back during homecoming to compete against the current varsity squads, even if their knees may be a little worse for wear than when they were 18.

For some of Ursinus’s best athletes, a social league or alumni game wasn’t quite enough to satisfy their desire to compete. Instead of retiring to a world of cornhole and trivia, they decided to compete after graduation to see how much their Ursinus experience prepared them for a new division of sports. Some of these alumni have found careers, some an entirely new sport, but they all have continued to proudly show off the competitive spirit so distinct to the UC community.

Competing at a Higher Level 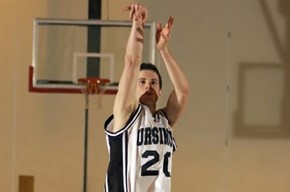 For Dennis Stanton ’04, basketball has always been a way of life. Stanton was part of the 2003 Centennial Conference championship team, which captured the second championship of his career after going 15-0 in conference play. He explained that after graduating he sought out opportunities to play overseas in order to play the game at its highest level: “I was motivated to keep playing because I loved the game and truly enjoyed the challenge of getting better and playing at a higher level each season.” That experience brought him all over Europe, playing in Poland, Italy, Spain, and Denmark. After his retirement, Stanton continued to stay close to the sport and serves as the owner and founder of Every Level Basketball, LLC, along with being the athletic director at Souderton Area High School. 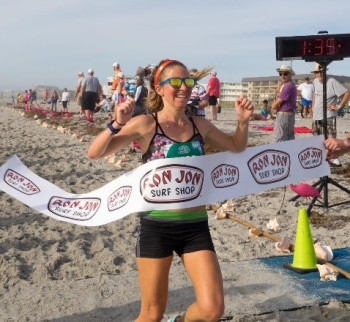 Like Stanton, Alison (Nolan) Sukolsky ’11 found that she had a talent to compete beyond the Centennial Conference. A cross-country and track runner, Sukolsky has been working towards a chance at attending the Olympics in recent years, missing the Olympic trial cut by just 43 seconds in 2019. Sukolsky said running has given her a sense of community, and that her favorite moments from running at UC were the long Sunday runs with the team. Since Ursinus, she has found community within running clubs in Clemson, Gainesville, Palo Alto, Melbourne Beach, and Kailua. Between her running community and the inspiration provided by her dad (who has run 32 Boston Marathons), Ali is continuing to pursue her goal of the Olympic Trials. 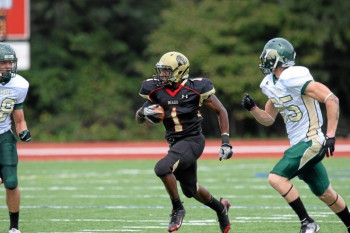 Chris Rountree ’13 also considers his sport as a major part of his identity. He found that even after completing his collegiate football career, his competitive nature kept bringing him back to the field. Rountree shared, “My drive is the love of the game.. I’ve gotten a chance to play against some guys in flag that actually played in the NFL and Arena Ball. In my mind, once an athlete, always an athlete, so my competitive nature keeps me going.” As a former track and football athlete at Ursinus, who tied the interception record as a defensive back, Rountree has continued to compete in high-level flag football leagues, including the Flag Football National Championship. He has also worked to pass on his passion and knowledge of the game, coaching at both the middle school and high school levels. 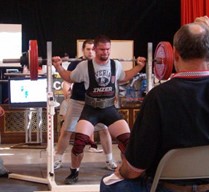 For Ed Minelli ’11, the health benefits of training for a sport have pushed him to continue to compete in a sport outside of his Ursinus experience. A heavyweight wrestler during his time at UC, Minelli found great community both within the wrestling team and at the Ursinus gym. Even without a season to train for, Minelli found himself wanting to continue to work out and push his body to its limits. Minelli has since begun to compete in the sport of powerlifting, which tests squat, bench press, and deadlifting strengths. At a recent meet, he lifted a total of 1,686 pounds between the three lifts, or roughly three grizzly bears. 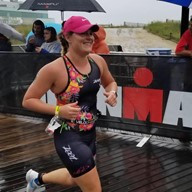 Molly Serfass ’14 also tried her hand at a new sport (or at least two-thirds of one). A swimmer for Ursinus’s first Centennial Conference Championship in women’s swimming, Serfass found that keeping competitive goals has helped her stay balanced in all aspects of her life. One of those goals has been to compete in triathlons, and she is currently training for two half-Ironmans this upcoming summer. She has also competed in several open water races, most notably the Great Chesapeake Bay swim across the bay, which is 4.4 miles on the open water. That’s the equivalent of swimming from Reimert to the Trappe Tavern and back in the open ocean two-and-a-half times. 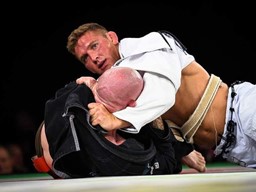 Some Ursinus graduates have put their bodies on the line in a different way post-graduation. Dylan Royce ’13, a former rugby player at Ursinus, continues to compete in professional jiu jitsu. For Royce, training “forces me into a strict routine both mentally and physically and helps me deal with stress more effectively.” As someone who loves to overcome the challenges that come with constant competition, he has been in several high profile jiu jitsu events. 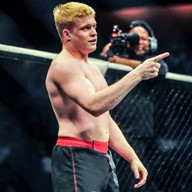 Curtis Watkins ’13 has also competed in both jiu jitsu and mixed martial arts (MMA) fights. As a Centennial Conference champion wrestler, Watkins was looking to see how high of a level he could compete in as a fighter. He managed five MMA fights and was invited to an elite training gym before deciding to retire from the octagon. Curtis said that at the end of the day, “I realized that I could make a good living and not get punched in the face thanks to my Ursinus education.”

Back to the Future

Each of the athletes mentioned above shared that it was the camaraderie and challenge of sports that helped them find a sense of belonging at Ursinus. That feeling of belonging is one that we all as Ursinus alums can share. Whether it was triumphant moments shared amongst teammates like conference championships, or the shared struggle of morning practice, sports helped bring our community together. Those teams got to represent UC all across the northeast, just as these individuals continue to be ambassadors to our community. So for all of us that gave up the morning lifts, the gameday travel, and the thrill of competition when we received our diplomas, we salute our current alumni-athletes for giving it their all after so many of us have retired.