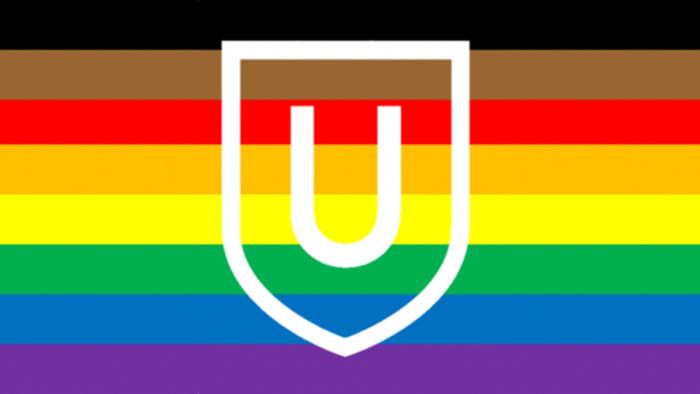 An educational and, at times, moving hour intended to uplift and affirm the LGBTQ+ community—as well as inspire fellow faculty and staff members to adopt some of the suggested practices—was among the many highlights of the Institute for Inclusion and Equity’s annual Pride Week celebration.
April 13, 2021

“My goal is to cultivate empathy,” said Associate Professor of Theater Meghan Brodie at the start of the event, which was titled, “Building an LGBTQ+ Inclusive Campus: Lightning Talks from Ursinus Faculty and Staff.”

“Discussing sexuality, religion, race, disability, ethnicity, and gender expression can be awkward and unsettling for students. Don’t expect or ask [students] to speak for an entire population or share personal experiences they may not want to share,” said Brodie. “We shouldn’t expect anyone to provide commentary on or teach us about other people’s experiences, particularly marginalized people’s experiences and lives.”

Brodie said she also does not read from a roster. “Invite students to introduce themselves. ‘What do you want to be called?’ The ability to name ourselves is fundamental to our sense of self and dignity; there are many reasons we might choose names other than those given to us and these reasons extend beyond gender and sexuality.”

Professor of English and Associate Dean Meredith Goldsmith spoke of creating safe spaces for students, which could be as simple as displaying an ally sticker (available in the IIE) on an office door. In addition to adding her pronouns to her email signature, she also shares her pronouns with her students and invites them to do the same.

In terms of course content, Goldsmith suggests bringing the concept of biography back into discussions. “There was an idea that when you were talking about the life you weren’t paying attention to the art. What I’m trying to do is bring the life back. So, when you’re talking about Walt Whitman, Henry James, Willa Cather, Mary Wilkins Freeman … why not bring those realities of those people’s lives in? Why not make that alive for students? Who these people were, who they had relationships with,” said Goldsmith.

“Even if the content of your class isn’t necessarily about LGBTQ+ issues, what does it mean to be a queer computer scientist, anthropologist, linguist, or historian? These are all people who have lives, and those lives and identities inform their work.”

Manager of Campus Engagement Monique Kelly and Chief Information Officer Gene Spencer discussed the Chosen Name Project. They explained how Ursinus’s information systems have been updated to better reflect the chosen names, pronouns, and gender identities of our community members.

“There’s a lot of effort on campus to make this a more inclusive environment,” said Professor of Theater and Inclusive Community Fellow Domenick Scudera, who shared that his fellowship proposal last year stated that “Ursinus needs greater representation, visibility, support, celebration, recognition and community-building for the LGBTQ+ community.”

“There is a lot going on, but sometimes we just don’t know it, and we just need to be made aware of it, recognize it, and celebrate it.”

An impressive lineup of speakers throughout the week included keynote speaker Charlotte Clymer, a nationally recognized leader in LGBTQ+ advocacy who is a trans woman, military veteran, activist, writer, and former press secretary for the Human Rights Campaign; Rev. Kentina Washington-Leapheart, who led a sexual and spiritual identity workshop that was sponsored by the Harold C. Smith Foundation; spoken word and hip-hop artist Gospel Lee; and former America’s Next Top Model finalist Cory Wade, who spoke at an event hosted by the Gender Sexuality Alliance.

Scudera also led a painting event during which students, faculty and staff were instructed how to create their own version of the LOVE statue on canvas; and Radiance Peer Connections hosted a tie-dye event with shirts and masks.

Activities and events that are still ongoing include the Rainbow Passport Challenge and the Walking LGBTQIA Histories Challenge, which features 13 hidden codes at various sites on campus that detail LGBTQ+ history at Ursinus (take photos at each stop and complete the submission form by April 30 to win a prize); and Diversity in STEM - Solar System Feature Names Workshop (April 16), during which attendees will engage in discussion reflecting on and celebrating diversity in space science, exploration, and STEM. Names of individuals from groups traditionally underrepresented in STEM who have contributed to art, exploration, and science will be compiled and added to a document supporting their candidacy for consideration when Solar System craters are named.