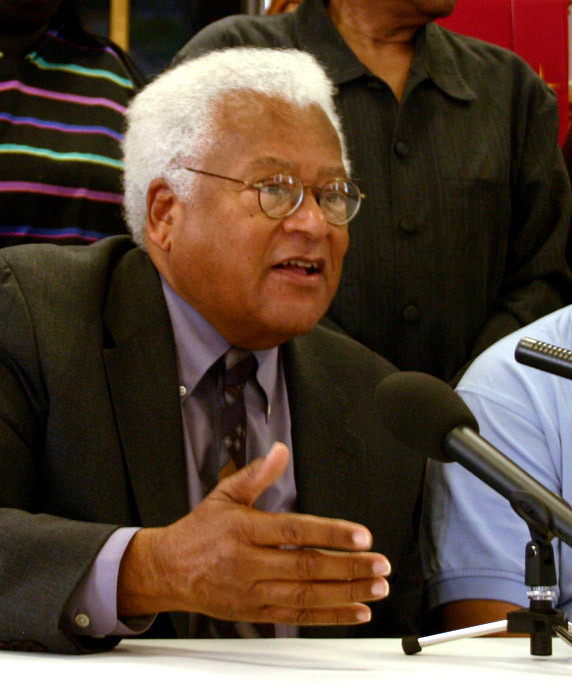 The Ursinus College Institute for Inclusion and Equity and Nexus initiative welcomed the Rev. James M. Lawson Jr. to a virtual event on Thursday, April 29. The 90-minute event, funded by the Harold C. Smith Foundation, was open to the entire community with more than 100 taking part.

After a brief welcome from Christian Rice, assistant dean for civic engagement and the director of the Harold C. Smith Program in Christian Studies, Collegeville Mayor Aidsand Wright-Riggins provided an introduction of Rev. Lawson, calling himself a “pupil or disciple” of Lawson and recalling a workshop where Lawson explained moving “beyond nonviolence as a methodology, but rather as a rule of life.”

Rev. Lawson began his talk on “nonviolence and struggle for change,” setting the stage for his own experiences and describing Mohandas Gandhi’s influence on the nonviolent movement in the United States. He explained why the concept of nonviolence is one word—rather than hyphenated—saying it is “love exercised in every scheme of life. One could even say love as a lifestyle.”

The session’s questions came from faculty, staff, and students on the call. Rev. Lawson shared his experience with the Freedom Riders and the Congress of Racial Equality, explaining the strategies and components of the nonviolent action. Other questions ranged from spiritual to practical, and those especially relevant to current Ursinus students.

The message at the close of the event was again one of love. On moving forward in the challenging political climate in the United States, Lawson referred to a Christian teaching to “love the enemy.” He explained, “If you recognize the enemy… as fellow creatures of God … you give them a chance to change.”

Rice concluded the event with appreciation for Rev. Lawson on behalf of the college “We couldn’t be more thankful for this extraordinary opportunity,” he said.

View a video of the event here.