Digital technology and social media are powerful tools that influence and shape human behavior and opinion. We’ve seen it first-hand when it comes to politics and elections, social justice issues and activism, and even a global pandemic. Three Ursinus experts in media and technology discuss and debate how digital media has influenced—and even helped or harmed—our society. (cover illustration by: Mikala Campbell) 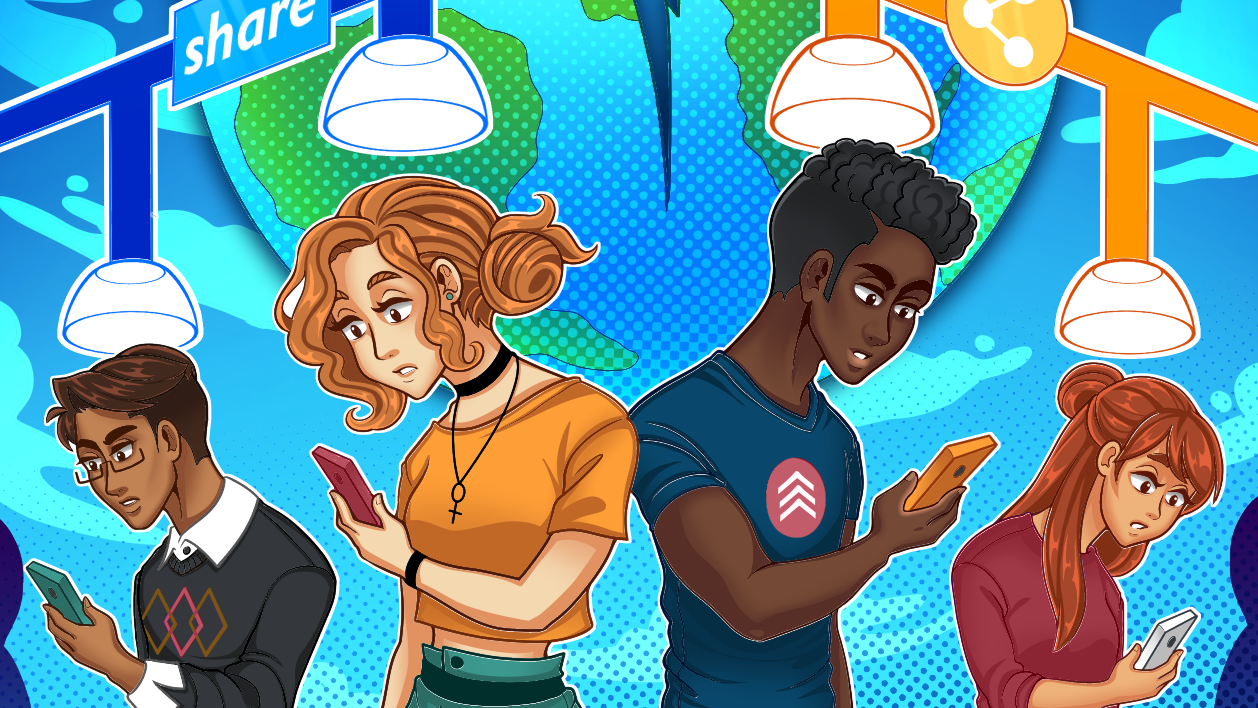 Lynne Edwards is a professor of media and communication studies and a distinguished research fellow with the Annenberg Public Policy Center of the University of Pennsylvania. She has studied the cultural impact of Facebook, race and gender representation in popular media, and cyberbullying.

Anthony Nadler is an associate professor of media and communication studies and a research fellow at Columbia University’s Tow Center for Digital Journalism. His research focuses on conservative news, media, and populism.

Louise Woodstock is an associate professor of media and communication studies whose expertise surrounds the question, “How do people talk about communication?” Most recently, she has researched media resisters—people who avoid media because they believe technology makes interpersonal communication more tenuous.

Ursinus Magazine: The amount of misinformation out there is spreading rapidly and social media seems to be one of the culprits. Is it spinning out of control?

Woodstock: In the U.S.—historically and even today—we like to say that we live in a free market capitalist economy. So, when a new technology is introduced, we say, “Let’s just see how it goes; let the market regulate, not the government.” And then it goes badly. We let the cat out of the bag, and then we ask, “How can we get the cat back in the bag?” That’s what we’ve done with social media. It’s been largely unregulated, in the sense that corporations are not held responsible for the content on their platforms, and we’re seeing these incredibly pernicious effects

Nadler: Louise’s keyword is regulation and so maybe the keyword I would introduce here is infrastructure. A democracy requires media structures and civic forums that help expose people to clashing perspectives. But, how do you arbitrate questions of fact and truth? I don’t think that social media by any means is the only factor that’s making it difficult right now, but social media has been built around a commercial model based on surveillance and targeted advertising. There isn’t an infrastructure for a democratic forum.

Edwards: Social media is what it always has been. It’s basically the biggest game of “Whisper Down the Lane,” in which every person with a keyboard is handed a megaphone and we don’t bother checking where they’re getting their facts. It’s like we’re saying, “These are my friends who are saying things, and I know my goofy friends say goofy things, but wait—they’re citing another person who seems respectable, so clearly, it’s true!” Louise and Tony, let me ask you: Do you think that what we’re talking about comes under the umbrella of moral panic, or do you think it’s different?

Nadler: Great question, Lynne. There’s a good reason to push back against the idea that social media is all to blame; that it’s nothing but a swamp of negativity and misinformation and misdirection. There are always going to be differences of opinion. As internet access first started to become widely available, I think there was a hope that digital media was simply going to empower everyday people—that the technology itself was going to shift control from “top down” to “bottom up” users. At least a couple decades into an internet age now, what we have is a much more complicated reality.

Woodstock: An optimistic utopian ethos often accompanies the introduction of new technologies. It’s the hope that they will make information more accessible so that people will be able to communicate more effectively and thereby create the kind of understandings and agreements that we need to get along. I’ve really never seen a lot of evidence of new technologies accomplish these desirable outcomes. In fact, Silicon Valley has engineered the technology to demand our ongoing attention.

Ursinus Magazine: So, instead of creating forums for engaging in productive conversation, has discourse on social media encouraged even more division? Tony, you recently said that even a devastating pandemic failed to spur a bipartisan sense of national solidarity.

Nadler: People have clashing interests and ideologies. Sometimes you need to just go through polarization and allow these clashing interests to confront each other. I think there’s a good case to be made, though, that there’s a special form of counter-productive division that’s being amplified today. There’s sectarian momentum where opposition and enmity towards different sides spirals and escalates.

Woodstock: Agreed, Tony. To Lynne’s earlier point, depending on the platform, we receive information from people we trust and people we don’t trust. There’s inherent trust when we hear things from family and friends—groups of people that may share common beliefs and characteristics—that decrease our skepticism in a bad way, in a way that allows misinformation to be adopted and spread. In this way, social media could be said to creating some types of unity we would be better off without.

Edwards: There are differences of opinion, yes, but there are also people with bad, hateful intentions. Some of us have always believed that there’s enough good in the world—and there are enough rules—to reign that in, but lately, everything we’ve had faith in is shattered. And so, what I think we’re seeing is not so much a new age of hate and division, but a version of technology that amplifies it.

Ursinus Magazine: Doesn’t digital technology play a role in amplifying the positive, too? Has it allowed people to rally around and shine a brighter light on issues of injustice?

Nadler: I don’t think social media has been the one key a factor spurring rise of new social justice movements over the past decade. That said, social media has opened up possibilities that have enabled activists and organizers to sometimes scale up participation very quickly. And it’s offered a platform for a more diverse array of voice than, say, what you’d have heard on major news broadcasts in the 1980s. But I don’t think social media and news broadcasts are the best comparison.

Woodstock: I do think that people use these platforms to voice critical concerns, but talented researchers been working on communicating across political difference online for decades now and I haven’t seen any real-world improvement. I’ve never really been a believer in this idea that that we’re going to be able to understand each other and collaborate more effectively online. I know there are some instances and ways in which this is true, but we have been humans who interact face to face for exponentially longer than we have communicated through screens and machines.

Edwards: If I’m someone who will get involved in a social justice movement, I’m going to be selectively seeking out that information and then motivated enough to take the next step, which is to act on it. It’s not the technology that’s making me do that. It’s just making it easier for me to find other people like myself. None of us are actually out there looking to be changed or to be persuaded to see the other side.

Ursinus Magazine: Even if users are consciously seeking out like-minded opinions, how do they better separate fact and truth and not spread falsehoods to other users?

Woodstock: Share less. Take a breath and pause and think before sharing information. You can just fire something off in a second without contemplating it first. The speed and spread really creates a lot of problems.

Nadler: People are hopefully going to have a role in shaping and reshaping media environments. There needs to be a collective effort to do that.

Woodstock: Real change has to be systemic and policy driven. We need human rights to be centered in that change.

Edwards: And there has to be some kind of accountability on users when disseminating truth. There is misinformation being trumpeted not only by so-called official news sources, but from things that look official, or from people who we trust to tell us the truth. We don’t have a way to put the genie back in the bottle. We’re sort of free falling. We’re about to come to the end of our bungee cord and we need something that’s going to pull us all back to one platform from which we can maybe disagree, but not be so radically opposed and going in different directions.