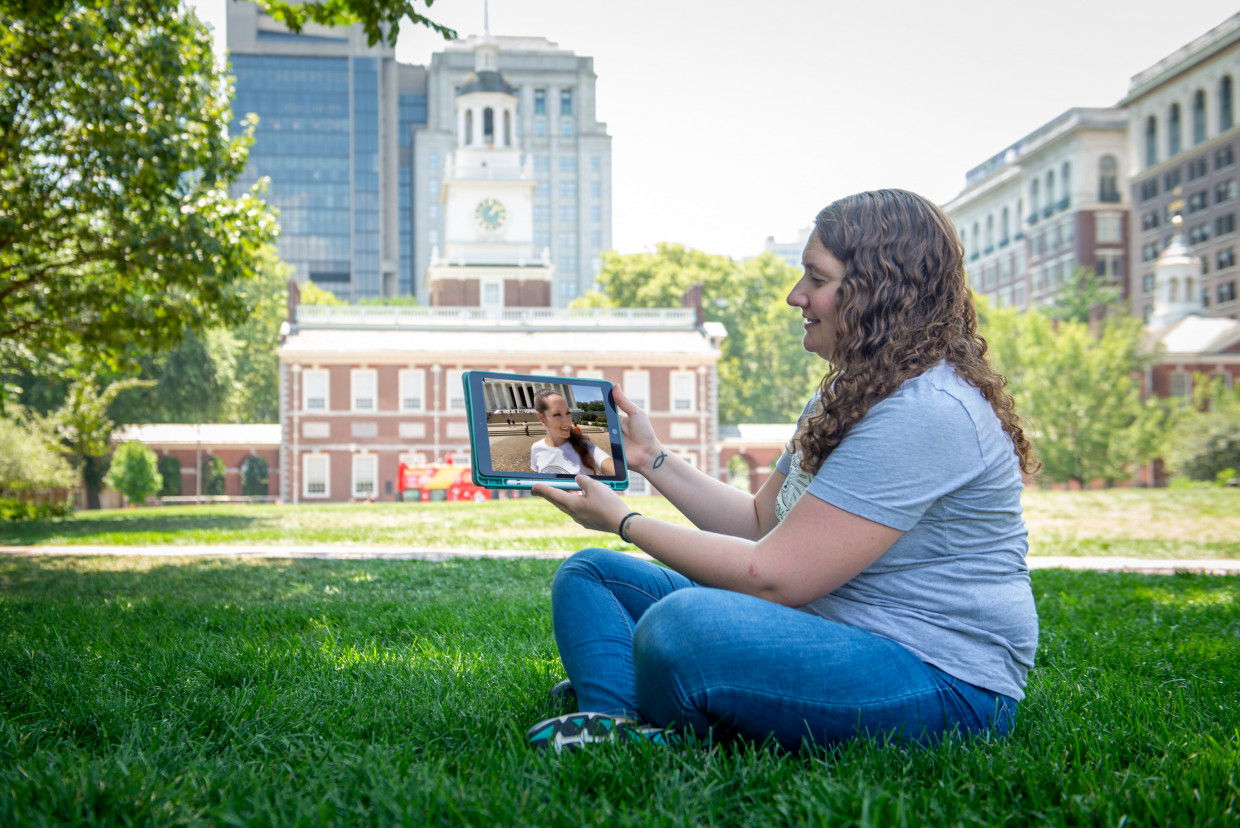 Two Peas in a Pod(cast)

Science, CIE, and a Shared Love of National Treasure
Could one of the keys to an award-winning podcast about the National Treasure film series be the Common Intellectual Experience (CIE)? Although one pair of podcasters did not intentionally set out to draw inspiration from Ursinus’s signature class, they can’t deny the influence the course has had on the creation of National Treasure Hunt, a passion project devoted to their favorite films. 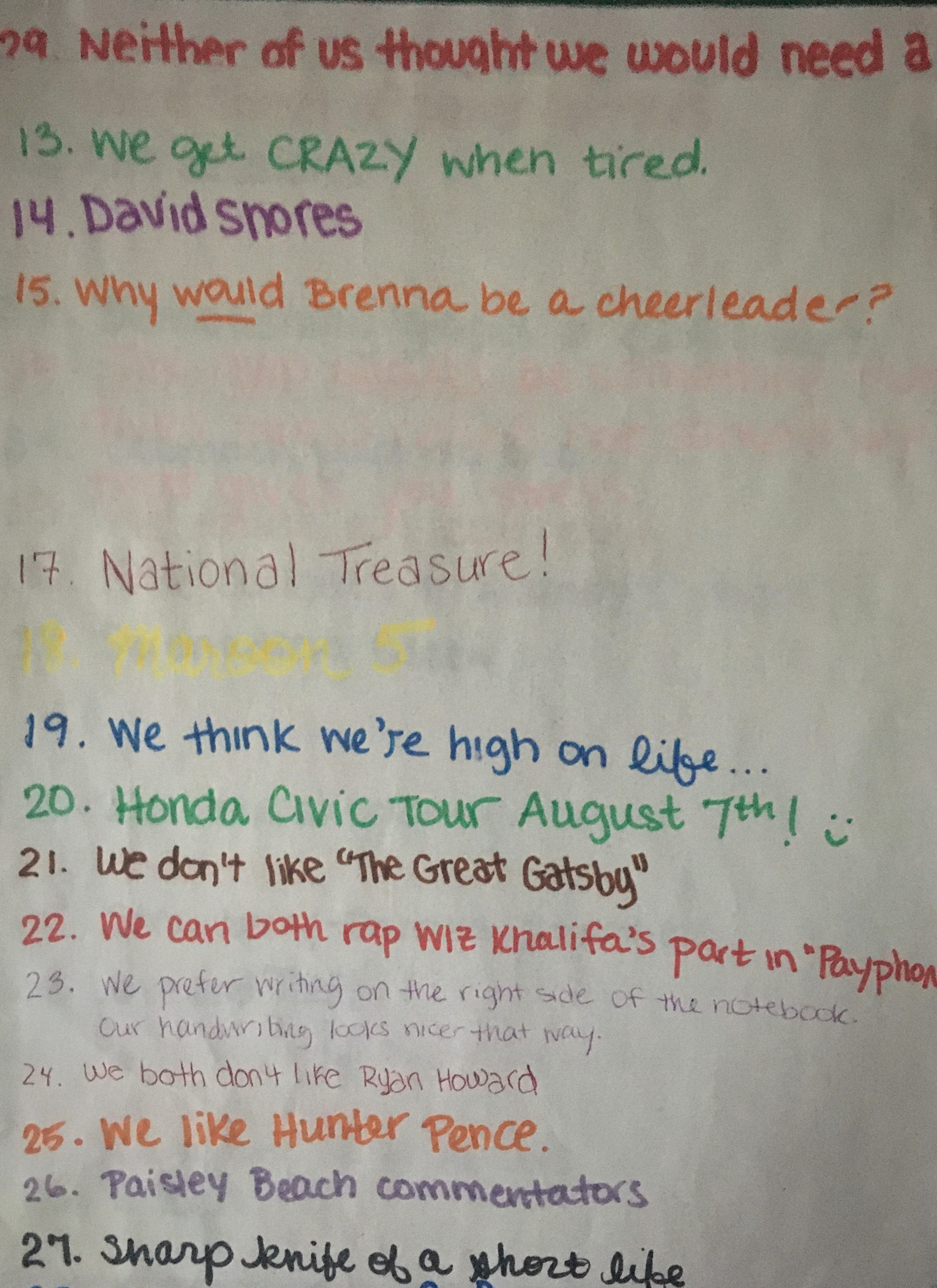 Unlikely roommates list their similarities while sophomores at Ursinus. No.17: the movie National Treasure.Aubrey Paris and Emily Black, both class of 2015, were the best of friends, but—in the eyes of their baffled peers—the unlikeliest of roommates because they had little in common. So little, in fact, that one day they decided to keep track of their similarities on a piece of paper, which they taped to the back of the door in their room sophomore through senior year. Although some items were a bit of a stretch (such as the surprise they both felt when the list itself required more than one page), they managed to come up with more than 50 things over the years, including a shared love of strawberry-banana smoothies and ginger snaps, and a common dislike of shopping and former Phillies first baseman Ryan Howard. And although they both recall it ranking much higher on the list, there in the No. 17 spot right above Maroon 5 sits National Treasure, one of only six entries that warranted an exclamation point.

“Everything about us was very opposite from our sleep schedules to our extracurricular interests, and people found this humorously strange,” said Paris. “So we always used to say, ‘Well, the one thing we do have in common is we both love National Treasure.’”

The films star Nicolas Cage as Benjamin Franklin Gates, a historian on the hunt for hidden treasure. While Paris and Black had already watched both 2004’s National Treasure and 2007’s National Treasure: Books of Secrets “plenty of times” together as roommates, they still included a double feature on their senior-year bucket list, along with a visit to nearby Valley Forge National Historic Park, which is referenced in the first film. Their fandom was undeniable.

Fast-forward to 2020. Black was living in Philadelphia and pursuing a Ph.D. in neuroscience at Drexel University. Paris, having completed her Ph.D. in chemistry and materials science at Princeton University, was living in Washington, D.C., and working at the U.S. Department of State. Enter the COVID-19 quarantine.

“Everyone was newly secluded and sequestered in their personal spaces,” said Paris. “I was really struggling early on when I realized that I didn’t have any hobbies that I could partake in alone in my apartment, aside from binge-watching TV shows and movies.”

Like many a great idea, inspiration struck in the shower. Paris was listening to a podcast that featured a guest who had created an entire podcast dedicated to the Back to the Future film franchise. “I thought, ‘I’m pretty sure there are only, like, three of those movies. How do they make an entire podcast series out of this?’”

Paris, who from 2015 to 2020 served as co-host, writer, and executive producer for ISGP’s The Forum—a scripted podcast series that specialized in contextualizing scientific topics for international audiences—had an idea for a new hobby using skills she already possessed.

“That’s when it hit me. If they can do this with the Back to the Future movies, we can do this with the National Treasure movies.” She got out of the shower and immediately called Black, who was 150 miles away. The pair confess they had done a poor job of keeping in touch up until that point.

“I was so ridiculously skeptical,” said Black, a musician who also had newfound free time on her hands due to canceled gigs. “I’ve been skeptical on every step of this journey, but Aubrey has just said, ‘No, trust me. It’s going to work. It’s going to be worth it.’ And I said, ‘I don’t think people are going to listen to a podcast about National Treasure. I think we’re the only two people in the world who are sufficiently obsessed with it. I don’t know that other people exist.’”

Paris persisted, convincing Black that even if no one listened it would still be a great way for the two to reconnect and have some fun. 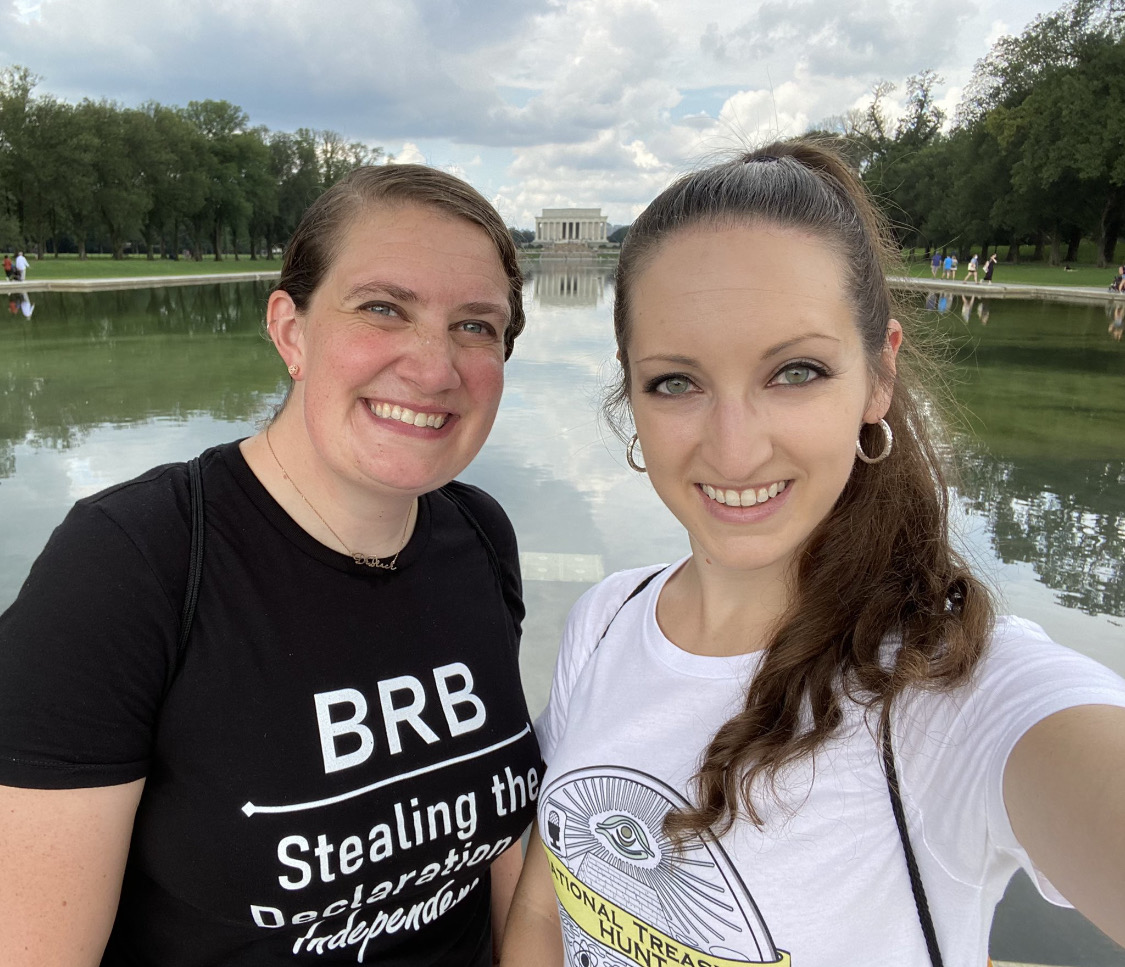 The initial plan was to brainstorm 10 episode topics, which was enough for one season. Once they went through the basics—film recaps, commentaries—the ideas kept coming.

“From there, we could kind of run wild, and I think this is really where we both took a lot of inspiration from Ursinus,” said Paris. “We actually say this a lot on our show because we try to take a really interdisciplinary look at the National Treasure movies and examine them from different perspectives.”

That might include picking out historical plot points and assessing the validity or the fallacy in how they’re presented in the films; determining if science tricks that are used are portrayed legitimately; or—more from Black’s wheelhouse—analyzing how the musical score contributes to the plotline. In one upcoming episode, they plan to discuss the ethics and morality in the films.

“Not to turn something so trivial into something a little bit deep, but it’s an example of how you can really derive meaning and interesting conversation out of something that is a fun family film,” said Paris. “We have conversations all the time on the show about how the movie can relate to current events, or how it can introduce conversations about feminism.”

“I think we both were profoundly impacted by CIE as a class,” said Black. “I was a CIE fellow for a few years and worked with first-year students to develop programs they could attend to help draw meaning from things that might not be considered super meaningful. I think that having that perspective really helped when it came to doing the podcast.”

With nearly 30 episodes available on Apple, Spotify, Soundcloud, Podchaser, and other common podcast platforms—along with an online store for branded National Treasure Hunt merchandise—the podcast now boasts listeners from more than 35 countries, over 3,000 followers on Twitter, and more than 550 followers (including some of the films’ writers) on Instagram. In July, selected from an international pool of 30 nominees, the podcast earned second-place honors in the TV and film category at the 2021 Quite the Podcast Awards.

It comes as no surprise that the pair are considered experts in what Paris calls “the huge community of independent podcasters” that have entire shows dedicated to Nicolas Cage. “I didn’t realize what the fandom around Nicolas Cage was until we got really in depth here.”

The podcast also received attention from an unexpected, though not surprising, fan. Not long after launching the podcast in July of 2020, Paris and Black received messages on LinkedIn and Twitter. “It was along the lines of, ‘My name is Charles Segars, and I am the co-creator of National Treasure. Someone forwarded me your podcast and I just wanted to say thanks for doing this,’” said Paris. “First and foremost, I was astonished. I started Googling and realized, ‘This is legit!’ She replied and told him how important the films have been to herself and Black—and managed to book him as a guest. In the episode, which is part of season one, he discussed the inspiration behind the films, clues that didn’t make the cut, and casting secrets, such as who he initially envisioned playing Benjamin Franklin Gates. (Spoiler alert: It was Will Smith.) The episode ranks as one of the hosts’ favorites—along with the second episode that Segars agreed to do. For that one, he brought producer Oren Aviv with him.

Paris and Black were inspired by Segars’ desire to bring some of our nation’s treasures to those who can’t easily access them. “You might not be able to visit Independence Hall, but you can see a National Treasure movie and learn a little bit about the history,” said Black. “Aubrey and I have really taken that to heart in moving forward with the way that we develop the episodes.”

Whether it’s an interview—such as their “must-listen” chat with Anette Ahrens, the senior interpretive supervisor at George Washington’s Mount Vernon who shared little-known historical facts and as well as behind-the-scenes tidbits regarding filming—or a discussion about artifacts or events, they like to say they’re doing so to give people the opportunity to experience history in a slightly different way. 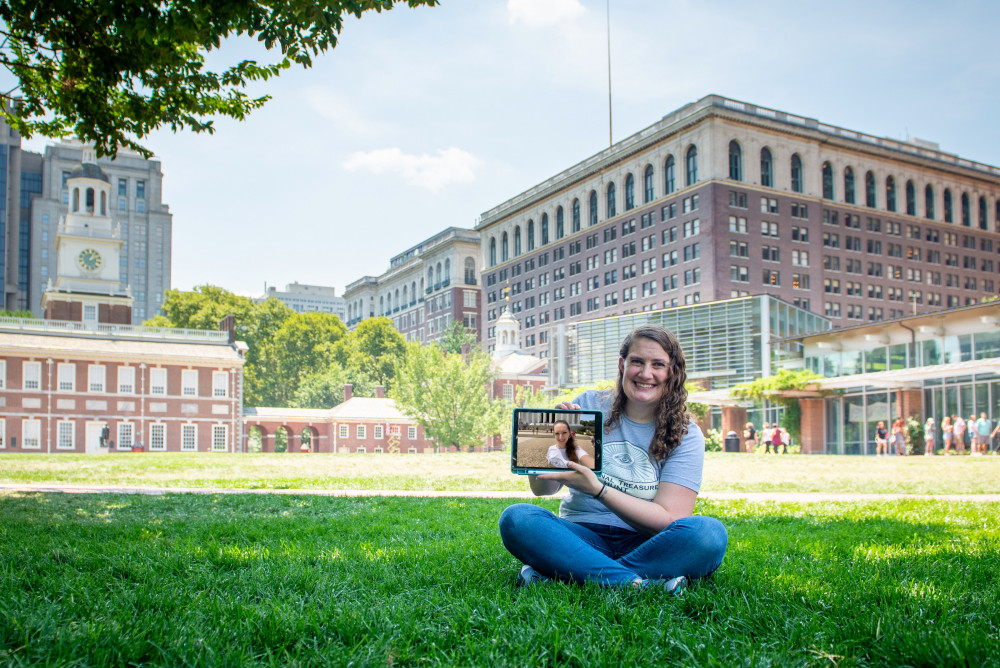 For the scientists, that includes the “National Treasure Lab,” which are segments that put some of the films’ scenes to the test in a DIY sort of way. Black has tried to light cobwebs on fire (her conclusion was that “it depends on the level of dust that has settled on the cobwebs and those particles are the parts that become particularly flammable”), and Paris once enlisted her father to help test the ability of a metal detector to recognize a coin through multiple blocks of ice (they couldn’t detect the coin beyond six to eight inches).

Up next for the pair? They are hoping to one day land Nicolas Cage, Diane Kruger, or Justin Bartha as guests on the show, but in the meantime Paris will continue her work in the Secretary’s Office of Global Women’s Issues, where she is responsible for a portfolio of work related to the intersection between gender issues and climate change; and Black will begin a postdoctoral fellowship at Temple University (with the hope of eventually teaching in her own lab at a liberal arts college).

“Aubrey handles all of the content for social media and public engagement, and I do all of the behind-the-scenes tasks such as audio editing and music producing,” said Black. “The whole experience is just another example of what we really had instilled in us while we were at Ursinus: You can combine the skill sets of two people who don’t have a lot in common and utilize their strengths to find ways to work well together to produce something meaningful.”