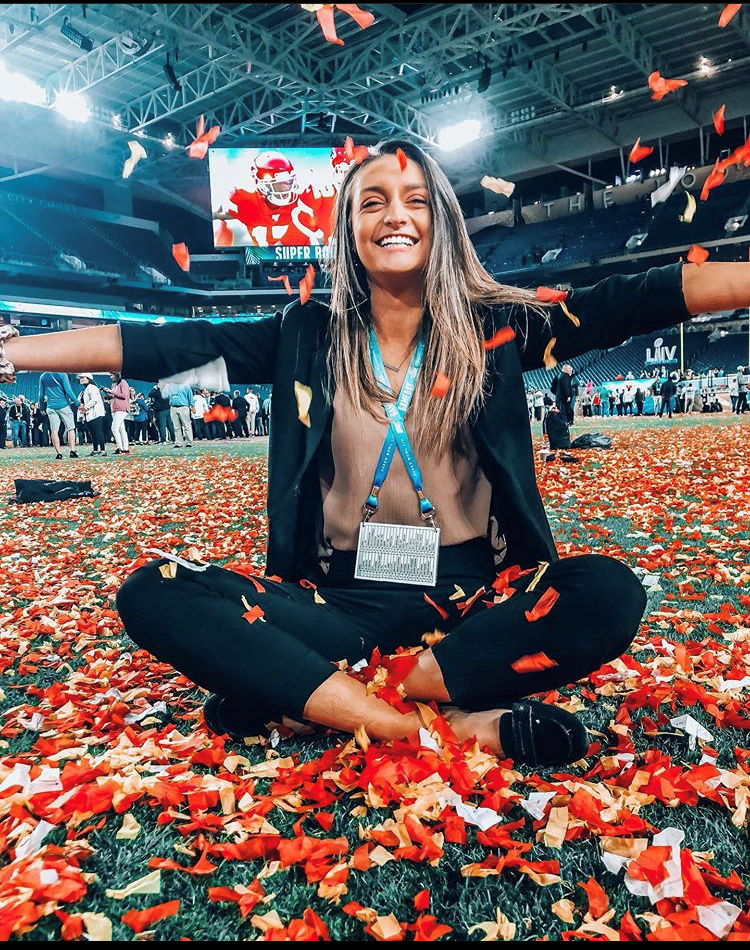 Following a 2017 internship with the Somerset Patriots, a minor league baseball team in her home state of New Jersey, Jill Falduto ’19 knew two things she wanted for the next summer: She wanted to again work in sports—and she wanted to go bigger. So during her junior year, she submitted more than 30 applications in hopes of landing an internship with a larger team. Her efforts paid off when the Miami Dolphins offered her a ticketing operations internship at Hard Rock Stadium for the summer of 2018.
by Jennifer Meininger Wolfe August 29, 2021

Interested in returning to a full-time position with the Dolphins after graduation, Falduto kept in touch with her contacts, and by the end of the fall semester, the applied economics major and statistics minor has secured a position as a business analyst. (Falduto finished early and graduated at the end of the 2018 semester).

In less than three years, Falduto has been promoted to senior business analyst and then manager of business analytics, the title she currently holds. “My main objective is to utilize our data, our insights, and our resources to drive strategic decisions that helps us reach our goals,” said Falduto. Areas she focuses on include revenue, ticket sales, sponsorships, food and beverage, and expense savings, all with the aim of utilizing the space in an efficient way and creating ways to help fans have a better overall experience from start to finish.

“We always say that we’re storytellers,” said Falduto, who estimates she spends 75 percent of her day in PowerPoint. “And it’s not just a slide with bullets. A slide with bullets does not get you anywhere here.” Instead, she uses data visualization tools, heat maps, photos, and charts. “Turning information into a story that you can present and speak to—and have it make sense and be relevant—is something that I really took away from Ursinus and something that has helped me far more than anything else.”

Although her title falls under the Miami Dolphins, a large part of her job pertains to other events held at the stadium, such as concerts, college football and international soccer games, and—coming in the spring of 2022— The Formula 1 Miami Grand Prix. (The racetrack is currently under construction.) “People are surprised to know that only 40 percent of my day is football.”

Among her favorite events are the Miami Open, an annual two-week tennis event, and Super Bowl LIV. “The best moment was after the game,” said Falduto. “Everyone who was working got to go on the field, and we did a champagne toast, and all played in confetti. It was like an out-of-body experience.”

Falduto, who hails from family of University of Alabama fans, also ranks another top moment as inviting her father to the college football national championship when Alabama played. “But it wasn’t even being here. It was calling him and telling him I had tickets and a flight for him that was so cool.”

Indeed, her work is much more than game-day recaps, attendance stats, retail sales totals, and attendance and entrance metrics that drive staffing and security decisions. “When you walk around and see a son and his father sharing a moment watching a touchdown happen and getting so excited, that is something completely intangible that you’re creating; a memory that kid will have forever. All because of the work that we do. Yes, I’m not the one playing on the field, but we’ve created an environment that facilitates that. It makes me emotional because I just know that these moments are resonating with people, and it’s really amazing to be a part of that.”