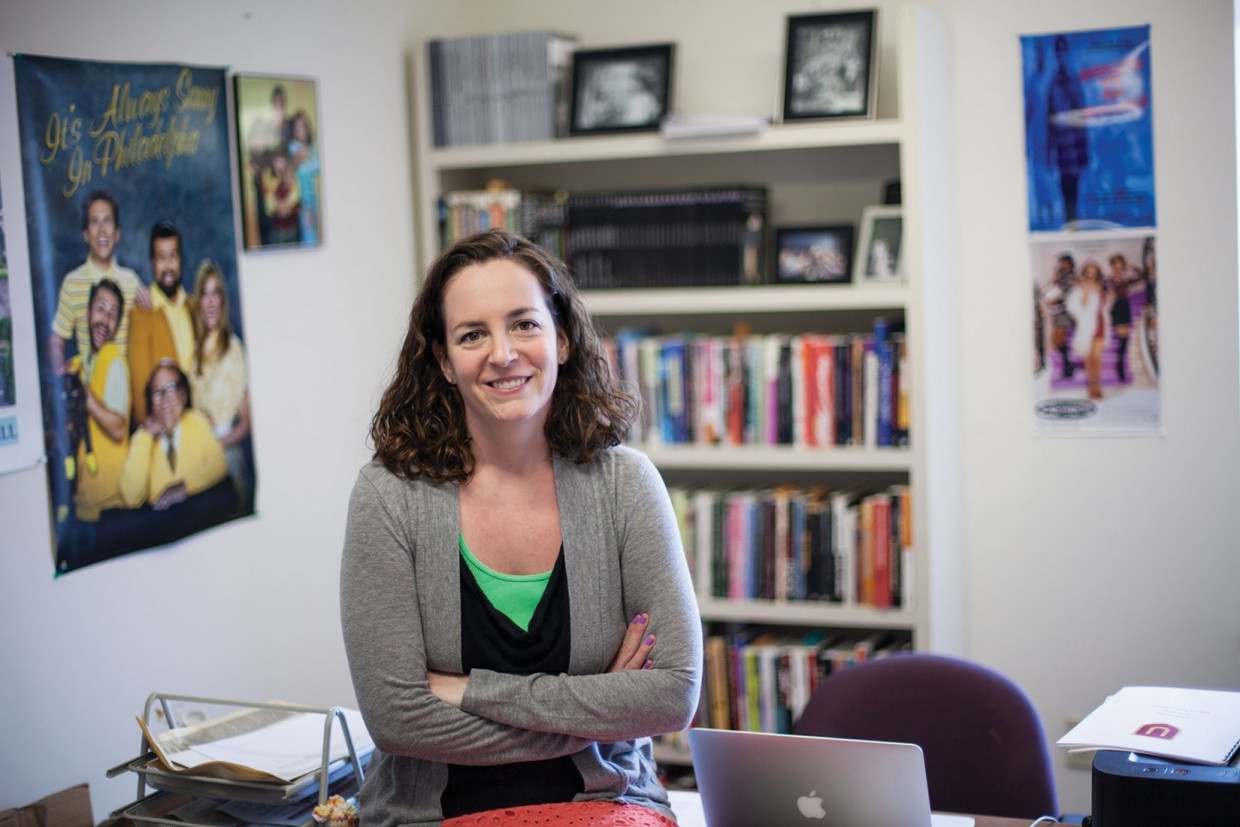 The associate professor of media and communication studies has a new outlet for her lifelong love of pop culture as the co-editor of Celebrity Studies, a peer-reviewed, international scholarly journal dedicated to the interdisciplinary study of celebrity.
August 30, 2021

Ursinus Magazine caught up with her about how celebrities have infiltrated our lives, their social-media influence, and her own recent 15 minutes of fame on CNN.

Get to Know Alice.

She can trace her love of celebrity culture back to childhood.

“I’ve been interested in celebrity for as long as I can remember. I grew up in the 80s on a steady diet of MTV, and as a kid I was obsessed with 80s music icons like Madonna, Guns N Roses, Prince, and Poison.”

As a child of the 80s, her favorite actress may seem surprising.

“I somehow got hooked on the classical Hollywood film actress Katharine Hepburn when I was in elementary school. I had a cardboard cutout of her in my bedroom. I remember every Sunday looking through TV Guide movie listings to see if any of her movies were going to be on TV.”

There’s no use adjusting the dial: celebrities are everywhere—and their influence has grown.

“I think celebrity has infiltrated most aspects of our lives, especially in the social-media era where we’re expected to put a carefully constructed image of ourselves out in the world for public consumption. Of course, we’re also drawn to celebrity for the gossip, the schadenfreude, and for the escapist fantasies of wealth, public adoration, and luxury. But celebrities—including professional athletes, film stars, and Instagram Influencers—also function as models for how to live our lives in a variety of ways. They help set the expectations for how we all behave at various life stages and in various identity categories.”

As the author of TV Family Values: Gender, Domestic Labor, and 1980s Sitcoms, she recently shared her expertise on CNN’s History of the Sitcom.

“I was approached by the producers of the series initially to discuss the popularity of family sitcoms in the 1980s, but we ended up discussing a ton of different series from different eras—I Love Lucy, Taxi, Alice, Saved by the Bell, and my personal favorite, It’s Always Sunny in Philadelphia. The interview was a bit of a bizarre experience, because it was during the pandemic, pre-vaccine, so the protocols were very rigid, and I had barely left my house for months. Many of the ‘perks’ we might associate with being involved in a TV production weren’t possible. I drove myself from Philly to the set in Manhattan, was filmed talking to a producer via an iPad for three hours, then drove directly home.” Watch a Clip

The teen demographic—and its marketability in the 80s and 90s—is her current focus.

“My current research is on the convergence of teen media—especially film, television, and popular music in the 1980s and 1990s. Film and popular music had targeted teens for decades, but television was slow to develop its teen appeal. With the expansion of cable and the increased conglomeration of media companies in the 1980s, film, television, and music came together to target teens in more pronounced and interconnected ways.”

Although her role as co-editor is a fairly recent development, she has been involved with Celebrity Studies since 2010.

“I’ve been involved in a number of capacities over the years—I’ve published in it, I’ve peer-reviewed for it, and a few years ago I co-edited a special issue on reality TV celebrity with Dr. Erin Meyers of Oakland University, who has been co-editor for three years. The role of co-editor is both an honor and a huge responsibility—one I agreed to take on before the pandemic! I’m responsible for managing the process of peer review, putting together each issue and keeping up with the production schedule, overseeing special issues, and normally, the journal sponsors an international conference every two years. It’s an exciting opportunity to help shape the field and see all the impressive work being done on celebrity around the world.”

If she could see one additional season of a canceled TV show, which one would it be?

“This is a tough question, especially given the media industries’ obsession with reboots and spin-offs. Several years ago, I would have said Twin Peaks, which ended on a disturbing cliffhanger, but Showtime recently revived it. I thought Mad Men had a great finale, but I would love another season. I would like to see more of Netflix’s Mindhunter, which follows FBI agents investigating serial killers. The show seemed to be hinting that one agent’s son would turn out to be a murderer, and I am desperate to know his fate!”