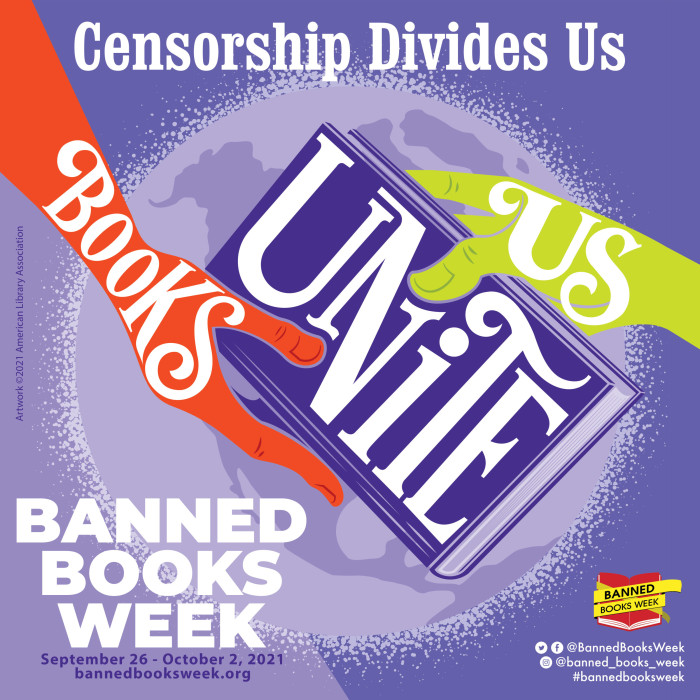 The Banned Books Week Coalition’s theme this year – “Books Unite Us. Censorship Divides Us” – emphasizes the ways in which books and information bring people together, help individuals see themselves in the stories of others, and aid the development of empathy and understanding for people from other backgrounds. The annual event takes place September 26 – October 2, 2021.
September 29, 2021

Think banning books is a thing of the past? Unfortunately, not so much. Just this month, CNN reported on a controversy in York, PA (just a couple of hours away from Ursinus) stemming from a decision in which “the all-White school board unanimously banned a list of educational resources that included a children’s book about Rosa Parks, Malala Yousafzai’s autobiography and CNN’s Sesame Street town hall on racism.” Censorship battles are fought on the local level all over the country, especially when it comes to what’s included in school curricula. Though the York school board recently reinstated access to the books after community backlash, this story highlights the reality that it takes vigilance, advocacy and action to combat censorship.

The Banned Books Week Coalition is an international alliance of diverse organizations joined by a commitment to increase awareness of the annual celebration of the freedom to read. This year’s Banned Books Week coincides with the release of the American Library Association’s Top 10 Most Challenged Books list. This year’s list includes titles that address racism and racial justice, as well as those that shared the stories of Black, Indigenous, or people of color. As with previous years, LGBTQ+ content also dominated the list:

Visit bannedbooksweek.org and follow their social media for updates on Coalition events and resources.

We in Myrin encourage you, as ever, to read widely and broadly, exploring with a curious spirit, an open mind and a critical sensibility. Let us know if there’s anything you want us to order for our collection!