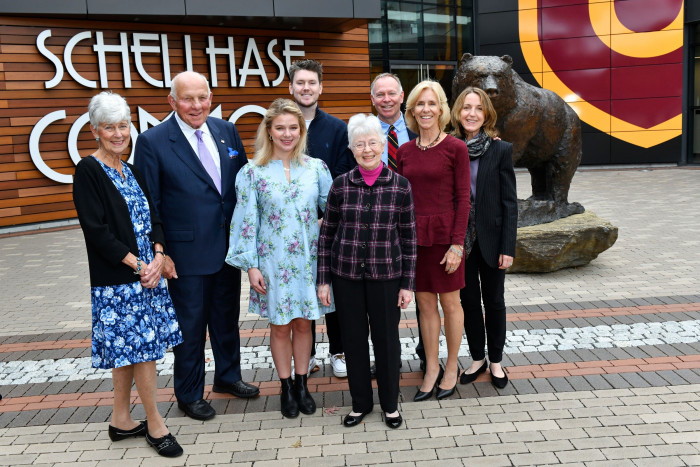 Kay Kerper Schellhase ’57 (center) is surrounded by Joan and Will Abele ’61 (left) and members of her family during the dedication of the Schellhase Commons.
HomepageNewsCommons Officially Dedicated in Honor of Schellhase

It is named for Richard T. Schellhase ’45 and his wife, Kay Kerper Schellhase ’57. Members of the Schellhase family attended an intimate ceremony on Friday, October 22.

The Schellhase Commons—the welcoming gateway to the Ursinus College campus that sits on the corner of Main Street and Fifth Avenue—was officially dedicated in honor of its namesake during an intimate ceremony on Friday, October 22.

Thanks to the generosity of trustee Will ’61 and Joan Abele, the 17,305-square-foot two story building is named for former assistant professor of religion, wrestling coach, and executive secretary for the alumni association Richard T. Schellhase ’45 and his wife, Kay Kerper Schellhase ’57.

Richard Schellhase, who passed away in February 2020, was a mentor to Will Abele during his time at Ursinus. During the dedication ceremony, Will Abele said, “Most of all, my wish is that through this building, the Schellhase Commons, the very best of him will continue for generations.”

In front of a small audience that included many members of the Schellhase family, including Kay Schellhase and her children and grandchildren, Abele recounted the impact that Schellhase had on his life, and the generosity he showed him throughout the years. He said, “Richard epitomized the highest of academic standards, reflected in everything he ever wrote, or spoke, or shared with others. He imbued each and every one of those who encountered him with his thoughts, intellectual references, and powerful questions.”

“Richard was also the best in teaching, coaching, and mentoring … I know I’m one of the many whose lives he touched,” Abele said.

Abele often speaks about the influence that Schellhase had in shaping his own philanthropy and has said that Schellhase told him, “Someday this is going to be your responsibility.” The Abeles sponsor the Richard T. Schellhase ’45 Essay Prize in Ethics every year.

“We truly are overwhelmed by the generosity and the thoughtfulness that went into this gift,” said Richard’s and Kay’s daughter, Janet Schellhase Dial.

The Commons incorporates historic Keigwin Hall and includes the Café 2020 coffeehouse, the campus bookstore, and a “home base” for the college’s admissions team comprised of 10 offices for admissions counselors. It connects generations of Ursinus students, serving as the place that prospective students and their families come when they first step foot on campus; a popular gathering spot for current students; and a home for the thousands of alumni that return to Collegeville throughout the year.