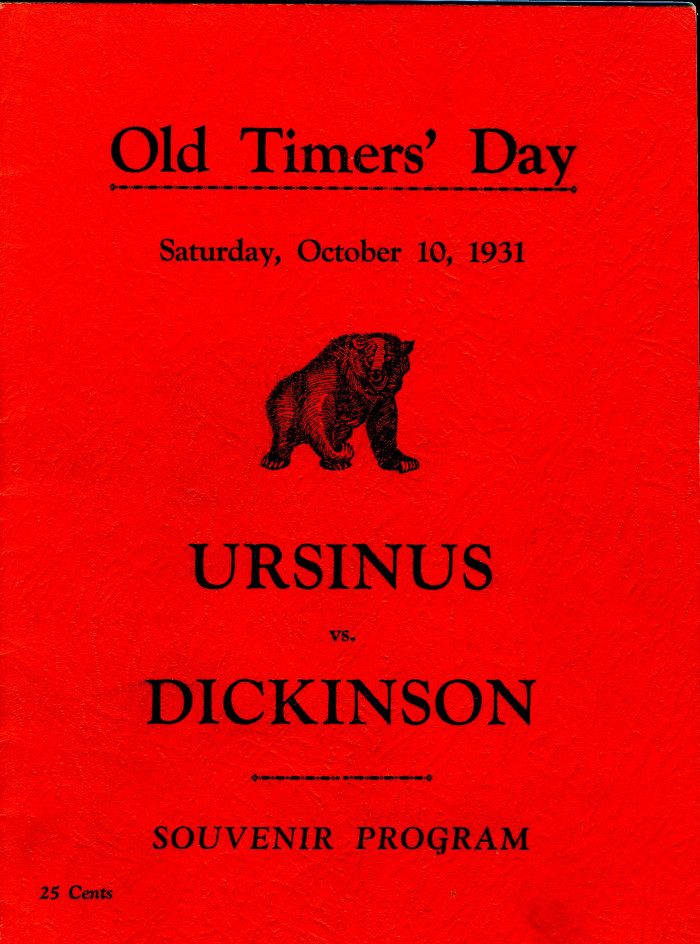 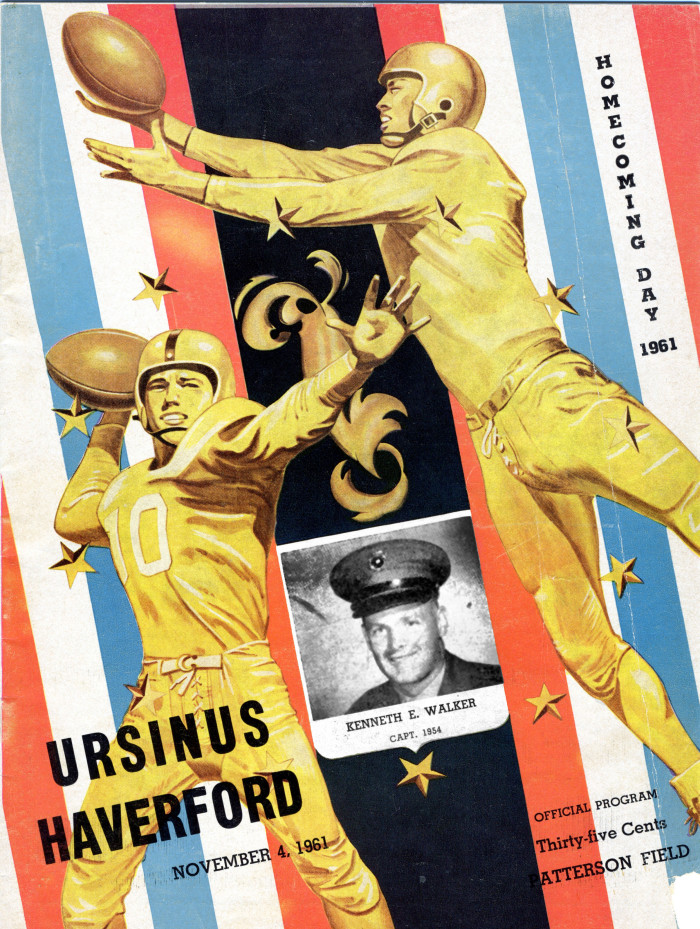 This coming weekend, October 30th and 31st, Ursinus celebrates Homecoming with students, faculty, staff, and alumni. We went back into the archives to highlight the history of Homecoming, which begins a century ago.

“Old Timers! Ursinus needs you here next Saturday. Every man who has ever worn the football uniform at Ursinus is wanted—and needed… Do not fail us!”

“SCORES RETURN ON OLD TIMER’S DAY: Old stars among those who vie with students in cheering… At the game they were much in evidence, yelling along the side-lines … It put increased enthusiasm in the students when they saw how these alumni … still took such intense interest in the old school. Old Timers’ Day might well become a regular institution at Ursinus.” The Ursinus Weekly, October 31, 1921.

And indeed, it did become a 40-year tradition! 90 years ago, the Old Timers’ Day Souvenir Program from 1931 featured this “College Yell”:

As the Bulletin reported in November of 1961, this new Homecoming Day was a big success: “Enjoying the 75-degree heat on November 4, 1,500 alumni returned for the Homecoming festivities. Ursinus beat Haverford 22-6 on the gridiron and six fraternity queens, Miss Pennsylvania, and Miss Liberty Bowl (both Ursinus beauties) made up a half-time parade which added beauty to the battle!”

At the November 1963 Homecoming game, the Ursinus Weekly reported that: “At half-time, the Ursinus Marching Band went through its paces and the Fraternity Queens were driven around the track to the tune of ‘A Pretty Girl is Like a Melody.’ Miss Carol Heber, a senior English major from Philadelphia, was crowned queen. … Earlier in the afternoon, the soccer team defeated the Alumni 4-2 in a hard-fought contest… Homecoming festivities ended with a free dance sponsored jointly by the Men’s Student Government Association and the Women’s Student Government Association.”

Fifty years ago, on the ten-year anniversary of Homecoming Day, October 30, 1971, the Bears lost to the Tornadoes of Geneva College 62-7. Even though the score was less than stellar, the Ursinus Weekly from November 4th reported that “the enthusiasm appeared to span the ages” at Homecoming. The four skydivers from the United Parachute Club of Gilbertsville who jumped from more than 7000 feet with smoke flares affixed to their ankles and landed on the 50-yard line during the football game’s half-time show surely helped to liven things up! “We have never heard such cheering from every voice in the bleachers as there was when the parachutists neared the landing target.” Festivities also included a roving Dixieland band, an alumni vs. varsity soccer game, an alumni vs. old timers field hockey game, cross country team rushes, a campus parade featuring the Mt. Carmel Mounties Band and the Homecoming Queen candidates, a concert featuring singer-songwriter Steve Grimm, and, of course, the Homecoming Dance.

This year’s homecoming is sure to carry on the many lively and beloved Homecoming traditions that have been a part of Ursinus College for 100 years. Go Bears!