For more than two-and-a-half decades, Joyce Henry (1927-2011) had top billing on Ursinus College Theater’s marquee. She was its leading lady, a fixture of the stage when theater wasn’t even an academic major in Collegeville. Henry was instrumental in bringing theater in a formal way—and an academic way—to the college.

Henry was hired to teach in the English department and “to advise the drama club” in 1972. There was no theater—just a small stage in Lower Wismer Center.

Scudera
When Joyce started, theater was not even an academic discipline on campus. It existed and was vibrant, but it was something of an extracurricular activity for students. She was finding a way into the academic world that existed here by bringing her work into different departments. She laid the foundation for a theater and dance program to happen.

Jaroff
She introduced acting classes, independent studies in directing and playwriting, and founded proTheatre. Back in the late 1970s, I was a proud early member of that merry band who managed to produce amazing shows in the other half of a Quonset hut we shared with the bookstore on what is now the site of Olin Hall. We had few resources, but a lot of heart, and Dr. Henry was the driving force behind it all.

In 1973, Henry received permission to use the old gym in Ritter Center for productions since Helfferich Gym had just opened. But Ursinus theater did not fully operate out of Ritter until 1981, when the gym was transformed into a black box theater.

Brodie
That tiny black box in Ritter had orange shag carpeting out in the lobby, but I would say that the heart of those productions absolutely matches the heart of what we do over here [in the Kaleidoscope Performing Arts Center, which opened in 2005]. We just have more professional resources to teach students and make that work accessible to a broader audience now.

Henry produced and directed more than 50 plays from 1981 until her retirement in 1999, all without theater designers or technicians on staff. Eventually, theater became part of the Communication Studies and Theater Department.

Scudera
Joyce was essentially running a one-woman theater company. She not only was the lead artist, creating the shows and directing all of the shows, but she also was responsible for the financial end of things.

Jaroff
Dr. Henry directed one Shakespeare play every year, but also introduced Ursinus audiences to then-new playwrights such as Wendy Wasserstein or avant-garde theater stalwarts like Bertolt Brecht. In short, she shocked us, challenged us, engaged us, and changed us. All for the better.

Brodie
She was such a vibrant personality and—very much like Domenick—was someone I would consider a feminist director who paid attention to the roles for women. When I was a student, that was something I learned from both Joyce and from Domenick, and when I got into graduate school, I realized that many of my peers did not have that kind of education.

Scudera was hired in 1997 first as a director and then became an assistant professor of theater, working side-by-side with Henry.

Brodie
I got to work with Joyce and with Domenick on Mother Courage [during which Henry performed]. To see her perform after she had been teaching for so many years … she was an absolute powerhouse.

Scudera
There’s a student painting [outside of his office in the Kaleidoscope] of Mother Courage. I think that’s probably my favorite memory of Joyce. It must have been her last semester and she took on a giant role, and it was just so meaningful to me to have that artistic connection with her in that one production.

Henry’s legacy lives on in the plays that Scudera and Brodie direct today and they plan to digitize her collection of archives. They also hope to one day honor her by naming the Blackbox Studio Theater in the Kaleidoscope in her honor.

Scudera
These files had been sitting in my own office for some time and every once in a while I actually would flip through to just see the different things that she had done. But most of this—and especially the recordings—has been stored in a box and no one has listened to or watched any of it in about 20 years.

Brodie
Joyce’s really careful and smart stewardship of these archives shows that she and Domenick were doing a whole lot with very little. It’s like a time capsule of technology.

Jaroff
Her legacy lives on now in the Kaleidoscope, but I treasure my memories building sets, designing lights, and sometimes even performing for some of the best plays ever produced at Ursinus by an amazingly talented director and devoted lover of theater.

Special thanks to Domenick Scudera for providing the historical timeline of events for this story. 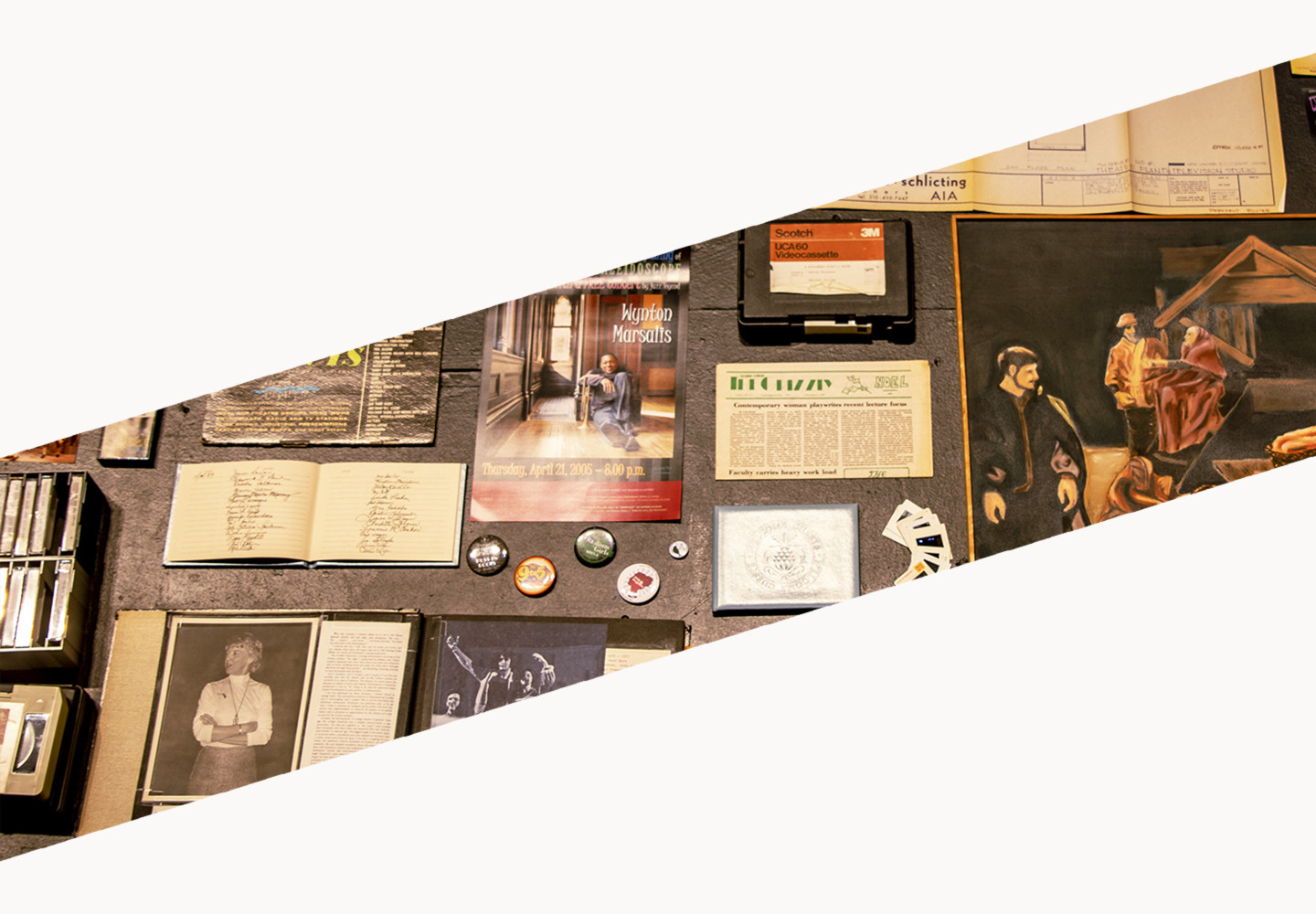 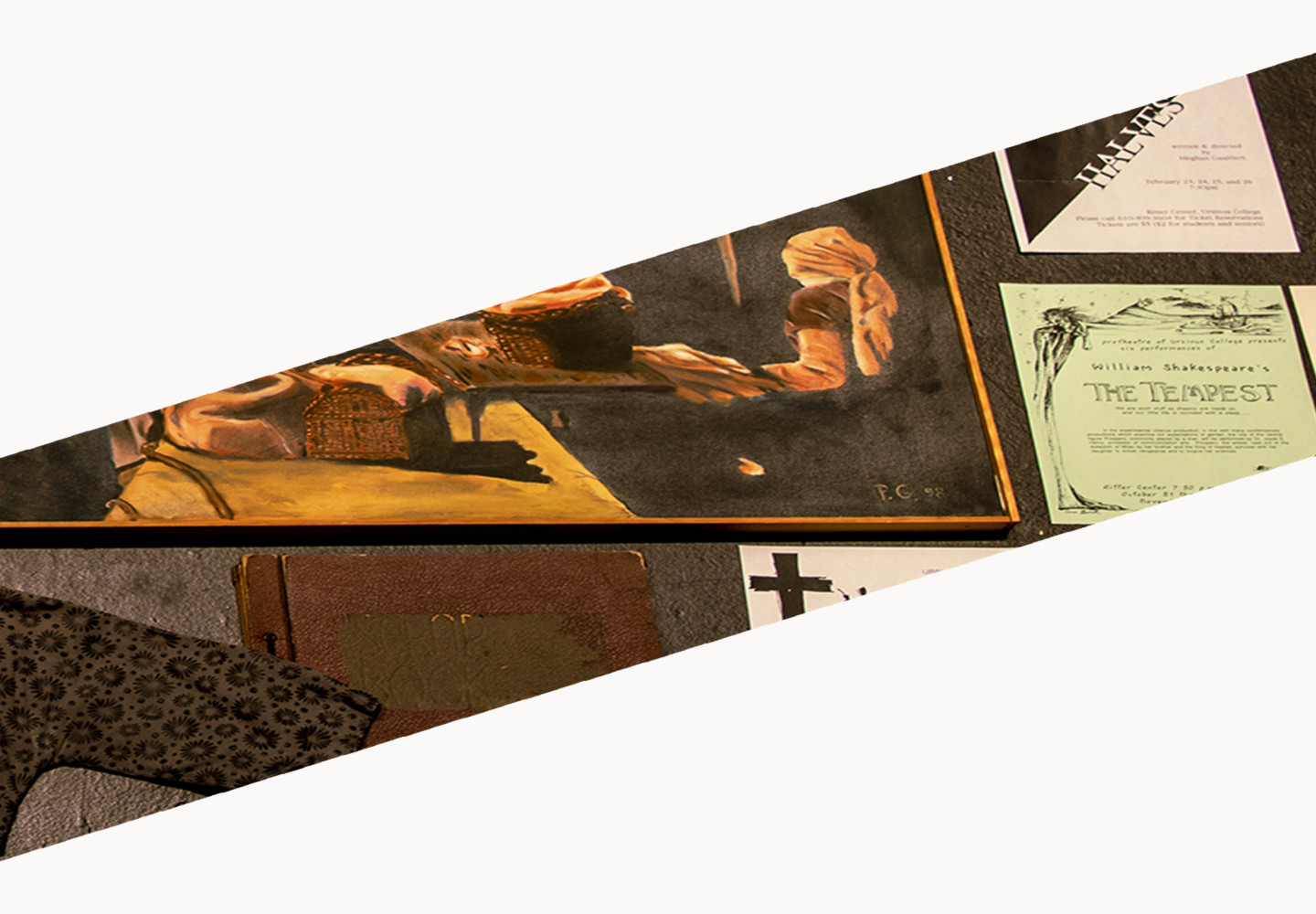