In 2014, Professor of History C. Dallett Hemphill (1959-2015) had been more than a dozen years cancer free. Then, in the midst of living an anything-but-ordinary life of teaching classes and writing her third book, she found out the cancer was back. Following a memorial for the late professor, a community of colleagues and former students—all of them scholars, and all of them her biggest fans—rallied to make sure her final book got past the finish line and that her final pages were published. While this piece was intended to be a story primarily about that book, Philadelphia Stories: People and Their Places in Early America, it’s impossible to separate the story of the book from the story of the relationships that Hemphill built. 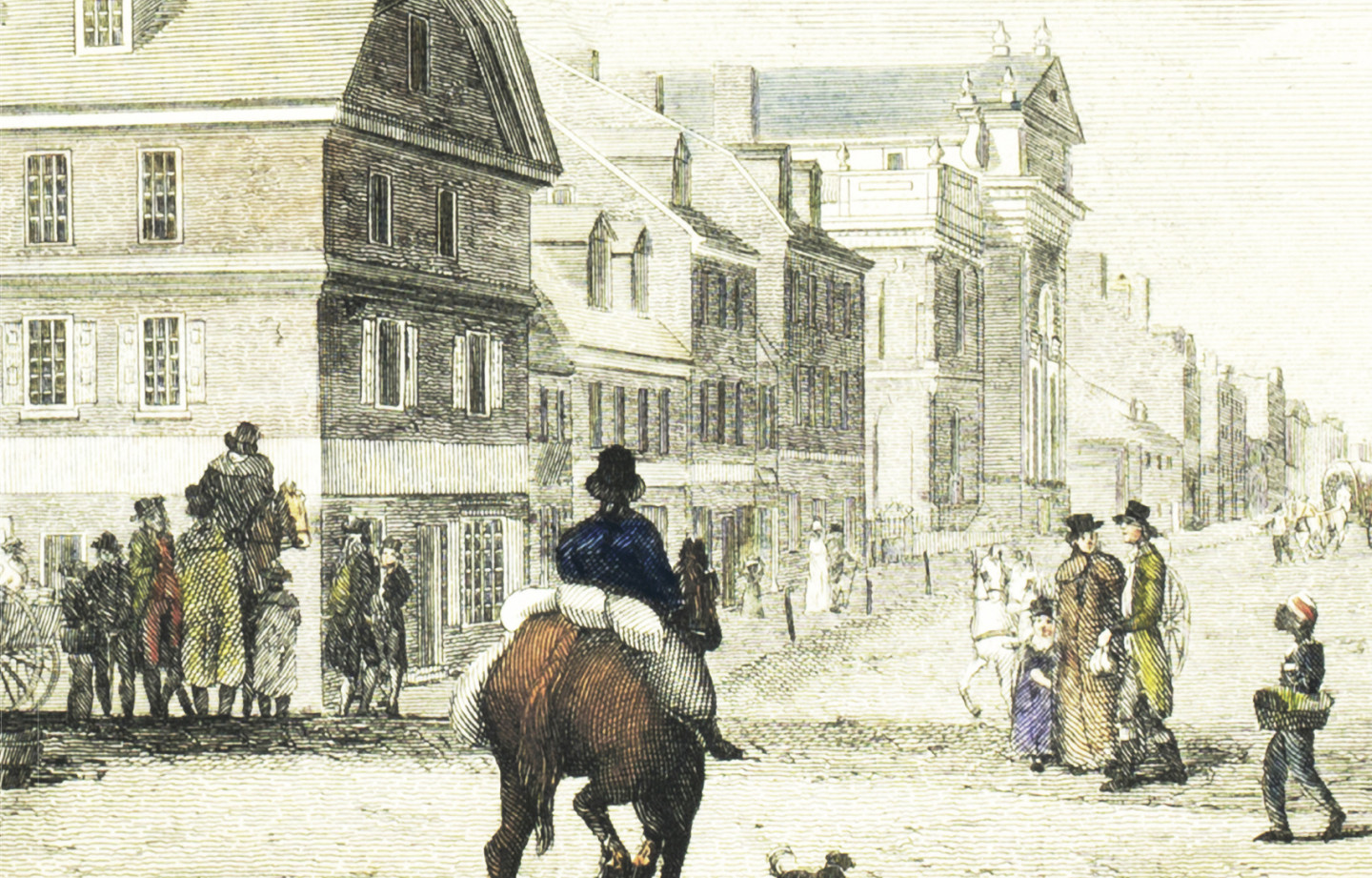 In 1995, Hugh Clark, professor emeritus of history and East Asian studies, was chair of the history department. While carpooling to work with Hemphill one day, she matter-of-factly told him that she had breast cancer. The discussion largely ended there. In the coming days, weeks, and months, she went to her treatments, and didn’t miss a day of work, as far as Clark can recall. “She wasn’t one to wallow in having aggressive cancer,” he said. “She forged ahead, and she beat it. Well, we thought she did.”

In 2001, she again received a breast cancer diagnosis and, for the second time in six years, underwent a mastectomy and chemotherapy. “She was a fighter like no one else I have ever met,” said her husband, John Hill.

By 2011, the scholar of early American history had authored two books, both published by Oxford University Press: Bowing to Necessities: A History of Manners in America, 1620 to 1860 and Siblings: Brothers and Sisters in American History. Hailing from a family with deep Philadelphia roots, Hemphill’s third book was more personal: a collection of biographies about some of the city’s lesser-known figures, two of whom were her ancestors. But in 2014, as she was pulling from family archives to tell their stories, she told Clark, “It’s back.”

“She’d been working on the book for quite a long time. And I think she knew, although she didn’t talk about it, that there was a race between finishing the book and losing the battle with cancer.”

Indeed, not long before she died, Hemphill told Rodney Hessinger ’92, that she would edit the manuscript while walking on a treadmill. “This was her daily routine to keep her going. It was like she was trying to get to the finish line,” said Hessinger.

He and his former professor shared an interesting trajectory. The very first class he took at Ursinus was among the first that Hemphill taught at Ursinus after being hired in 1987. Later, as a graduate student, he helped edit her first book, and she eventually served as the outside leader on his dissertation. “We were sort of following these parallel paths with a gap of 10 years,” said Hessinger, who is now associate dean for humanities and social sciences, and professor of history at John Carroll University. “As we got older, we became friends, but she was certainly my mentor from the get-go.”

Outside of Ursinus, Hemphill was a star—but humble—presence at the University of Pennsylvania’s McNeil Center for Early American Studies, which is a consortium of roughly 30 schools. It’s a scholarly community where seasoned and upcoming historians alike can give and receive feedback on their work. Hemphill was a regular participant in the weekly Friday seminars and, at times, chair of the advisory council. She introduced Hessinger to the center, and he was even awarded a fellowship there as a graduate student.

The McNeil Center is also where Hemphill met Daniel Richter P’07. Close professional colleagues, and friends, too, they knew each other for 25 years. “It’s hard to recreate the experience of being in an academic seminar with Dallett,” said Richter, who is the Roy F. and Jeannette P. Nichols Professor of American History at the University of Pennsylvania. “It didn’t matter what the topic was, she always had something brilliant to say about it. And it always came from a real place of care and concern, particularly for supporting younger scholars and getting them to make their work the best it could be. She always took over a room in the best kind of way, and I think everybody who knew her kind of felt like if you were talking to her, you were the only person who mattered in the world.”

As if channeling the thoughts of all who were aware of Hemphill’s final manuscript—and how close she had come to finishing it—it was Hessinger and Richter who spearheaded a collaboration to put the finishing touches on her years of work.

“Many hands make light work,” said Hessinger. “We invited people to do the final editing work on each of the individual chapters. Because it’s a series of 12 biographies, we figured we could find people who were experts on these particular figures, or, at least, who would have some angle on these 12 individuals. We identified people who we thought were appropriate, and sent emails to each of them.”

Very quickly, they had the volunteers needed to complete the 12 chapters. “They all were so fond of Dallett both as an intellectual presence and as a personal presence that they were eager to do everything they could to help with this project,” said Richter.

With help from Hemphill’s husband, her files were obtained, and the group of chapter editors gathered at the McNeil Center in Philadelphia in May 2016 to talk through their general approach. “One of the delicate things is, this is Dallett’s book; it’s not ours. But she left the chapters in various degrees of finished states. You had to make some decisions about how much you’re putting your own voice in there, and how much you’re just trying to make Dallett’s voice come out, and that’s always a judgment call,” said Richter. “One of the things that she certainly would not have wanted was to have her prose be seen when it was not as polished as it should be. So we had to talk through that and figure out how we could best honor her legacy, but also make her work as polished and professional as she would have wanted it to be.”

Richter and Hessinger were the book’s general editors, ensuring consistency of the text, managing the project, working with the publisher (which was, fittingly, University of Pennsylvania Press due to Hemphill’s connection to the McNeil Center), and, between them, penning three prologues and the foreword. Hessinger also served as a chapter editor. They and the other chapter editors also identified photographs for use, obtained copyright permissions, and completed the footnotes and acknowledgements.

Like Hessinger, another chapter editor, Nenette Luarca-Shoaf, was connected to Hemphill through both Ursinus and the McNeil Center. Luarca-Shoaf, who edited the book’s chapter on painter Charles Willson Peale, was the coordinator of Ursinus’s Philadelphia Connection program when she first met Hemphill. Later, she earned a dissertation fellowship at the McNeil Center, and then went on to teach classes at Ursinus for two semesters. (Her husband is Matt Shoaf, a previous associate professor of art history.)

Lisa Minardi ’04 was also one of the 12 chapter editors. She was only 16 when she first took one of Hemphill’s classes. As a junior at Perkiomen Valley High School, Minardi had exhausted all of the school’s offerings in history and decided to enroll in “Colonial American History,” a three-hour—and 300-level—evening course.

After the first class ended an hour early, Hemphill found Minardi sitting on a curb waiting for her mother to pick her up. Hemphill sat down and waited with her. Sixty minutes’ worth of discussion flew by.

It didn’t take long into the semester for Hemphill to encourage Minardi to apply to Ursinus as a history major. “I already loved early American history, but it was her personality and her really approachable style of teaching and mentoring that really hooked me,” said Minardi.

As part of that first class, Minardi did a research paper on Henry Muhlenberg, the patriarch of the Lutheran Church in the United States, after discovering his journals in Myrin Library. With Hemphill as her adviser, Minardi also focused on Muhlenberg for her senior thesis project, and then eventually for her master’s thesis work.

Now the executive director of Historic Trappe, Minardi was an obvious choice to edit Hemphill’s chapter on Muhlenberg in Philadelphia Stories.

“It was really interesting reading another historian’s distilling of Muhlenberg’s life and biography,” said Minardi. “Part of her effort with this book was weaving together the lives of these disparate people as much as she could, and so she really highlighted connections between Muhlenberg and other clergymen, for example, from different denominations.

“Dallett was such a tremendous mentor and scholar. It was sad enough to lose her, but to also lose this great book project that she was working on was just a bridge too far for all of us involved, so we all felt really motivated to make this happen for Dallett and for the field of early American history. There’s important material here. Many of these people have not been studied or written about much before. She pulled them all together, with different ethnic groups and religious groups, and she touched on so many topics. These are stories that had to be told.” 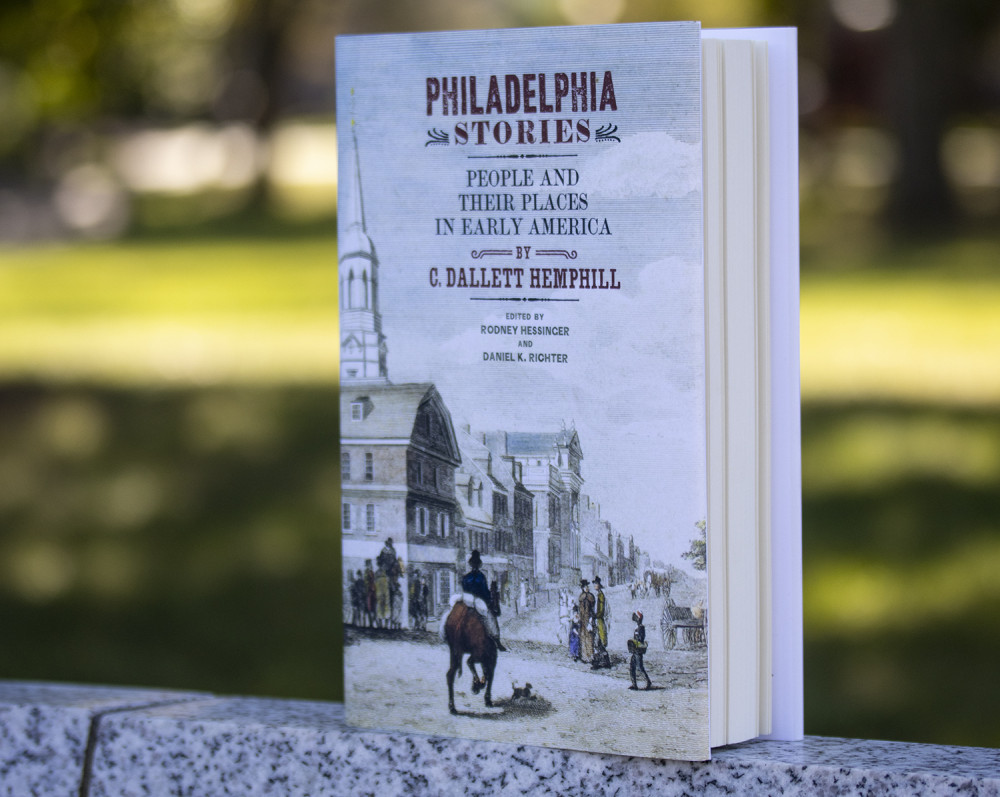 “I think one of the things she really was trying to do in this book was to get beyond the sort of narrow scholarly audience and write a book that ordinary people would want to read. It was a very personal project for her, particularly because so much of it depended on research on her own family papers, people who were her own ancestors,” said Richter. “It brought together an awful lot of things that were very personally important to Dallett, as a teacher, a scholar, and as a human being.”

For Hessinger, the project is a fulfillment of her vision. “If you read the book cover to cover, the lives of all the different characters intersect. She was able to draw upon this community that spans generations, and if you think about the way the community came together to help complete her work, then in all these various ways, she’s manifesting community. To me, what was so meaningful is that we could come together to honor that vision, but if she hadn’t created this community, then we couldn’t have called upon it to do that, so it was just a completion of that legacy.”

Alumni who matriculated into the college between the years of 1997 and 2013 may remember Hemphill even if they never took one of her classes. For 13 of the 17 convocations during that time frame, from the stage in Bomberger Auditorium, Hemphill delivered a talk to incoming first-year students. “A Brief History of Ursinus College,” penned by Hemphill, focused largely on Minerva Weinberger, the college’s first female student, who went on to become valedictorian in 1884.

“That talk was a staple,” said Hugh Clark. “It was very consistent with what she was trying to do in Philadelphia Stories. It took a personal narrative and made a real person out of Minerva to address an audience of young people coming into Ursinus to be Minerva. It made the convocation much more relatable than it might have been without a story like that.”