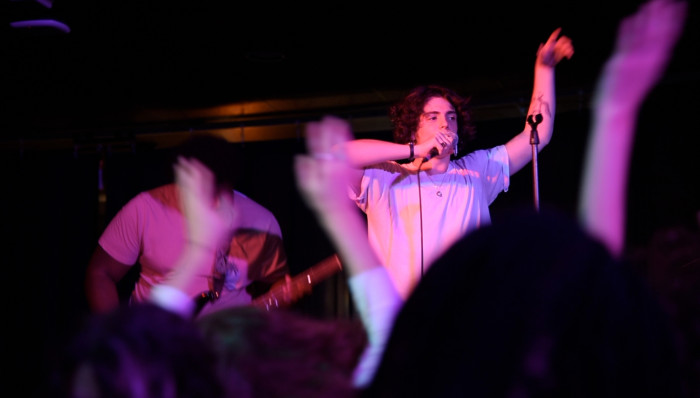 Today, Abbie Painter ’23 is a rock star, theater scholarship recipient, psychologist, and non-binary luminary. Eighteen years ago, they were drumming on their dad’s workout equipment. Painter’s evolution since then, especially from 2019 when they stepped on the Ursinus stage, has been a feat of transformation.

Painter, who has been a singer since childhood, plays venues every weekend with Naked Lake, a queer-focused band that has twice performed on campus.

The first was in September of 2020, just weeks after the band had formed. The challenge? Painter and bandmate Jordan Hartsfield had three weeks to fill out their band, rehearse a full setlist, and land on a name that represented their mission.

“We were talking about fluidity and authenticity and really just being and living as an entity that kind of goes like this,” says Painter, alternating their arms in loose, gentle motions, as if underwater. The focus was on “just really being all that you are and not covering up.”

Fourteen months and many, many shows later, Painter understands the band as “a creation of queerness rooted in curiosity.”

Once the full band was together, Painter taught the group some songs recorded when Painter was 17. With only a guitar, a USB converter, an old Mac, and a free copy of GarageBand, Painter put together a 10-song album in their bedroom, with experimental loops and production quality that would make you think they rented a New York recording studio.

People would listen and ask, “Who produced it?” To which Painter would respond, “What do you mean? I did it in my bedroom.”

As a full unit, the band went on to create an EP entitled Dreaming Of, which they recorded onto pink and blue splattered cassette tapes designed by Nadia El-Mourli ’24. Recently, the band amped up their tour schedule, playing shows every weekend in Philadelphia, New Jersey, Connecticut, Baltimore, and of course, outside Ursinus’s Kaleidoscope Performing Arts Center.

Painter has been performing their whole life, and you can tell by watching them work the audience from the stage. They are a natural party-starter whose love for psychology stems from a desire to connect with everybody they meet.

Painter heard about the Ursinus theater scholarship as a high school senior, and applied with an interview, a monologue, and an acting workshop. The scholarship goes to an applicant with talent, commitment, and leadership. On and off the stage, Painter exhibits all three. After winning the scholarship that year, they made the commitment to become a Bear.

“The reason why I am able to … endorse myself,” Painter says, “is because I have been putting myself out there for so long, willingly on stage, and learning other identities and having different identities flow through me.”

In 2020, around the same time as Naked Lake’s inception, Painter began testosterone hormone therapy. More comfortable in their own body, Painter took their story on the road with the band. A Naked Lake performance is so enthralling because it’s authentic, fun, groovy, and inclusive. The focus is always on connection and interacting with the world.

“For me, performing is communicating with people by telling your story and listening to others,” says Painter.

Twenty-one years into the telling, this performer’s story has only begun.

What brings me joy is when I listen and observe. What brings me joy is when I take what I listened to, and take what I observed, and further explore it. When I do these things, I find I can authentically create myself without the influence of outside values, and creating myself enables me to do all these external things like writing music, creating films, going on walks while listening to songs on repeat (because when I find a song I like, it’s the only one I will be listening to for a while).

I am non-binary and am on testosterone, which people are often shocked by because I am not a trans man. Those features are part of what I am. They are favorable to me and align with me, not any other norm. Who has decided that having an increasing amount of hair on one’s body, or having a lower voice, or having broader shoulders, correlates to masculinity? I am existing healthily because I am listening to myself.