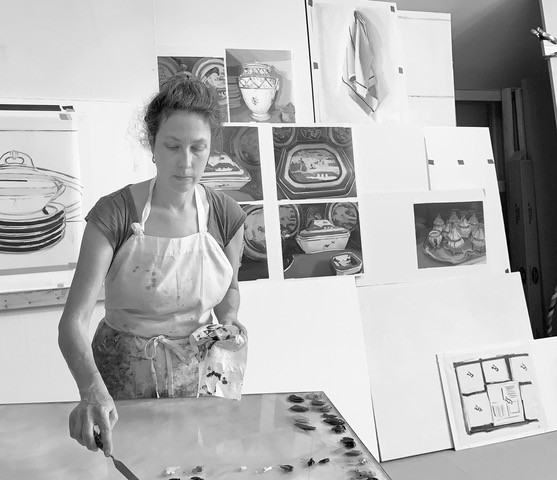 A Conversation with Carrie Mae Smith

Absent yet Present: A Painterly Dialogue with the Berman Museum’s Pennsylvania German Collection is now on view in the Berman’s Upper Gallery through May 30.
February 08, 2022

Based in central New York, Carrie Mae Smith experiences the past every day in the historic house where she and her husband live. She talked to us about how that sense of eras past inspired the exhibition Absent yet Present: A Painterly Dialogue with the Berman Museum’s Pennsylvania German Collection, now on view in the Berman’s Upper Gallery through May 30.

Smith had long been interested in Pennsylvania German folk-art—specifically redware, barn architecture and the painted designs of Hex signs. While a student at the Pennsylvania Academy of Fine Arts in Philadelphia, she was awarded The Louis & Charles X. Carlson Landscape Painting Residency Prize that granted a six-week artist residency in Lancaster County. Painting the Pennsylvania countryside and vernacular architecture was a pivotal experience for her. When given the opportunity to create work in response to the Berman’s Pennsylvania German collection, she was excited to explore the comprehensive collection of historic artifacts and revisit the rich cultural context.

On her visits to the Berman she donned white gloves and took hundreds of photographs of utilitarian tools, redware plates, saltware crockery, butter molds, quilts and furniture. Of particular interest were the many handheld tools that were used in the past, but have little relevance today, like the betty lamp, nutmeg grinder and corn-husking peg. Smith painted the objects that were the most mysterious and sparked her curiosity.

Her deliberate use of neutral colors allows the objects to be portrayed with a fine-tuned sensitivity. The paintings consider how cultural objects are preserved or commemorated, the tremendous effort the museum takes to preserve cultural objects, tagging each item with an accession number, and carefully storing them. “Painting the objects is another measure of preservation— giving the objects importance— it is a way of memorializing them,” she said.

“Through painting these artifacts, I hope they inspire curiosity in the viewers to uncover connections not only to the Museum’s collection but to the culture who used them.”

Tell us about the current exhibition at the Berman Museum.

The title “Absent yet Present” refers to the objects themselves that are often hidden (out of sight) in the archives of the museum. The objects are a recorded history of the community/ people that used them. The paintings re-awaken the objects but speak more about their memory and the stories they convey than their actual use or purpose. Exhibiting paintings of the objects rather than the actual objects is like presenting a memory, trace, or ghost of the objects; signifying a remnant of a time that is no longer accessible, no longer visible, yet remains in our presence.

Although I did not dramatically alter the scale of the objects in the paintings, most of them are painted larger than their actual size, which is similar to how memory operates. Our memories of scale depend on the time period of our memory, when we were young, we remember things to be larger than when we experience them as adults. Painting the objects larger than they are, contributes to this idea of the objects as memories.

What inspired you to create work in response to the museum’s Pennsylvania German collection?

I have been working in response to museum collections for around a decade now, sometimes through sculpture and more recently through painting. This project was initiated by an invitation from Deborah Barkun, the Creative Director of the museum. I enthusiastically accepted because of my long-time interest in Pennsylvania German folk art, and the opportunity to learn more about the Pennsylvania German culture through the Berman’s collection. The paintings were inspired by my continued interest in utilitarian forms— and uncovering the histories of utilitarian objects that are largely overlooked or forgotten. I find it remarkable that there are so many utilitarian hand tools and everyday objects being preserved in the Berman’s collection. These types of objects often wear out or are lost or are not deemed important enough for a museum collection or are rarely exhibited.

How can someone viewing the exhibition relate to historical objects from the Pennsylvania German collection and apply that to contemporary life?

Every object in the collection has some sort of connection to livelihood; the objects reveal a culture without technology. We can see the beginning of industrialization or manufacturing in only some of these objects. (Even roof tiles were made by hand by local potters).

This may be a challenge to the contemporary viewer and our ability to engage with simple handmade tools but is also an opportunity to reflect on our own lives and our dependence on industrialization and technology.

I am not sure how viewers will relate to these paintings of historical objects. Many of them are so foreign to us, as we live in an industrialized world. Very few of us grow up learning to use hand tools (other than video game controllers or a computer mouse). However, my hope is that the paintings captivate the viewer to ask questions about the objects and draw connections and realizations.

How has your background as a chef, cabinet maker and antiques dealer given you a unique perspective into this work?

My curiosity about food and foodways, craftsmanship and history all underpin my endeavors, in and outside of the studio. For this project, my interest in historical utilitarian objects and activities gravitated to the spotlight once again. Studying the arcane tools in the Berman’s Pennsylvania German collection really sustained my attention, I had never encountered many of them before. These objects reveal stories about their past lives and the broader historical context from which they originate. They contain the markings of the human hand and human use. Learning how or speculating how they were used gives me insight into the daily lives of the people who used them.

Describe the inspiration for a particular piece of your choosing in this exhibit.

As I painted several redware plates in the collection, also known as “poi-schissel” (or pie plates) I began to read about them and discovered that the pie-plate design had been created by Pennsylvania German potters without rims so that the pies baked in them could slide out easily.

In my research, I also discovered that fruits like peaches had not grown easily in Germany, whereas they grew in abundance in the summer heat of Pennsylvania—so abundant that they were fed to hogs! The prudent Pennsylvania Germans consumed peaches as much as they could, baking pies morning, noon and night. This led me to paint an image of peaches growing on a tree. I hung the works facing one another so that the paintings could have a conversation and viewers may draw this connection visually between the plates and the image of fruit.