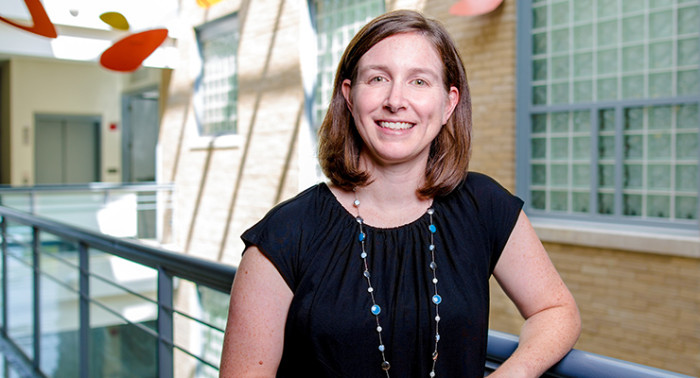 Nature uses enzymes called metallohydrolases to break down biological molecules such as proteins and DNA. Breaking apart these molecules by the addition of water is an essential biochemical reaction that governs cellular processes. Several rare genetic diseases come from hydrolase malfunctions, making them important to understand.

Ursinus College Associate Professor of Chemistry Amanda Reig is working closely with Kate Buettner, an assistant professor of chemistry at Gettysburg College, to look at metal ions that are either common (like zinc and manganese) or underutilized in nature (such as titanium and vanadium) and can be used in the breakdown. Their work is being funded by a National Institutes of Health Research Enhancement Award (NIH-AREA) for $382,063 over three years. The amount allocated for work at Ursinus is $190,035.

“This work takes what my lab has previously learned about iron-based enzymes and extends it to see what other metals we can use and how we improve the activity,” Reig said. “In addition to learning more at a fundamental level about how we can construct a protein and control the reactivity, we are also building a foundation for scientists who are trying to create enzymes that do specific reactions that could be useful from a medical standpoint.”

The research collaboration between the two colleges has been a few years in the making. It grew out of a meeting between an Ursinus alumna and one of Reig’s advisees, Jenna Pellegrino ’17, and Buettner, who at the time was a postdoctoral fellow at Fox Chase Cancer Center.

“Kate had always been interested in this idea of trying to design artificial enzymes using metals that you don’t see that often in biology—like titanium and vanadium,” Reig said. “When Kate started at Gettysburg, it was the beginning of our collaboration. We’ve provided her with protein constructs, and she has provided the expertise on how to handle the titanium and vanadium metals in aqueous solutions.”

Reig said sharing information, expertise, and resources between two colleges has made the research fruitful and so far, it has resulted in two published papers.

“We have complementary skill sets and we’re pushing the project in directions it would not have gone if either one of us had tried to do things on our own,” Reig said.

The research also enlists the help of students at both colleges, and there is a plan in place for students to work together at each institution over the summer months to continue the work.