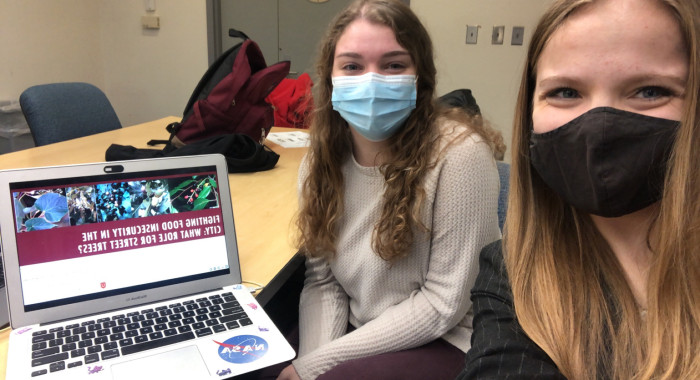 Kristen and Tori after their virtual presentation at the AAG. 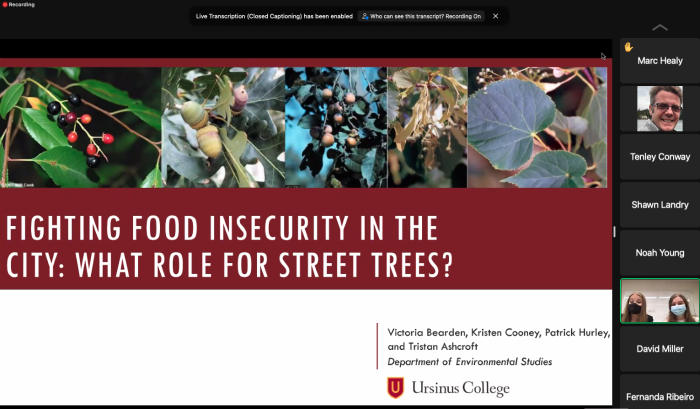 ENV majors Kristen Cooney and Tori Bearden presented on their research examining urban forests in Baltimore, MD and New York, NY at the recent annual meetings of the American Association of Geographers.
by Patrick Hurley March 16, 2022

Environmental Studies majors Tori Bearden and Kristen Cooney jointly presented on their honor’s theses at the Annual Meetings of the American Association of Geographers. Their talk, entitled “Fighting Food Insecurity in the City: What Role for Street Trees” was just one of nearly 20 presentations across five separate sessions devoted to a focus on “Trees in the City” from diverse scholars at this conference, with presenters ranging from U.S. Forest Service research scientists and other academic scholars to urban forest practitioners. The AAG’s Annual Meetings draws 1000s of scholars from across the globe. Originally planned as an in-person meeting in New York City, the conference was moved to a virtual format in response to the situation with the Omicron variant of the COVID-19 virus.

Tori and Kristen’s presentation draws on their separate thesis, which each investigates a different East Coast City but that both rely on the use of ESRI’s ArcMap to spatially analyze the distribution of street trees according to the food items they produce in relation to food insecure areas. While Tori’s research examines Healthy Food Priority Areas and street trees in Baltimore, MD, Kristen’s research examines New York City’s street trees within the city’s so-called Fresh Zones. Both projects were first developed as Summer Fellows projects in 2021 under the mentorship of Dr. Hurley (urban forest focus) and Dr. Ashcroft (GIS spatial analysis).

Both students will defend their final theses later during the Spring 2022 Semester.

Ms. Bearden is also minoring in food studies and Ms. Cooney is double-majoring in Art. Both students are part of the Urban Food Forest Guardians, working to ensure the success of outreach efforts of this new departmental initiative.