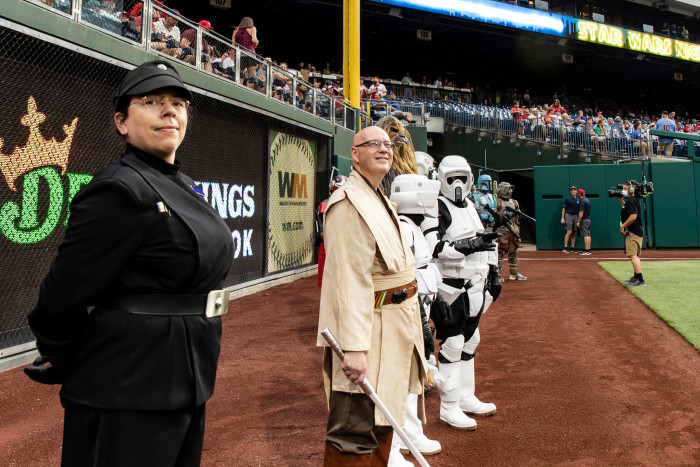 Leslie New’s early fascination with Star Wars has accompanied her her whole life, from struggling in early math classes to completing her Ph.D. on birds of prey in Scotland. Today, she serves in the 501st Legion, a Star Wars cosplay charity group that hosts events like children’s hospital events and charity fundraisers. She has assembled two fantastic costumes so far. While teaching math and statistics at Ursinus College, New is working on her most ambitious uniform yet.
by Tommy Armstrong ’20 March 22, 2022

Leslie New was a toddler when the babysitter canceled on the night that New’s older sister was heading to the movies with their parents. That’s how 2-year-old New wound up standing on a movie theater chair cheering and clapping for the heroes of Return of the Jedi. “My sister, upon seeing Jabba the Hutt, began crying and ran out of the theater, and I refused to leave [in] the only way a 2-year-old could,” said New. Her parents took turns checking on her sister, who had been adopted by the teenage cashiers at the concession stand. At the end of the night, little Leslie would finally exit the theater, if only answering to the name, “Luke Skywalker.”

New’s imagination flourished. An old VHS tape shot a couple days after her younger brother was born shows New and her sister holding him in a big rocking chair. New introduces herself as Skywalker and her baby brother as Han Solo.

“I’ve basically been into Star Wars for my entire life,” said New.

Today, the associate professor teaches statistics using Star Wars. For instance, she uses a public data set of Star Wars characters and creatures to show the various qualities you can use to assess wildlife populations, a specialty of New’s. Before teaching, she worked with renewable energy companies to reduce animal collisions with wind turbines.

“Wind energy is a wonderful thing,” said New, “but like most things, there’s no such thing as free lunch.” She investigated the environmental hazard posed by turbines, structures with which birds and bats aren’t evolved enough to handle.

“Turbines, in particular, are really deceptive on the eye. If you’ve ever seen one, it looks like they’re spinning really slowly,” said New. “They’re actually going over 200 miles an hour at the tip.” Birds of prey, New found, were the most common victims. Engaged in hunting, the birds would mistake the turbines for stationary objects like trees and collide with the spinning blades. Her statistical research and solutions reduced the rate of animal deaths, including those of Golden Eagles, an animal legally protected by the Golden Eagle Protection Act.

“I never thought I’d be using math to save animals,” says New.

In elementary school, New struggled in remedial math, catching up in the “math truck,” while her classmates were in gym class. After college, she swore off research and worked with birds of prey at the Philadelphia Zoo. There, she developed an educational program on why math matters if you want to study biology and animals. She realized that to accomplish her goals, she would need more schooling.

Unbeknownst to 23-year-old Leslie, that drive for knowledge would take her to Scotland. She earned a Ph.D. at the University of St. Andrews, writing her dissertation on the interactions between indigenous birds of prey, and eventually becoming a postdoctoral fellow.

While teaching statistics at Washington State University, she reunited with an old love in a new way. She joined an international Star Wars cosplay charity group called the 501st Legion. In Portland, Oregon, New became a member of the organization’s “Cloud City Garrison.”

“I first started out by helping them at events, but not in costume,” New said. “I’d be making sure the Stormtroopers don’t trip, and helping families take photos of themselves with the Star Wars characters.” The Lucas Films-approved organization would set up shop at conventions and accept donations to the Make a Wish Foundation, or children’s hospitals. New’s favorite experiences were visits to children’s hospitals, where she and her comrades would make the kids laugh with hundreds of “bad Star Wars jokes.”

Meanwhile, New helped facilitate events like the annual Halloween party sponsored by the Oregon Autism Society, or the Buddy Walk for Down Syndrome. “There are all sorts of different charities often changing it up year to year.” The one thing that is constant is the group’s dedication to charity and Star Wars swag. In 2018, New began creating her own.

Today, she has two costumes. One is the Imperial Officer. “Those are the people on the Deathstar who wear black uniforms and look at Chewbacca and go, ‘Where are you taking this thing?’ and then get killed by a Wookie,” said New. Her second costume is the Imperial Guard, the Emperor’s personal security. In Return of the Jedi, you can spot two of them for just a moment when Luke and Vader come into the Death Star. In addition to these two, New is especially excited for a much more ambitious costume she has in the works.

First, New has to sand, prime, and attach roughly 200 different pieces of fiberglass armor, all by hand. “It’s a lot of spraying things, sanding it, seeing that there’s still imperfections, spraying it again, sanding it…”

For New, the work is worth it. “It’s just a lot of fun to be making the kids so happy. Especially with the smaller kids who believe that you’re the character.” You can imagine how 2-year-old New would react to meeting Darth Vader. That’s the kind of experience she hopes to give in her hand-crafted Star Wars costumes.

Cooking and baking for family and friends. I love spending time in the kitchen, and it is even better when the results can be shared.

I think it is that I wasn’t always the best student, and certainly not in math, but yet I ended up with a Ph.D. and teaching statistics. Too often we get the idea that we are either good at something or we are not, and my story emphasizes the room we all have for growth and change.

Being a Bear for Life means valuing and giving back to the communities of which we are a part. It means spending our lives being open to new ideas and new thoughts, and understanding the place from which we came and how it has shaped us.