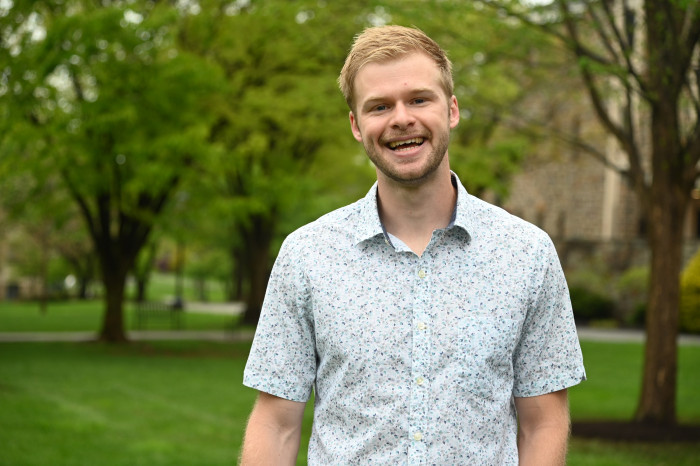 Erich Keyser ’16, who this academic year returned to Ursinus as an adjunct instructor in the Common Intellectual Experience, founded COALESCE Community, an online literary magazine focused on sharing stories to evoke compassion and understanding.
by Ed Moorhouse May 05, 2022

Everyone has a story. To truly get to know other people—and where they come from and what motivates them—you must really take a few minutes and listen. In a world that seems more divisive than ever, listening to others talk about their experiences and their perspectives is the first step in coming closer together.

Erich Keyser ’16 wanted to create a forum for those stories.

“As I’ve met more and more people from diverse backgrounds and diverse lived experiences, I’ve realized how my personal story has shaped my perspective of the world and how limited it was—and how much more I had to learn,” Keyser said.

He created COALESCE Community, a literary magazine where creators can publish creative nonfiction, poetry, and photo essays that highlight personal and transformative stories. The inaugural issue was published on March 20.

Born in part from a communal and creative void left during the COVID-19 pandemic, Keyser said COALESCE became a way to “focus on stories—people’s human stories—because if you really think about it, it’s the best way to really get to know someone in a personal way and in a vulnerable way, and in a way that’s more intimate than just asking, ‘Hey, how’s it going?’”

Keyser was a biology and religious studies double major at Ursinus who was working as an environmental consultant in Canada when he had the idea for COALESCE. However, COALESCE was not something that just came to fruition overnight. It was an idea that “incubated for nearly two years, and just needed the right environment, conditions, and support to come to life and thrive,” he said.

“I had to face a lot of fear of failure, and fear of uncertainty, which was personally quite hard for me to do, and I don’t want to give the wrong impression to people who read this that this was a piece of cake—an Instagram version of reality where all the challenges and stumbling blocks along the way are withheld.”

Keyser explained that COALESCE was the culmination of a lot of support from others who generously offered their listening ears and feedback along the way of this two-year journey. He developed the idea with his partner, writer and artist Kate Sowinski. Jill Benedict, who is a writer and reviewer for another literary magazine, and Matt Barrett, who teaches English at Gettysburg College and is also a published writer, serve as reviewers and were helpful in launching COALESCE.

Acknowledging these individuals, as Keyser points out, stresses the “importance of community and that our lives, experiences, and successes do not exist in a vacuum.”

That is something that truly reflects the essence of the literary magazine.

This past academic year, Keyser served as an adjunct instructor in CIE, the cornerstone course that all Ursinus students must take in their first year. CIE had a tremendous impact on Keyser while he was a student, and its lessons still resonate with him today.

“I think I always had a knack for questioning things. But CIE and Rev. Rice really challenged my perspective,” he said of his instructor, the late Rev. Charles Rice. “It got me to think about how we should we live our lives and a lot of that is by sharing our own lived experience. It’s connected to so many aspects of the world—to our environment, our spiritual beliefs, and our political, social, and economic systems. I was really challenged in a wonderful way.”

COALESCE received more than 60 submissions for its inaugural issue and published 15 of them. Their Summer collection will be published on June 21 and future editions will be published quarterly. While COALESCE is starting off beautifully, Keyser is hoping to grow the project into something more. He envisions a future of relationships with community organizations, educational institutions, a space for collaboration, creativity, and learning.

“The future vision is very broad. I would love for it to become a physical space where people could come and work on projects together, where we could partner with schools, hold community lectures and talks, workshops, serve as a home for student art galleries, be a meeting place for community organizations—just a place that really fosters creativity and community connection,” he said.