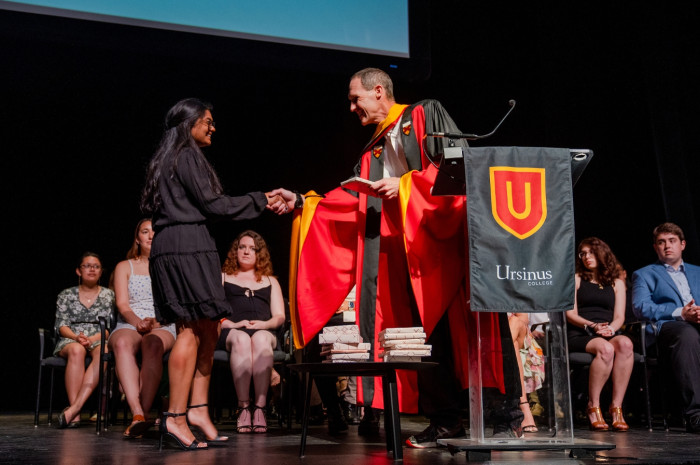 In keeping with a tradition that was established when Phi Beta Kappa first formed on campus in 1992, the Tau of Pennsylvania Chapter inducted a new class of members ahead of the annual commencement ceremony.
by Jennifer Meininger Wolfe May 13, 2022

Ursinus is one of only 10 percent of colleges and universities to nationally host a chapter. This year, 45 seniors and four juniors were inducted into the prestigious honor society. Two members of the class of 2022 were inducted last year as juniors. Twenty sophomores with a 4.0 grade point average (GPA) were awarded the John M. Wickersham Book Prize.

“The students inducted this year come from all departments and programs, and they embody Phi Beta Kappa’s commitment to love of learning and liberal education,” said Mark Ellison, the David Laucks Hain professor of chemistry and president of Ursinus’s chapter of Phi Beta Kappa. “In spite of the immense challenges they faced due to the pandemic, they achieved at the highest levels. As the chapter celebrates the 30th anniversary of our founding, I cannot think of a better group of excellent students to set the example for the next 30 years and beyond.”

To be eligible for consideration, a GPA of 3.50 for seniors and 3.75 for juniors is required, as well as completion of a full year of intermediate level language in college. Additional qualities and factors taken into consideration include nominees’ intellectual curiosity, character, breadth of academic program, and service to the community.

Phi Beta Kappa was founded in 1776 at the College of William and Mary in Williamsburg, Va., to form a student society devoted to liberal education and intellectual fellowship. More than 800 Ursinus alumni have joined Phi Beta Kappa since its inception at Urisnus.

(Jenna Menapace and Jess Wun are members of the Class of 2022 who were inducted as juniors.)