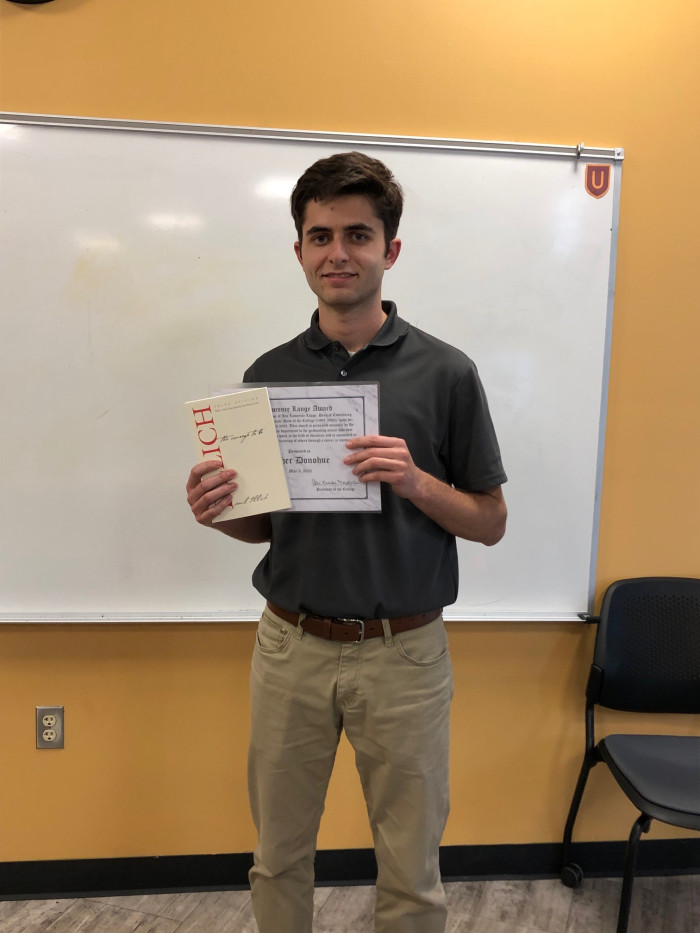 Asher Donohue is the recipient of the Lawrence Lange Award, presented annually by the faculty of the education department to the graduating senior who best exemplifies outstanding work in the field of education and is committed to nurturing the lifelong learning of others through a career in teaching.

Dr. Seamus Mulryan, who supervised Mr. Donohue’s independent study on the educational relationship between the individual and society said, “It was every clear that Asher had a unique ability to comprehend difficult theoretical texts when I had him as a freshman in one of my classes. After guiding him through an independent study that included reading Charles Taylor’s Sources of the Self and Alasdair Macintyre’s After Virtue, it was clear that he was going to bring a strong, reflective intellect to his educational work, whether that was going to be in public schools or through pastoring.”

Asher also met an unusual and challenging circumstance while student teaching: two weeks before the semester ended, Asher was asked to lead the class until winter break without his mentor teacher. The district was so impressed with him that they hired him full-time for the remainder of the year.

His award from the department included a copy of Paul Tillich’s The Courage to Be, because, Dr. Mulryan said, “We are entering a new age of anxiety, which means Asher will be facing anxiety in many of those he works with, and because Tillich was an American theologian and philosopher concerned with anxiety in this work, The Courage to Be brings together the many facets of Donohue’s interests and concerns and might be able to support him as he helps others lead a good and meaningful life.”