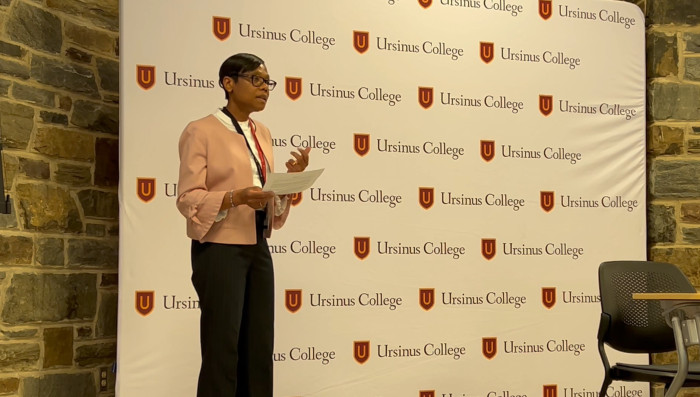 Heather Lobban-Viravong presents a lightning talk on the addition of disability services to the division of inclusion and community engagement.
HomepageNewsCampus Fair and Lightning Talks Raise Awareness for Hidden Disabilities

Supported by an Inclusive Community Grant, the Invisibility to VisAbility Fair was an event initiated by UC Possibilities, a new student-run group under disability services. The fair, much like the organization itself, aimed to raise awareness and promote acceptance of hidden disabilities, both mental and physical.
by Jennifer Meininger Wolfe May 12, 2022

Invisible disabilities refer to diagnoses that are not apparent or “seen” physically and can include impacts such as debilitating pain, fatigue, dizziness, cognitive dysfunctions, brain injuries, learning differences, and mental health diagnoses, as well as hearing and vision impairments.

“Many of us struggle with an invisible disability,” said club president Sophie Louis ’24, who hoped the fair would empower students to “talk about their invisibility and break the stigma in order to make the campus more aware and more accessible.”

The event featured other student groups as well, including:

The Hidden Opponent: A campus chapter of this national nonprofit focuses on mental health in athletics, but is open to the entire Ursinus community, regardless of athletic status.

UCrew (Ursinus Cultivating Respect, Education and Wellness): Supported by a Pennsylvania state grant, this group of seven nationally certified peer educators aim to raise awareness about substances and sobriety, and educate fellow students about harm reduction to help them avoid problems related to alcohol or drug use.

A “Speak Your Truth Booth” allowed participants to anonymously share their experiences with hidden disabilities. The division of inclusion and community engagement was also a sponsor of the event, which featured offices such as counseling, prevention and advocacy, and life coaching. Community partners included Keller Williams Realty Group.

The fair was followed by a series of lightning talks in the Bears’ Den. Vice President for Inclusion and Community Engagement Heather Lobban-Viravong, who leads a newly expanded division that aims to foster an inclusive environment by strengthening engagement among members of our campus and our regional neighbors, discussed the addition of disability services to her team in order to better serve the whole student.

“Our society tends to put people in boxes, so we see an individual who presents with a disability in a fixed way rather than as a complex human being with intersecting identities,” said Lobban-Viravong. “But we are all made up of different identities and can’t be defined by just one.”

Assistant Professor of Psychology Mora Reinka, whose research focuses on the stress and coping processes related to stigmas, spoke on the topic of concealable stigma and the health consequences that can result from the disclosure—or even anticipated disclosure—of personal information. People worry about what will happen if they disclose stigma-related information, and that worry can impact their health. A supportive reaction, on the other hand, can improve the person’s well-being.

Visiting Instructor of Psychology Brenda Lederach spoke about the myths, misconceptions, and misrepresentations of mental health issues. She offered a quick overview of how the history of mental health issues have been treated over time, from the Middle Ages to modern-day films and TV series. She encouraged attendees to avoid labeling: “Don’t say someone is schizophrenic. Say someone has schizophrenia—not that they are the illness,” said Lederach. “Social stigma becomes self-stigma.”