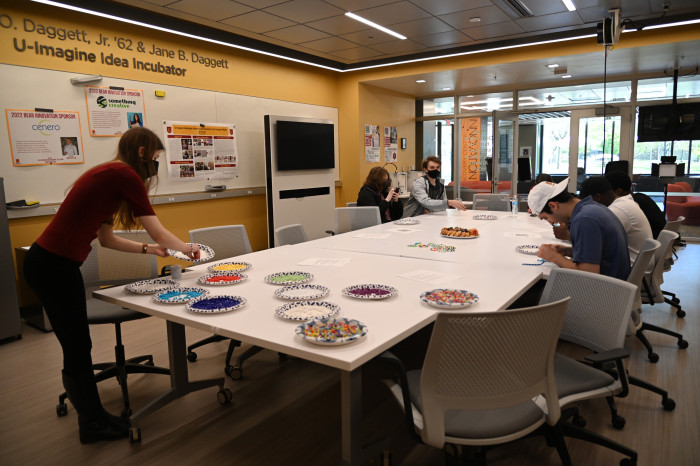 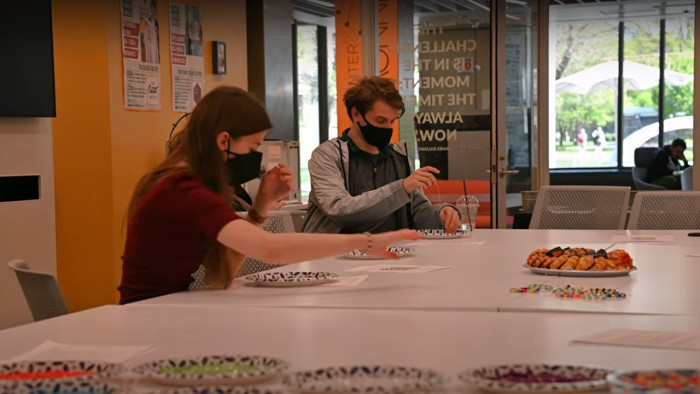 Christine Heren ’22 is joined by fellow students at a bracelet-making workshop.
HomepageNewsCrafter Helps Ukraine One Bracelet at a Time

Driven by her Ukrainian heritage, Christine Heren ’22 has been taking small steps to make a big impact in a country that has suffered eight years of conflict with Russia.
by Jennifer Meininger Wolfe May 12, 2022

With Ukrainian heritage on both sides of her family (her grandparents all immigrated to the United States during World War II), Heren was highly involved in Philadelphia’s Ukrainian-American community while growing up in Bucks County, Pa. She attended Ukrainian school every Saturday and participated in a debutante-like ball within the Ukrainian community.

When Russia invaded Ukraine in February, her close-knit community was rocked. “I don’t have family in Ukraine, but being part of the Ukrainian community means that I know people who do,” said Heren. “Everyone is constantly on pins and like needles and there’s a constant sense of dread in some ways. It’s really horrific … a full-on invasion was something that no one really foresaw.”

A jewelry-maker for as long as she can remember, the biochemistry and molecular biology major started crafting bracelets to sell to raise money for the Ukrainian Federation of America, a nonprofit in Jenkintown, Pa. “They’re buying medical supplies, literally by the pallet, which are loaded on a plane and sent to Poland” for distribution into Ukraine, said Heren.

She’s been fundraising for the organization since her activism began in high school. Following Russia’s annexation of Crimea and invasion of eastern Ukrainian regions such as Donetsk and Luhansk in 2014, Heren wanted to help the children of soldiers suffering from post-traumatic stress disorder. She sold Ukrainian Christmas ornaments to help fund a therapy room in a clinic in western Ukraine. It’s named in her honor: Kutok Khrysti (Christine’s Corner).

“When you see a war going on somewhere, you’re limited in what you can do,” said Heren. “I felt I was in a unique position to be able to help out because I do have the ability to make jewelry … and I had connections to the Ukrainian Federation of America.”

Through fundraisers on campus and elsewhere, Heren has raised more than $2,200. Members of the campus community have supported the cause not only by purchasing the bracelets, but also by helping to make them. The U-Imagine Center for Integrative and Entrepreneurial Studies has also been instrumental in helping Heren refine her fundraising.

“The beads were a private investment; I bought those myself. In working with the U-Imagine Center, I’m learning how to make the fundraiser more sustainable,” said Heren, who credits Entrepreneur-in-Residence Maureen Cumpstone with making her realize she was underselling her product.

Heren said one of the most important things about the project is that she took something she was passionate about—jewelry-making—and found ways to use those skills to help. She hopes to inspire others to do the same, even if it’s a small-scale change.

“There are a lot of people who are obviously really upset about everything going on in Ukraine. So it feels good to be able to help people connect in whatever way to combating that issue, even if it’s something as small as buying a bracelet.”