Ursinus began a partnership with the Delaware Tribe of Indians and the Perkiomen Valley School District this year on the Welcome Home Project, which honored the history, culture, and legacy of the Lenape people, who for thousands of years inhabited parts of Delaware, New Jersey, New York, and Pennsylvania—including the Collegeville area. 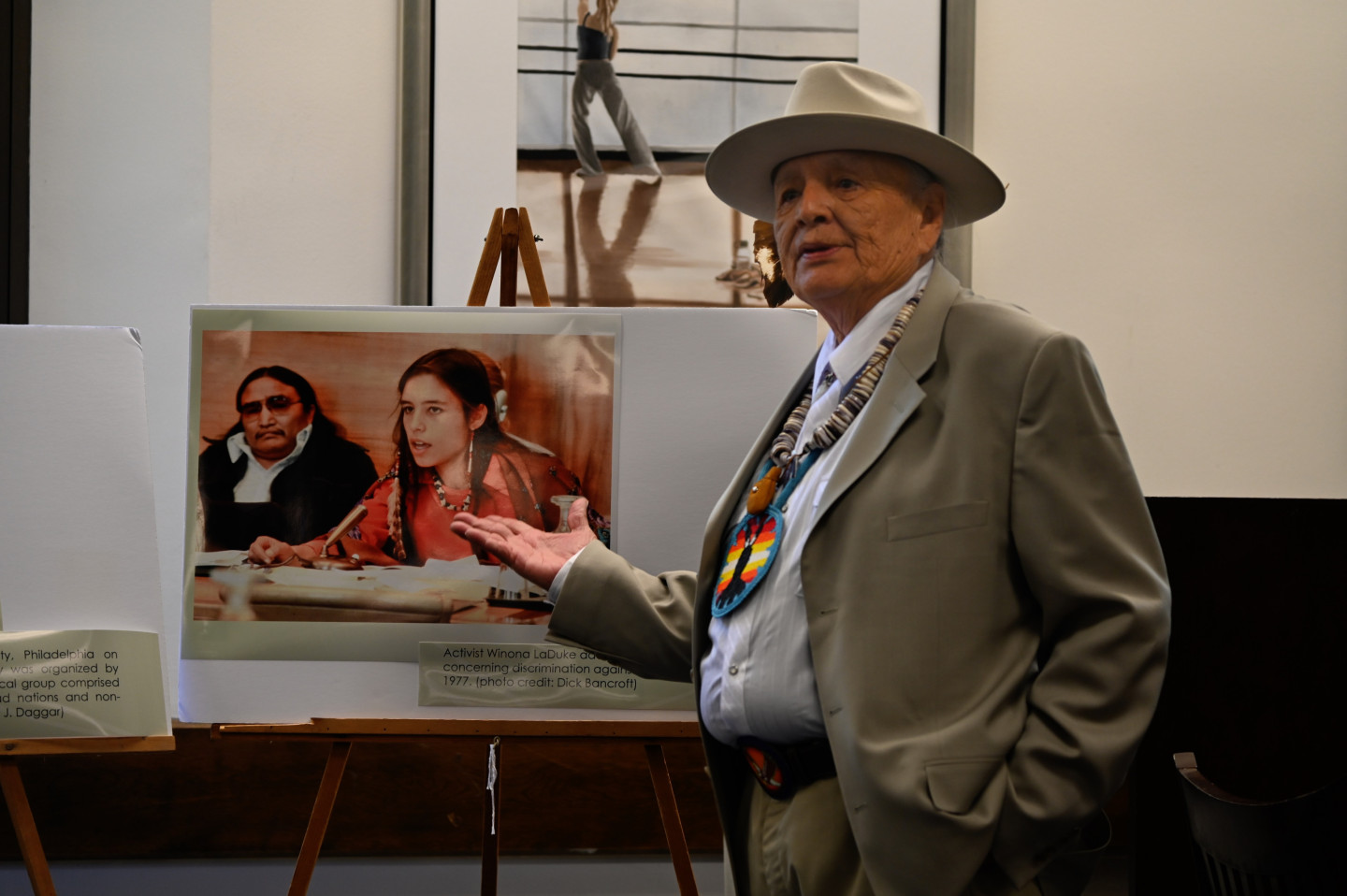 Ursinus College has occupied its Pennsylvania campus for 153 years, but that same span of time is just a lone breath in the long life of this land, which its original inhabitants, the Lenape people, once occupied for approximately 10,000 years.

More than two and a half centuries ago, colonial powers began to remove the Lenape people forcibly and violently from their ancestral land. The Delaware Tribe of Indians, one of the five federally recognized Lenape tribes, lived here in what was once called Lenapehoking. The region spanned from the Delaware Bay to central New York where the Mohawk River still runs into the Hudson. Eventually, the Lenape people were forced west, while treaties were broken and discarded.

Over the past year, Ursinus—along with the Perkiomen Valley School District—has worked in partnership with the Delaware Tribe of Indians to honor their history, culture, and legacy while recognizing their longstanding connection to the land on which the college now sits. Delaware Tribe of Indians representatives—including Chief Brad KillsCrow, Assistant Chief Jeremy Johnson, and Elder John Thomas and his wife, Faye—interacted with the Ursinus community, learned of its food forest and sustainable land practices, and contributed materials for a Myrin Library exhibit.

“I could feel my ancestors. I could feel their spirits. As a little boy living in Oklahoma, I always, always heard about this place. Always heard about the Delaware Water Gap … The elders talked about these places, and how sacred this place is and how much it means to our people,” Chief KillsCrow said. “Now being able to live it, feel it, and be a part of it … we feel for the very first time like we actually belong somewhere.”

Since the collaboration began in summer 2021, tribal representatives visited Ursinus history and environmental studies courses, and the college community drafted the Land Acknowledgement Statement with the help of students in a political ecology course.

During a Welcome Home event in April, the partnership was strengthened when each party signed a Statement of Mutual Intentions, which commits the college, the school district, and the tribe to take meaningful actions that raises awareness about the Lenape people. Ursinus President Jill Leauber Marsteller ’78, P’18 said, “This statement is just a start; the college and the Delaware Tribe of Indians have expressed their intentions for a long-term relationship.”

“This is not a one-time thing,” said Assistant Chief Johnson upon signing the document. “We are excited to really work on these relationships we have started, and this is going to cement that work.”

The signing capped off an extensive three-day visit with the Lenape people, who participated in a reburial ceremony on April 11 at Pennsbury Manor in Bucks County. The reburial ceremony was made possible by the Native American Graves Protection and Repatriation Act of 1990, which states that “human remains, funerary objects, sacred objects, and objects of cultural patrimony” are property of tribal descendants, not of museums or other private or public entities.

The existence of this act means that all five Lenape tribes have since sought to rebury their disinterred. The gathering at Pennsbury was just one part of this story as Lenape representatives, many of whom were visiting their ancestral homeland for the very first time, reburied their ancestors’ remains during an especially poignant ceremony.

Back on the Ursinus campus, the Welcome Home event included a tour of John Thomas’s personal collection of documents—which he graciously loaned to the college—curated for a Myrin Library exhibit by college archivist Carolyn Weigel, Assistant Professor of History Lori Daggar, and Katie Sanfield ’23. The event also included a presentation of the college’s food forest, which draws inspiration from the Lenape people to grow food responsibly and sustainably.

“This is an incredibly exciting moment,” Daggar said. “We need to take action, we need to forge a partnership, and we need to show up for the Lenape people.”

“We can do our best as historians who have done the reading but having John [Thomas] here talking about the memories that these documents evoke for him is incredibly powerful. That’s why we do the liberal arts—to have meaning in the work that we do,” she said.

Vice President for Inclusion and Community Engagement Heather Lobban-Viravong foresees more opportunities for future engagement between the college and the Lenape people.

“We’ve come together to bring greater awareness to the Lenape people and their homeland; to build up our knowledge and awareness of the history and traditions and culture of the Lenape people; and to make sure that we are guided by their insights and their stories,” she said.

“I have an overwhelming feeling that we are being welcomed back,” KillsCrow said. “Our ancestors are saying, ‘You’re home. You’re home, Chief.’” 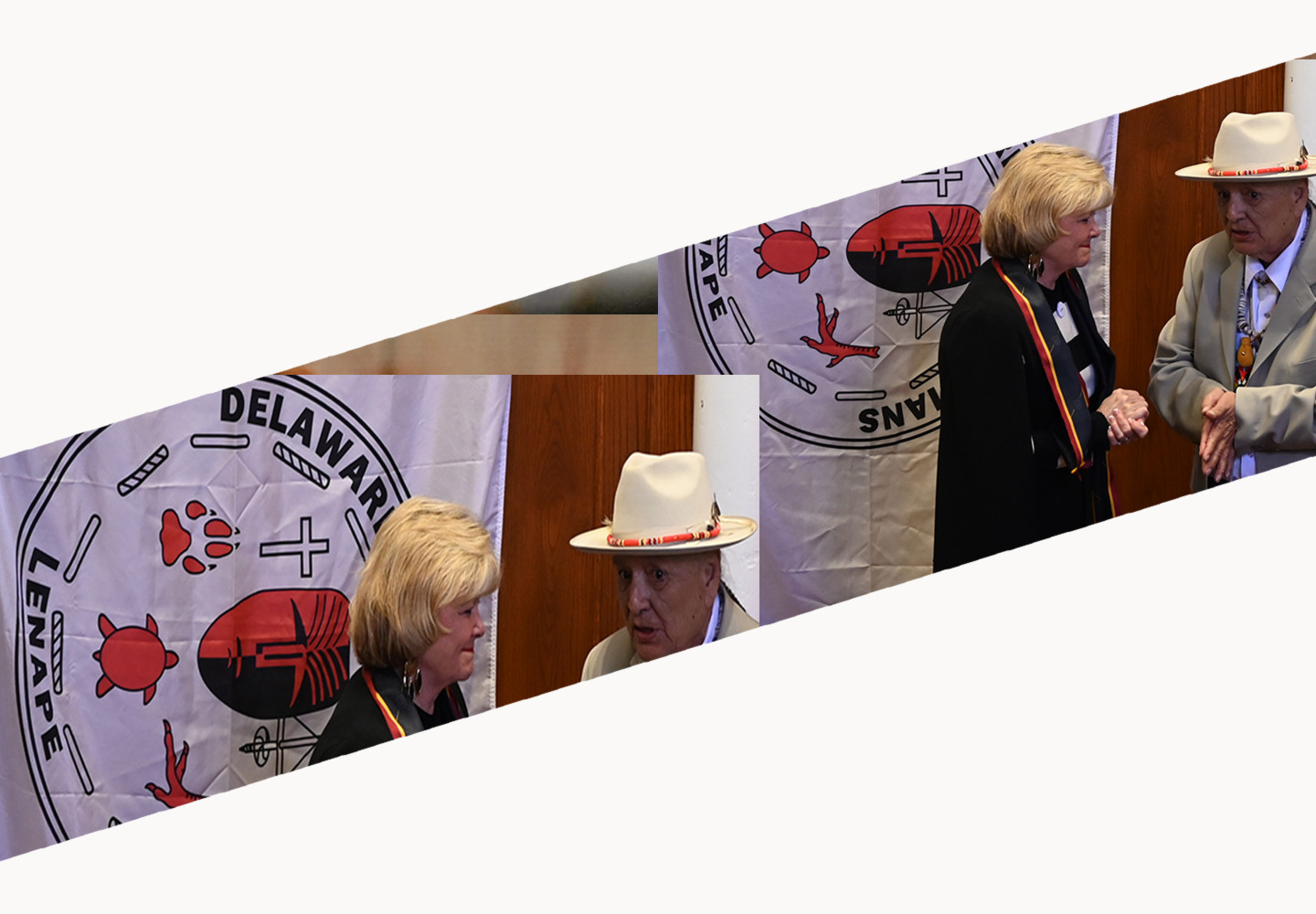