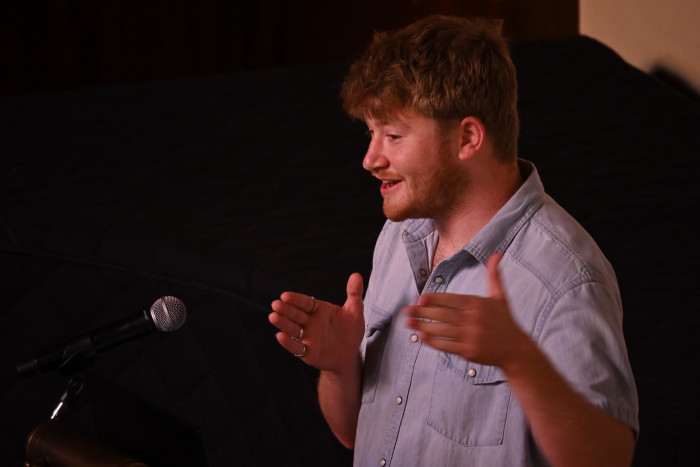 A Historical Analysis of Queer Depictions in Horror Films

I am interested in analyzing queer depictions in horror films. Specifically, I am looking at American horror films, and I am mostly interested in overt (rather than subtextual/implied) depictions of queer sexuality/gender identity. Since most of these depictions utilize queer characters as their source of horror, I am seeking to find common threads throughout decades of the horror genre and its display of a “non-normative” identity.

As an English major with a lot of interest in film, I have always been struck by the indirect history lessons that come with learning about texts. When it comes to an author’s intention, a work’s reception, and its lasting legacy, studying significant works can teach us so much about the culture, politics, and values of the time of publication. Tracking individual horror films and their depictions of queer identities has the potential to shed light on the history of LGBTQ rights in America, while also demonstrating the rationale for long-standing stereotypes used to oppress queer people. I decided to focus my research on the value queer depictions in horror (problematic or not) might pose for a queer viewer. Since most film studies presume horror films are made for a straight white adolescent male audience, I want to consider how queer viewers (like myself, a gay man who loves horror films) can still find a place in this genre.

The most significant learning of my research so far has come from Harry M. Benshoff’s Monsters in the Closet, which my adviser, Associate Professor of Media and Communication Studies Alice Leppert, describes as the “gay horror film bible.” The book breaks down the concept of the “queer monster,” which terrorizes some element of the heteronormative world in horror films and must therefore be eliminated. Recounting the history of the horror film genre from Classic Hollywood to the late ’90s, when the book was published, Benshoff describes the ways in which queer monsters have changed and remained constant throughout the history of film, using examples from countless films (including most of the films I am watching this summer). Benshoff, along with other scholars, frequently returns to an analysis of binaries—the “normal” vs. the queer—to construct horrific elements, which results in filmic practices like doubling. With my approach of considering queer viewership, the concept of camp in film is one subtopic I am focusing on. Through readings and film viewings, I have grown to appreciate just how ridiculous some of these horror films are, especially the ones from the ’80s.

Here’s a full list of the films I’m viewing:

It’s impossible not to have fun when watching movies, even as I take rigorous notes on every small detail. With most of my film viewings, I’ve been able to share the experience with other Summer Fellows, friends from off campus, or my family at home. It’s been cool listening to other people’s perspectives on the queer elements of these films, which it seems is something many people take for granted. When friends and family ask what my research project over the summer is, their response is often, “Are there a lot of horror movies with queer people?” It’s surprising people don’t reflect on iconic films like Psycho, Rocky Horror, and Silence of the Lambs with a strict scrutiny of their themes surrounding gender and sexuality. Those three in particular are some of my favorite films, so I am fascinated by studying their messaging. But beyond the most iconic, there’s such a rich history of frightening characters who break the heteronormative mold and it’s been such a joy to share those with people in my life. I held a public screening for Silence of the Lambs with all the Summer Fellows, which was well attended and yielded a great conversation after the movie about the portrayals of Buffalo Bill and Hannibal Lecter. My best friend and I watched Sleepaway Camp together and were both terrified of the twist ending, which troubled us deeply for its transphobic connotations. I watched Rocky Horror Picture Show with my family and was so excited for my youngest sibling, who is trans, to get to witness this queer cultural phenomenon. This project has been illuminating for the things I’ve learned about queer theory, but it’s also been a great bonding tool. Especially during Pride month, I’ve had so much fun watching these creepy, camp, sometimes problematic queer films with the people in my life and considering what messages they have to offer.