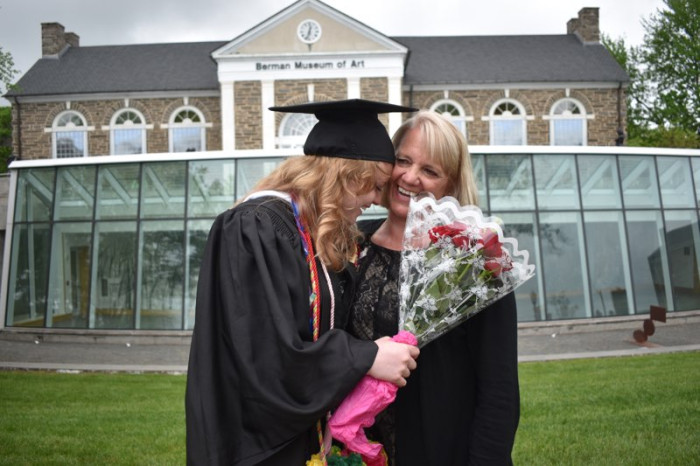 Surrealist artist and Donald E. Camp Award winner Kelsey Gavin ’22 spun her collection of paintings into a significant scholarship at her dream graduate school. This fall, she is pursuing her master’s degree at the Pennsylvania Academy of the Arts (PAFA), the alma mater of her lifelong inspiration, David Lynch.

Gavin’s love of art originated in her childhood. “My parents have always been incredibly creative, and incredibly supportive of my creativity.” When she struggled with a poor immunity as a toddler, her parents enrolled her in art therapy to work on her fine motor skills, like talking and moving her hands.

Growing up, Gavin’s frequent ailment kept her out of sports. “There became this sense of freedom and in making and creating.” What began as a means of rehabilitation became an all-around instructive skill. Making art became her favorite form of play and inquiry. “Being able to build an environment in my mind and then to translate that onto a page became really exciting, especially as like a little kid.”

Her earliest memory making art features six-year-old Gavin standing on the back of a toilet tank with a box of band aids, using them to replicate skin in a portrait on the bathroom wall. “I feel like most parents would be horrified,” said Gavin, “But my mom saw that, and she could see my creative proclivities as a young child. Both my parents fostered that.”

At the age of 13, Gavin discovered an artist who would become her inspiration and “creative soulmate.” She watched David Lynch’s surrealist Twin Peaks, a two-season mystery series drama from the early 1990s. She watched Lynch’s feature films, including Blue Velvet, Mulholland Drive, and Dune. “I wanted to consume as much as possible,” she said. “[He] was this person that just opened up art for me and I felt like I finally was getting an understanding of what it meant to be a contemporary artist like years before I was actually making moves to try to practice that in my own capacity.”

At 17, Gavin didn’t have a plan. She said, “Outside of graduating and going into college, I had no idea what I wanted to do.” She credits her mom for pushing her to pursue art. The two looked at local colleges, and after meeting the Ursinus art faculty during the annual Admitted Students Day, Gavin knew she was in the right place. “We deposited 10 minutes later.”

“I cannot speak more highly of the art professors. They are fantastic teachers and wonderful people,” said Gavin. “It was a place where I felt like I could nurture something.”

During her first year at Ursinus, Gavin experienced what she called her “discovery period.” She was learning new languages of art and declared herself a painter. She pulled on her artistic revelations from watching Lynch and created a portfolio of work with the same vibrance and esoteric love of fun. Her connections to her professors were so deep, she resolved to pay those lessons forward through a new creative mission: she wanted to teach art at the college level.

“I have so many great teachers in my life, I feel like who have shaped me into the person I am today,” said Gavin, whose mother is a teacher. “Grad school felt like the next right step.” 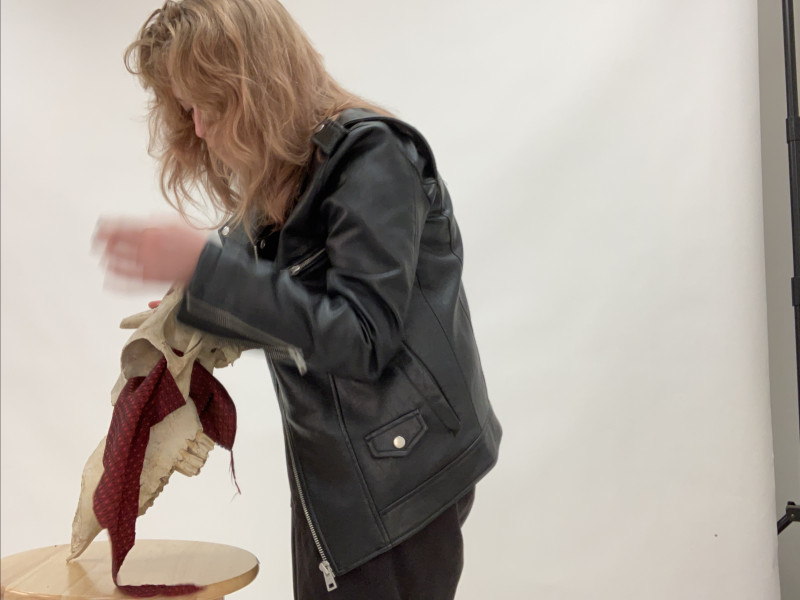 She sat down with her professor David Aipperspach, a Rhode Island School of Design MFA alumni who advised her that rejection is an inevitable part of the graduate school application process. It takes people years and many rounds of rejections before many of them receive any graduate school acceptances. Even if they are accepted, the costs of enrollment can be prohibitive. Gavin’s plan: give it a few years and see what happens. She cast a wide net, but her dream school was the Pennsylvania Academy of Arts (PAFA), the alma mater of David Lynch.

While her education endured distress with the blitzkrieg of coronavirus at the end of her sophomore career, Gavin applied to graduate schools across the country, all while producing more art. These compositions would soon win her the Berman Museum’s Donald E. Camp Award for risk-taking in art. In the meantime, Gavin awaited the onslaught of graduate school decision letters.

“I got several rejections, which was fine,” Gavin said, “In the art world, the one constant is there will be rejection. Most of the time.”

By March 2022, Gavin felt “almost defeated.” She reevaluated her future and considered opportunities for postgraduate employment. One Friday afternoon, she received her admissions determination from PAFA.

“I was like, ‘Well, this is probably another rejection,’” said Gavin. “‘And I don’t really want to look at this right now. So, I’ll look at it later.’”

She was sitting in her dorm room with her roommate, laughing off the anticipation when she opened her PAFA decision. “It took a minute to register because the word ‘accepted’ wasn’t clicking to me.” “This thing that felt so impossible before was now becoming possible because I’ve received this grant that is going to allow me to pursue what I love to do for two more years,” said Gavin. 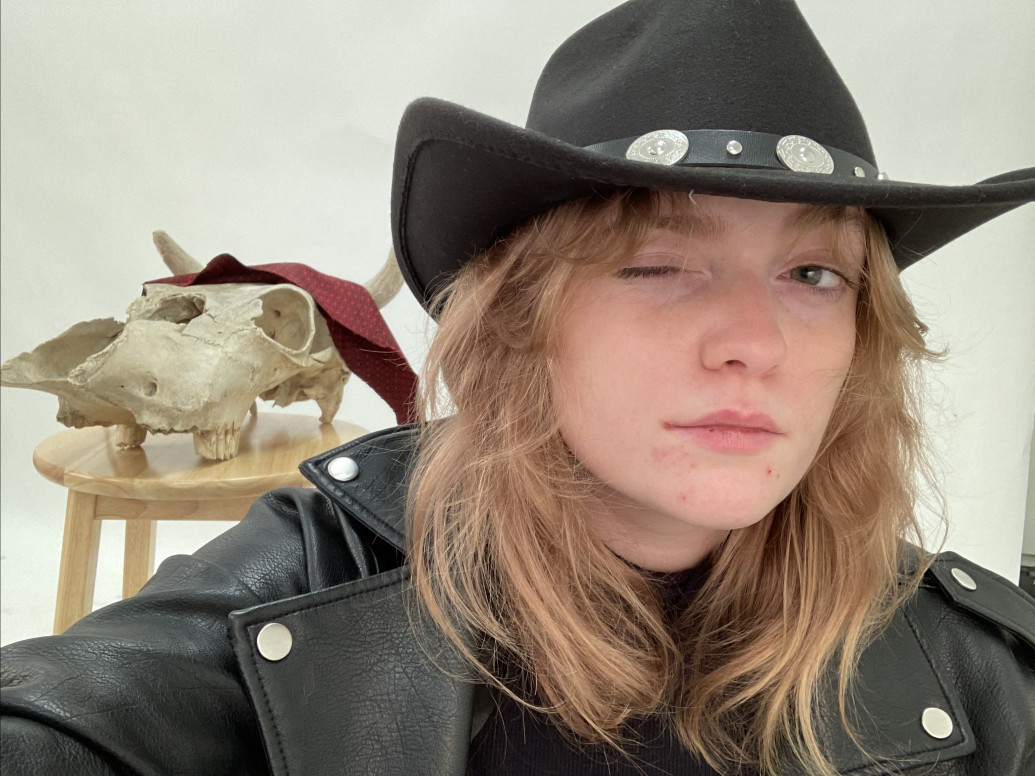 She looks forward to evolving her work while discovering herself as an instructor at the Philadelphia-based academy. She is thrilled to push the boundaries of her art in the same place her artistic role model spent some of his formative years. There, Gavin will seek out an area called, “The Eraserhood,” eponymized from Lynch’s breakout feature film, Eraserhead (1977) rumored to include Lynch’s old haunts as an undergrad.

Gavin hopes to pass on lessons from the classroom to future generations of artists. “I think one of the greatest things a teacher can do is develop both a professional and creative rapport with the student,” said Gavin. That support and recognition is instrumental in the development of students on their creative journey.

Artistically, Gavin hopes to use the next few years to discover her own voice. She wants to pivot from Lynch-inspired recreations to completely original compositions. “I’m really excited about more about myself as an artist because I feel like there’s a lot left to be explored.” No matter what direction the young artist takes as an artist and as a teacher, she will have at least two more years of intensive study and workshops to unleash her artistic potential.

The sense of community and support is the most unique part about my story. I think it’s rare to be so lucky to come across at least one person that is so genuinely invested in your future, let alone more than one. I was incredibly gifted with a wonderful support system of faculty and staff within the art department that helped nurture me into the artist I continue to grow into. I don’t think I’d be doing what I’m doing if it wasn’t for them.

To me, I really think it’s about remembering and cherishing where you came from. The UC Art Department raised me, and I will always hold a profound fondness and love for them in my heart. It was truly an experience I will never forget, and I think that kind of impact never, ever leaves you. 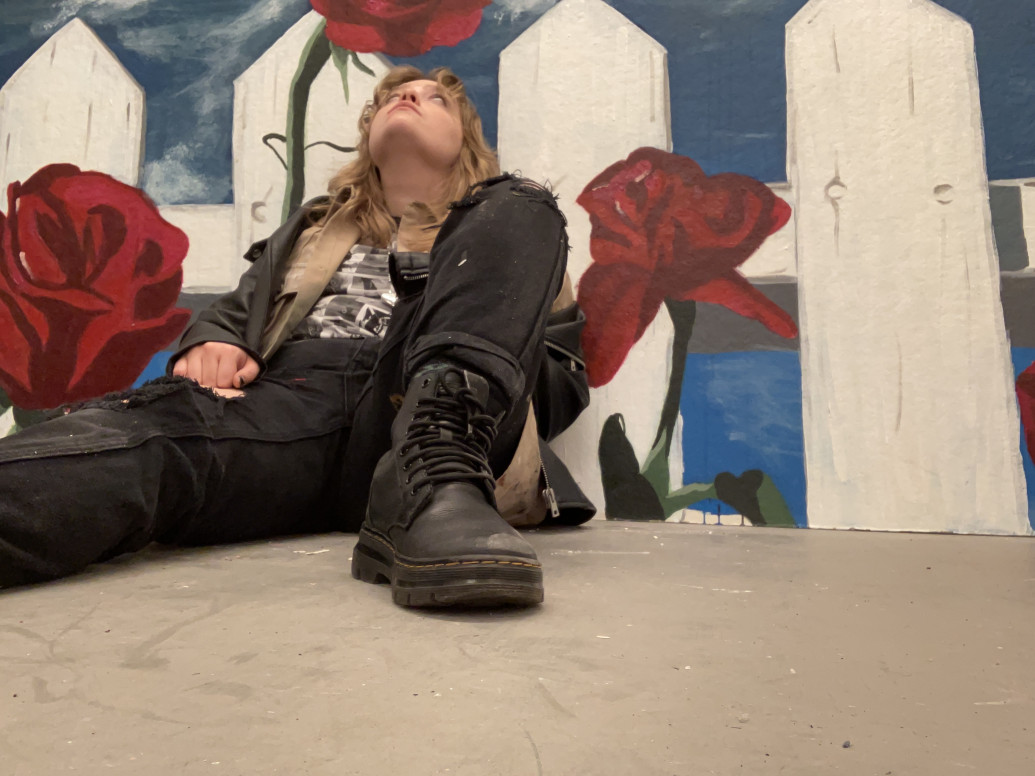