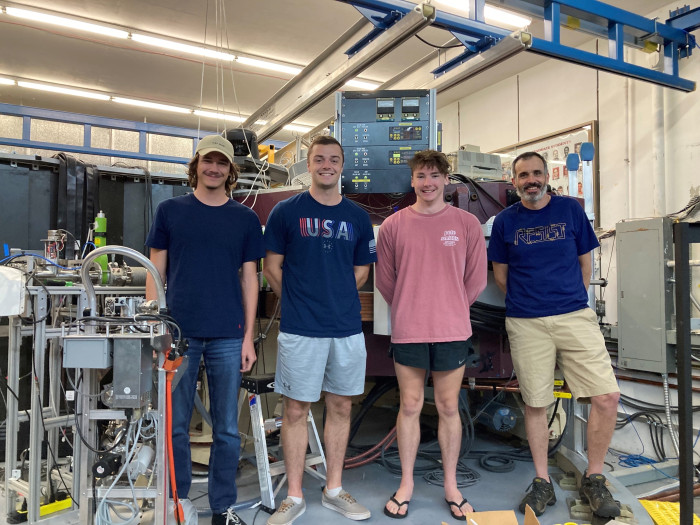 Ursinus students and Professor Lew Riley work with the Split-Pole Spectraph at the Fox Lab at Florida State University as part of the Fox Lab REU program in summer 2022. A new NSF grant will allow students in Riley’s lab to continue nuclear structure research at FSU and at Michigan State University.
HomepageNewsUrsinus Team Earns Funding to Build on Nuclear Structure Research

When is comes to nuclear physics, there are still plenty of mysteries to solve.

“The field is over 100 years old, but we’re in the early days in the sense that we haven’t fleshed out the whole picture,” said Ursinus College Professor of Physics Lew Riley, whose research interests over the past two decades have centered around nuclear structure.

A new grant from the National Science Foundation is helping Riley and his research team of students continue their work, which makes significant contributions to the understanding of the systematic evolution of single-particle and collective excitations through experimental work at the Facility for Rare Isotope Beams (FRIB) at Michigan State University and at the Fox Nuclear Accelerator Lab at Florida State University.

The $152,151 NSF Research in Undergraduate Institutions funding will support Riley and his team of Ursinus students for the next three years by covering the cost of summer stipends and travel for research and conferences.

“We’re trying to understand how the nuclear system behaves in a fundamental way; to understand the basic physics,” Riley said. “There are only certain numbers of protons and neutrons that produce stable nuclei that you can find in nature, just flying around. To understand the full picture, we have to get clever because the systems we want to study aren’t available to us unless we go and make them. And when we make them, they don’t live very long.”

The project consists of two independent experimental programs, one of which explores silicon-42 (Si-42), which Riley describes as his “white whale.”

“This particular nucleus is special because it’s really exotic,” he said. “It’s got 28 neutrons and 14 protons so it’s very asymmetric. It gets pretty close to walking off the edge of stuff we know about. We’ve been trying to get to a place where we can study that nucleus directly. Nobody’s done a direct measurement like the one that we do where we create this silicon-42 and excite it directly and look to see if the neutrons are coming out to play or not.”

The Ursinus group will also support the nuclear science community through the continuing development of simulations of the GRETA gamma-ray tracking array used extensively at FRIB, a central tool in experimental design needed for nuclear structure experiments at FRIB.

“When we’re involving undergraduates in this work, we’re getting some of them excited about going to grad school and getting a Ph.D., working in a national lab, or in industry,” Riley said. “It helps build the workforce pipeline into nuclear science.”