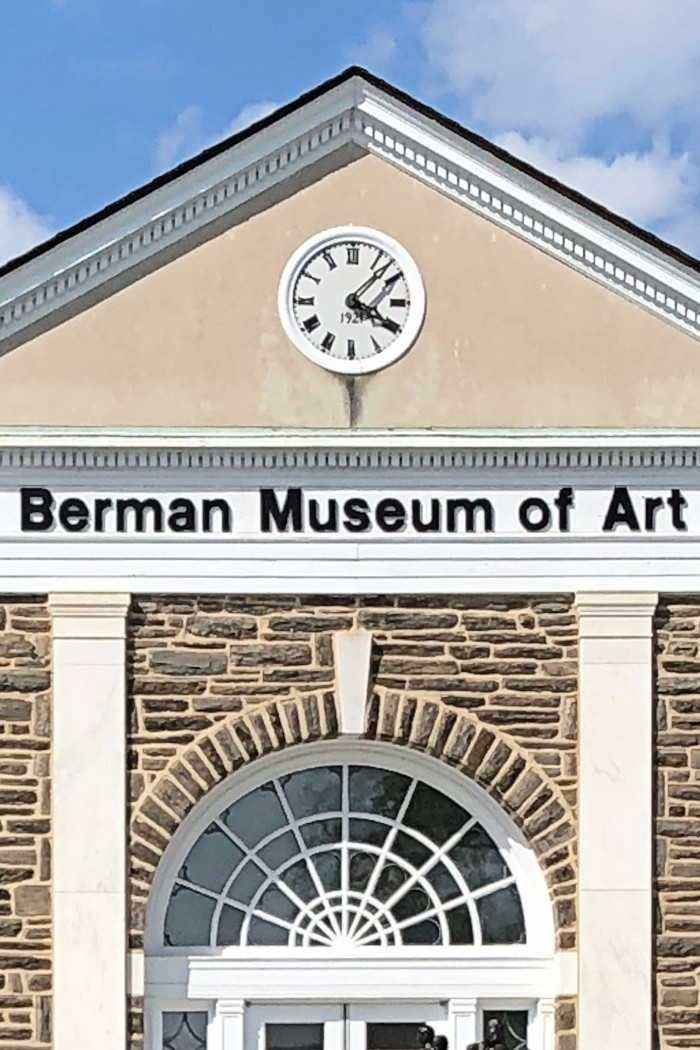 The Alumni Memorial Clock at the Berman Museum of Art is 100!

Donated by the class of 1921 to the then newly built Alumni Memorial Library, the clock is a reproduction of an iconic clock in London, England.

The clock that adorns the gable of the Berman Museum of Art was an innovation when it was assembled in 1921 by D. Brooke Johnson, a student who attended Ursinus College in the 1880’s. The “Denison Gravity, Three-legged Escapement clock” was a reproduction of the Westminster Denison Gravity Escapement Clock in London, England, that was known for its precision and accuracy.

The clock, from hands to weights, was modeled in wood and completely made from raw materials sourced from the local area. The movement of the clock when built was “started by three hundred pounds of weights held by a three-way steel cable carried to a steel drum, plus a spring reserve or maintaining power employed to drive forward during the process of winding or removal of weights.” The train was fixed for winding once a week, but with allowances for considerable margin if needed.

The dial is made of opalescent glass that is white by day and back lit and translucent at night. The bronze numerals and the phosphor bronze hands on the clock face were built to stand the ages.

The Alumni Memorial Clock/Berman Clock is still sitting atop the Berman Museum even though the original mechanism that ran it for around 78 years has now been replaced by an electric mechanism that has its own breaker in a panel box.

Brooke Johnson’s Great-Great Granddaughter and other family members are planning to visit the Ursinus Campus in November to view the clock and see a new plaque that will be installed on the deck side of the Berman Museum in its honor. When walking to the Schellhase Commons or Corson Hall on the Main Street side of the Museum, don’t forget to look up at this magnificent old clock. It has seen a great deal of Ursinus history in the past one-hundred years.