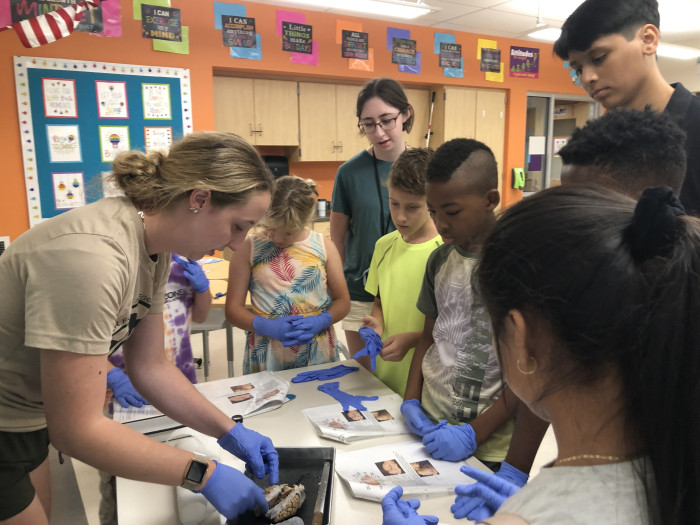 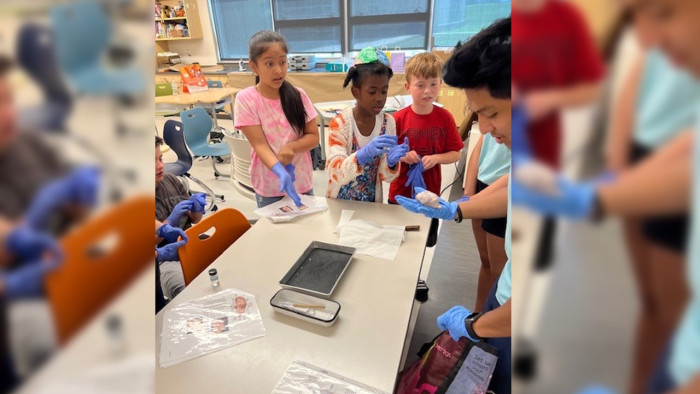 Mixing the Study of Neuroscience with Compassion for the Community

Thanks in part to a grant from Project Pericles, students in Professor of Biology Carlita Favero’s “Developmental Neurobiology” class were able to carry their semester-long projects with local organizations into the summer.

Favero’s lab studies the impact that drinking alcohol during pregnancy has on brain development. She is particularly interested in the effects on brain wiring that is important for sensory processing, attention, and vulnerability to substance-use disorders. Focusing primarily on the topic of substance-use disorders, students in her 400-level course applied what they learned in the classroom to projects that impact the community.

“There were three different groups, but we were all looking at different effects of alcohol during development and correlating it against fetal alcohol syndrome,” said Matt Lamb ’23, a neuroscience and psychology double major.

“The goal of the projects was to connect what we learned in class to the community as a whole to get a feel for what it’s like to be a scientist while also communicating with different groups of people, some of whom may be struggling with substance-use disorders,” said Jessica Rogers ’23, a neuroscience and biology double major.

Working in small groups, students completed service projects for three local organizations as they focused on a variety of community challenges, such as racial inequality and mass incarceration. Rogers teamed up with Lamb and Mya Knappenberger ’23, a neuroscience major with minors in biology, psychology, and animal behavior, to examine education access.

The trio worked with Orion Communities, a nonprofit in Phoenixville that helps individuals and families experiencing hardship due to poverty, disability, or illness. Following up on student-led lectures and lessons that likened the circuitry of robots to brain function, the group developed and led a weeklong summer camp for children.

They set out to make neuroscience fun, such as playing the game Pictionary to teach about the occipital lobe, which is responsible for vision. They created activities for all four lobes of the brain.

“Neuroscience is not really incorporated into the typical K-12 curriculum. Honestly, I didn’t learn about neuroscience until I got to college,” said Rogers. “To give them the basics and get them to associate different parts of the brain with certain activities will give them an extra boost compared to children who didn’t participate in that camp and won’t have that knowledge until they’re older potentially.”

“We also wanted to like teach them a little bit about like how science works in general, so we taught them how to use microscopes,” said Knappenberger. “At the end of the camp we did a brain dissection on a sheep brain. It was a really cool experience because they got to actually see what they had learned on an actual brain.”

Funding from Project Pericles, a consortium of colleges and universities that promotes civic engagement within higher education, helped provide the robots and microscopes, and the neuroscience program provided other materials, such as gloves, slides, and materials for dissection.

After the camp, Rogers and Knappenberger joined Favero at SJU’s fifth annual “Transforming Student Support: Best Practices in Collegiate Recovery” conference. Their presentation, titled “Developmental Neurobiology: A course designed to provide cultural humility and a recovery-friendly learning environment,” outlined the work that was done in the class and how it related to the community and substance-use disorders.

Among the topics was the work the class did with Katie Bean, director of prevention and advocacy, who discussed recovery and offered tips on how to be an ally on campus. As part of the process, students also attended a meeting that was part of a 12-step recovery program.

In addition to outlining the methods and outcomes of the class, Rogers felt the interactive nature of the conference provided opportunities for more meaningful discussions:

“There was a wide range of people who watched the presentations. There were people who weren’t involved in academia; They were just in recovery themselves, so they were there to learn. Then there were others who were educators learning from Dr. Favero, but also they wanted a student perspective as to how to create a class like Dr. Favero’s class and how to incorporate recovery into a science curriculum. There were also students there like us, so it was interesting to be able to converse with a wide range of people in a more casual setting instead of just spitting information at people.”

“Neuroscience is such an interesting field because each person’s brain operates the same, but also differently, so learning about the biology behind why people think and behave the way they do is so fascinating to me.”