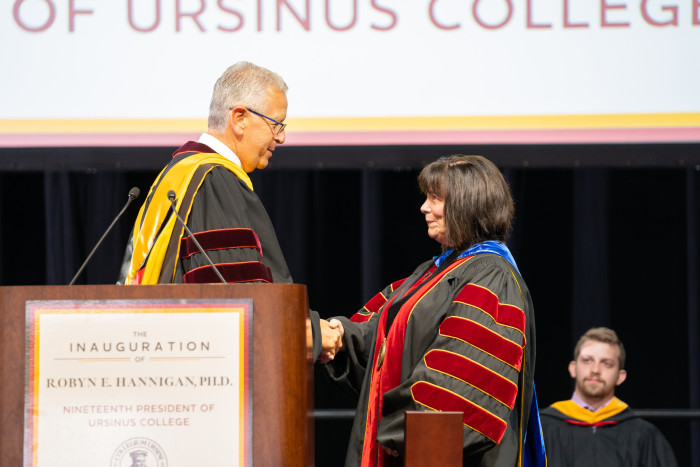 Robyn E. Hannigan, Ph.D., was officially installed as the 19th president of Ursinus College on Friday, October 14, in the Floy Lewis Bakes Center Field House during a ceremony that reaffirmed the college’s commitment to the liberal arts and sciences.
by Ed Moorhouse and Jennifer Meininger Wolfe October 14, 2022

Following a contingent of about 75 students, faculty, and staff—as well as alumni, delegates from other institutions of higher learning, and honored guests—President Robyn Hannigan processed along the walkway outside of the Kaleidoscope Performing Arts Center and into the Floy Lewis Bakes Field House.

It was a scene fitting for a president who has, from her very first day in office, embraced the value of community.

In addition to DeSimone, who presided over the ceremony, other members of the platform party included Lewis Riley, professor of physics and chair of the faculty council; Arthur Artene ’23, president of the Ursinus College Student Government; Melanie Cunningham, administrative support coordinator and president of staff assembly; Jeevan Sekhar ’99 and Amy Sekhar; the Rev. Aidsand Wright-Riggins, mayor of Collegeville; the Rev. Betty Wright-Riggins, the college’s interim chaplain; and Pennsylvania Senator Katie Muth.

Procession participants waved “One Ursinus” flags while walking with Hannigan.

“This has been a campus of discovery and of invention, where scholars and artists and athletes share a common DNA. I, like my predecessors, will carry into the future a living vision of the liberal arts that will forever remain grounded in the common good and in service to one another,” she said.

Hannigan highlighted Every Student’s Success, the college’s next strategic plan, and outlined forward-thinking priorities that included a passion for making college accessible to all. After her speech, she signed the Okanagan Charter, committing Ursinus to more holistic wellbeing within the campus community.

The ceremony also included welcome remarks from Phillip White-Cree, coordinator of indigenous community support and outreach at Clarkson University, where Hannigan was provost, and performances by the Ursinus brass quintet, Voices of Ursinus, and Blazing Bear, an award-winning Native American drum group from Oklahoma.

“I assure you of our confidence in you and pledge our support to you as you strive to continue the greatness that is this college’s past and destiny,” said DeSimone as he presented Hannigan with the bronze presidential medallion.

The inauguration festivities commenced earlier this week with the president’s picnic and a community art workshop hosted by the Berman Museum of Art. Philly-based artist Laura Hricko provided natural dye materials such as onion skins, marigolds, hibiscus leaves, rose petals, sumac, and turmeric for participants to use to decorate tote bags, tea towels, or handkerchiefs.

“As your president, I will work alongside you to harness all that is possible and together we will move forward with a renewed purpose and unified vision for Ursinus,” Hannigan said.