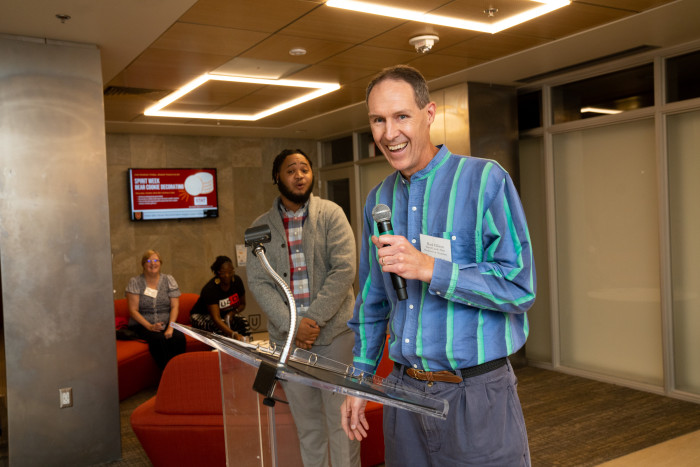 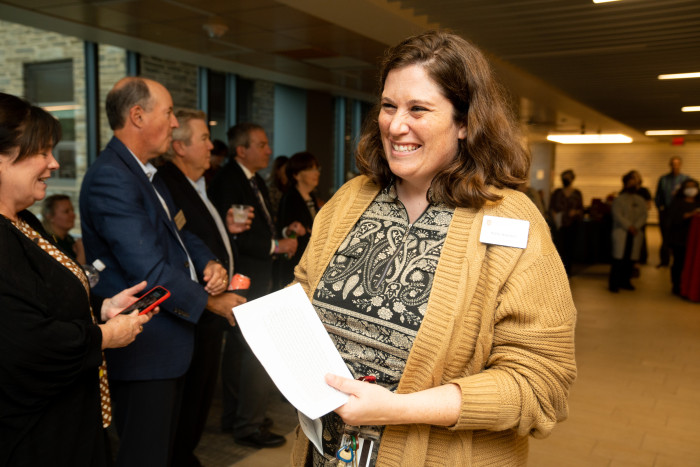 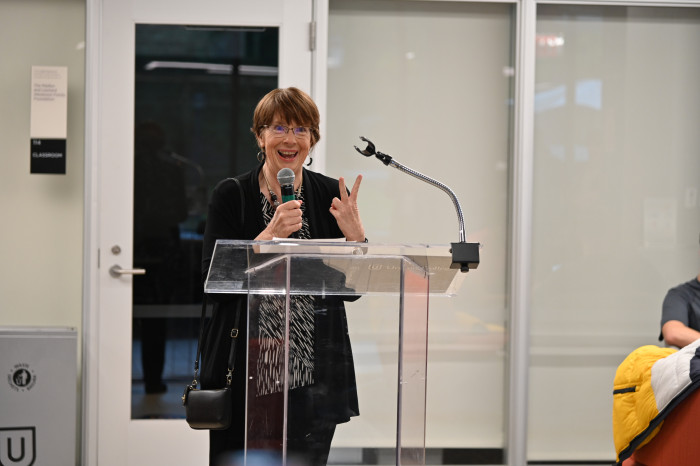 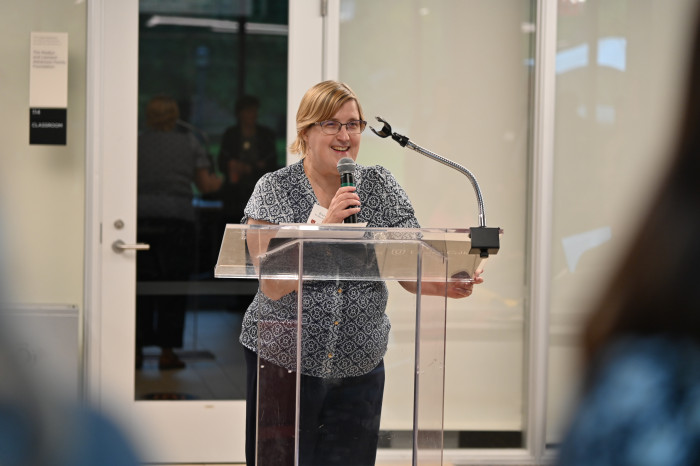 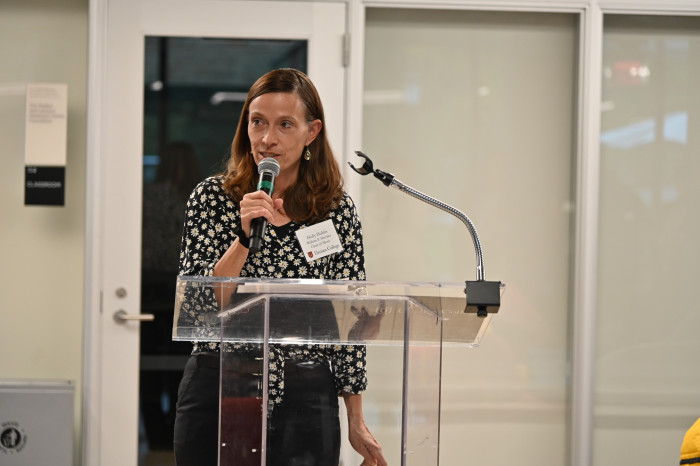 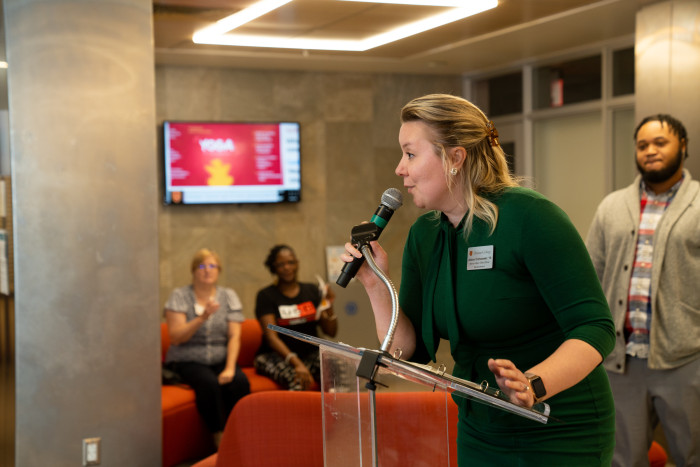 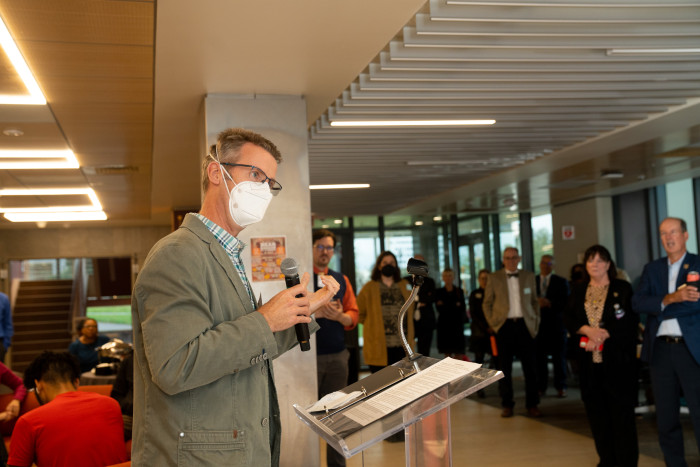 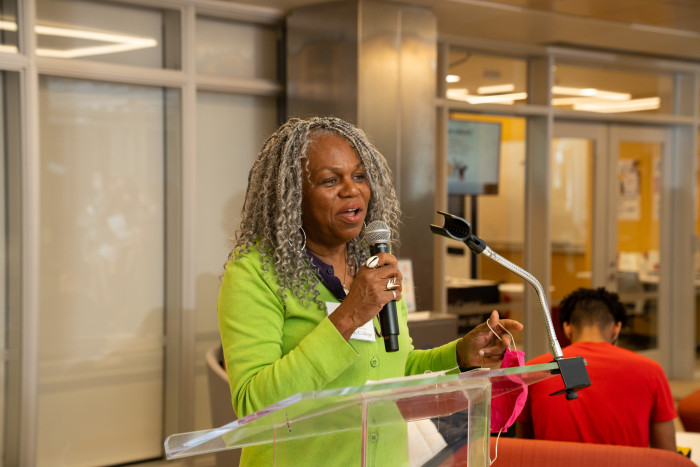 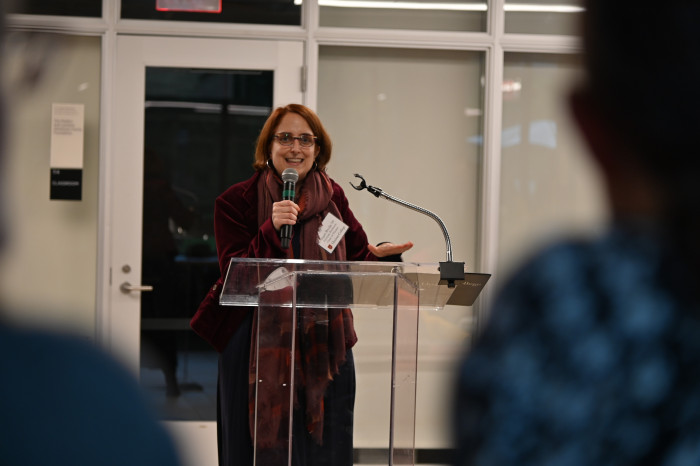 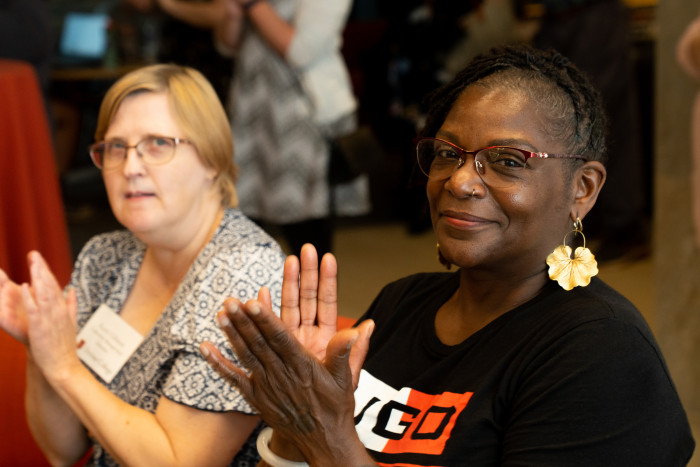 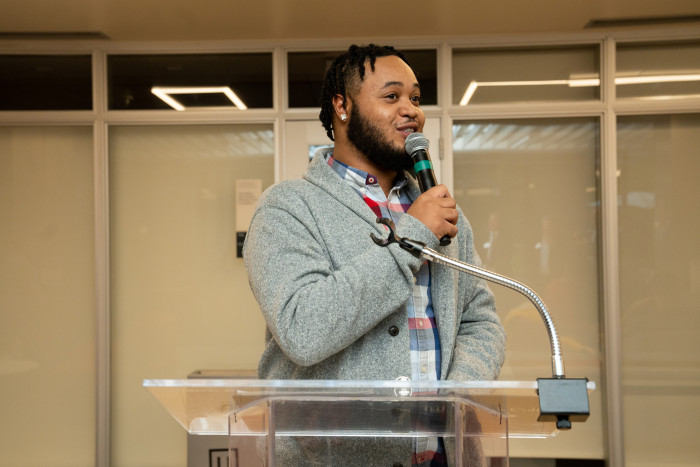 HomepageNewsLongtime Staff, Faculty, and Board Members Recount Their “Ursinus Moment”

Longtime Staff, Faculty, and Board Members Recount Their “Ursinus Moment”

Asked to select just one special personal moment that encapsulated Ursinus, and recount the story in 60 seconds or less, what would you say?

On Thursday, October 13th, Ursinus celebrated the inauguration of Robyn E. Hannigan with a special event with stories from long-time Ursinus community members, including long-time staff and faculty and alumni who have come back to work at the college. Chapel Coordinator Brandon Winfield ’22 hosted the event, and introduced speakers including Meghan Brodie ’00, Abbie Cichowski Kim ’10, Mark Ellison, Kerry Gibson, M. Nzadi Keita, Tommy Armstrong ’20 (who I am), Kate Keppen ’05, Hugo Montesinos-Yufa, Holly Hubbs, and Patrick Hurley.

Associate Professor of Theater Meghan Brodie opened the evening with a story from her first year back at Ursinus after graduating, this time an instructor. She warned her students that she had “a cute aggression,” meaning she loved cute animals, babies, etc. and reacted to them fervently. “So, the first couple of weeks that were really very quiet in my classroom, no one’s doing anything,” said Brodie. “I’m doing the dog and pony show. I’m like poking out my own eyes like Oedipus and I get nothing.”

Brodie took aside one of her students and asked what she was doing wrong. Why did everyone look petrified?

“‘You told them you had acute aggression,’” said the student, advising Brodie to clarify.

“That’s still one of my favorite personal stories.” 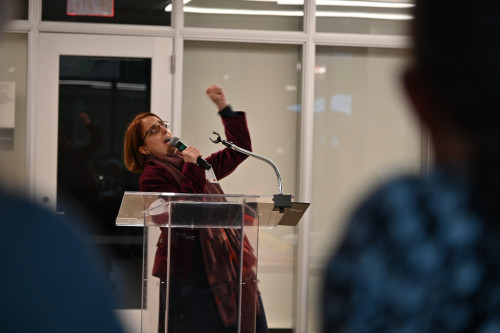 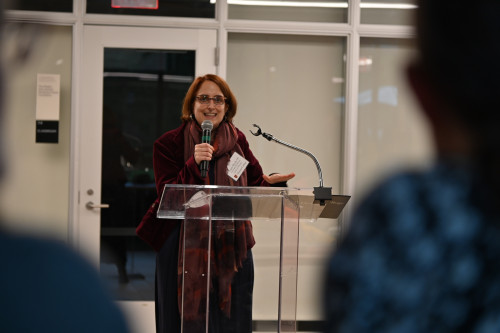 William F. Heefner Chair of Music Holly Hubbs shared a moment that became more meaningful to her in retrospect, regarding a former student of hers named Rachel Polinski ’14. During Polinski’s first year, in spring of 2011, Hubbs took the choir and chamber winds tour to Ireland, where Polinski was to perform flute. Hubbs recalled, “She had never been on a plane and was terrified about the idea.”

What happened? Polinski boarded the plane, performed in Dublin and Galloway, and discovered what would become a lifelong love of travel. Today, she’s a doctor working in an emergency room in Altoona, Pennsylvania, using all her vacations to go abroad. “That I was there on her first-ever plane ride is my Ursinus moment,” said Hubbs. 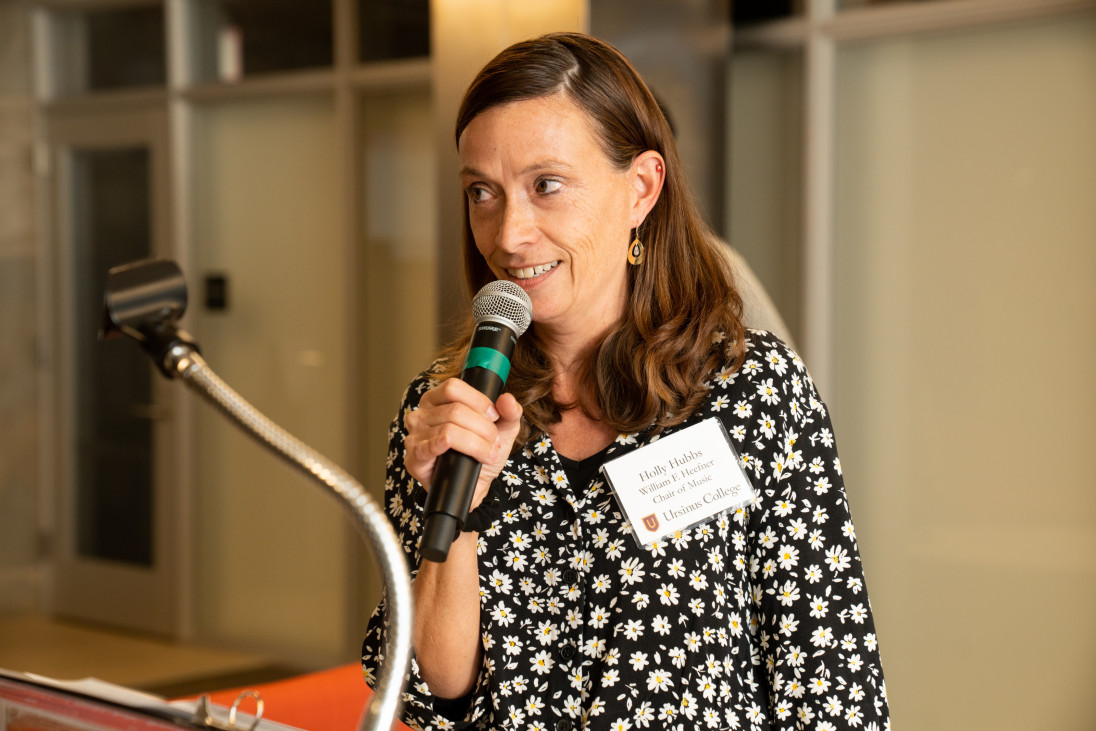 Following the program, Winfield tossed it up to the audience. The first to take the podium was boardmember Michael L. Carter P’04, P’07.

Carter, who had two daughters who attended Ursinus, Kristin Carter ’06 and Leslie Carter ’04, had arrived before the event began. “I have to be frank. I was going to leave,” said Carter to much laughter. “Nothing was happening. I had my crab cake things.” He decided to stay and listen.

“And man, I’m glad I did. Because it’s clear, the value that you provide for students,” said Carter. 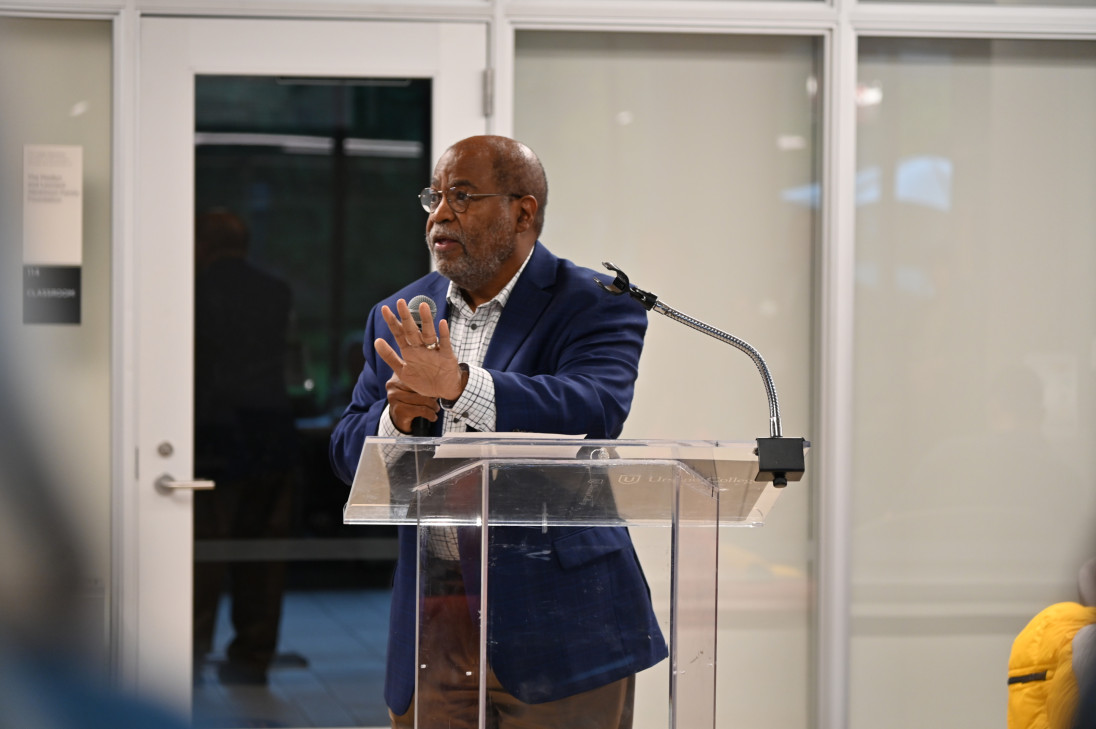 After hearing a few more impromptu Ursinus memories, from faculty, staff, and board members, Winfield closed out the night. “We are so lucky to be a part of a community as special as Ursinus,” Winfield said, before congratulating Hannigan on her inauguration, and her future of myriad Ursinus moments. 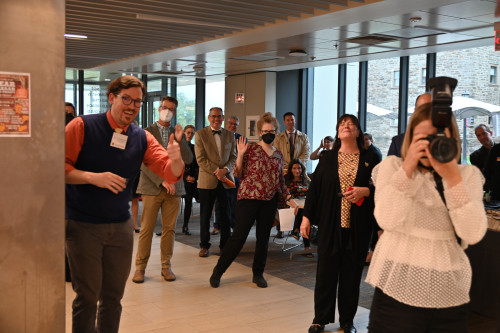 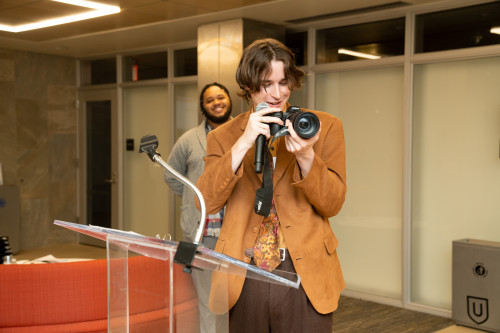