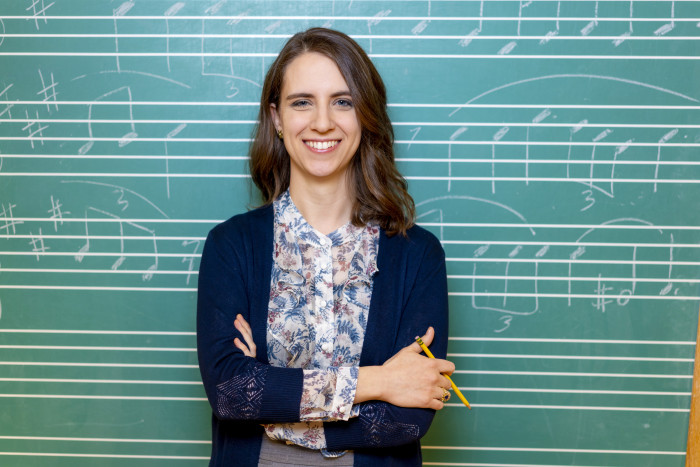 An Analytical Toolkit for Music Theory and Jewish Liturgical Chant

When Assistant Professor of Music Rosa Abrahams began studying music theory, Jewish liturgical music—which she calls her “musical home”—was not reflected in what she was learning because music theorists have typically engaged with music that is traditional, classical, and popular. She was fortunate enough to have a dissertation advisor in graduate school who encouraged her to study what she loved, so she started exploring Jewish music analysis.
October 27, 2022

“It was immediately apparent that I couldn’t study just the music; body movement is vital to prayer, even in branches of Judaism not as well known for their physical movements, such as Reform and Conservative Judaism, as opposed to Orthodox Judaism,” said Abrahams. “This really resonated with my own embodied experience of how worship and prayer really work. My work in Reform and Conservative congregations has only deepened my love of Jewish liturgy and of the complexities of embodied prayer experience. Moreover, I find it incredibly rewarding to not only be bringing ritual music into the scope of music theoretical discussion, but also to be bringing music analysis to the congregants and clergy I work with, as a way of helping them explore their own individual and communal experiences.”

In exploring how people move their bodies during prayer, Abrahams focuses specifically on Jewish worship settings, examining how movements are aligned—or not aligned—with the meter of the chant being sung or heard. To do this, she analyzes the chant, which doesn’t always have a regular meter like some music does. She also analyzes individual people’s movements, but the challenge is that she has to do this analysis without the benefit of video because she is restricted from recording during worship.

Music theorists employ analytical methods that have developed over centuries, but Abrahams is looking to expand on what she calls an “analytical toolkit” in two ways. First, she uses mimicry to learn to move as her participants move so that she can record and analyze the movements. “This type of simulation analysis is done in performance studies, but less so in music theory, where bodily experiences with music have historically been understudied,” said Abrahams. “This is changing, though, and theorists are becoming increasingly interested in music-body interactions. To do this mimetic analysis, I interview congregants and clergy about their musical and physical experiences during prayer, and then I observe them for many weeks, sometimes months, during worship.”

The second way she is trying to expand the analytical toolkit is by working with the music in a different way from classical and popular music. Since Jewish music is an oral tradition music, it is typically transmitted through oral learning, rather than being written down. “This has a couple of implications: there aren’t scores or recordings that can be used as the ‘original’ or ‘correct’ version of a given piece, and community customs around performance for a specific prayer melody can change from synagogue to synagogue. Thus, we can understand Jewish liturgical chant as being ontologically different from composed music in, say, a classical or popular style. Music theorists typically analyze something fixed—a score or a recording—that we can listen to and look at it repeatedly and it stays the same.”

Abrahams said that Jewish liturgical chant evades this kind of “fixing” into a static object, which means that music theorists need to develop their analytical methods to understand it better. “I approach this issue in my analysis by comparing multiple versions of the same prayer, by different people, and looking at what stays the same and what is different between them.”

“Through these analyses, I hope to understand more about how embodied prayer experiences work in synagogue settings, and how meter works in Jewish liturgical chant.”