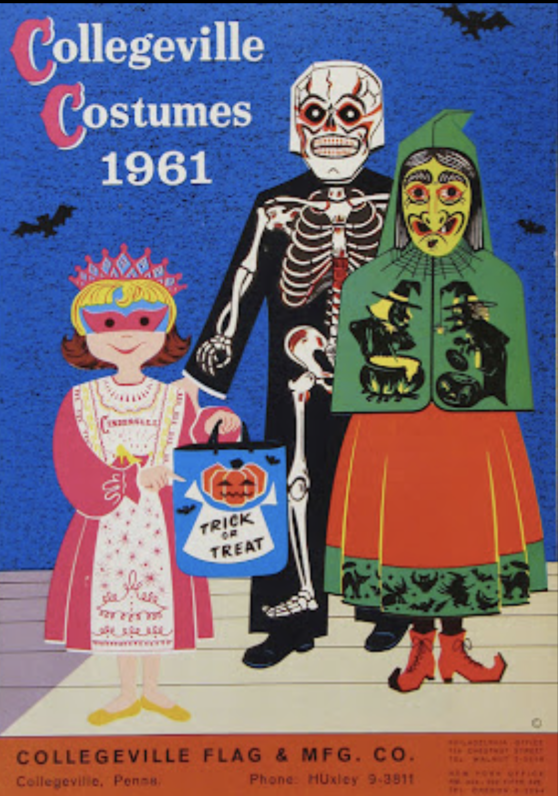 Did you know that for decades millions of the Halloween costumes sold in the United States were designed and manufactured just a few blocks away from Ursinus College? Read on for the devilish details!

Amazingly, a company that would come to be synonymous with trick-or-treating (and candy consumption) was started by a dentist! Dr. Samuel D. Cornish had a successful dentistry business in town in the early 1900s. A frequent advertisement in the local Independent newspaper reads: “Dr. S. D. Cornish, Dentist, Collegeville, PA. First-class workmanship guaranteed. Gas administered. Prices reasonable.”

At some point, Dr. Cornish must have caught wind of the up-and-coming flag manufacturing business. (There would be no less than three different flag and decoration companies in the Perkiomen Valley by the 1920s.) The Collegeville Manufacturing Company was established in 1909 in a one room building on Fourth Avenue. As business boomed, a series of expansions followed, and in 1914, the name of the business changed to the Collegeville Flag Company.

The same materials that made the flags were repurposed for manufacturing other products, including aprons and house dresses. (Advertisements in the Ursinus Weekly newspaper stated: “Money for students – Sell our ‘Prim Lady’ waterproof household apron. No trouble to make five dollars a day clear money.”) By 1924, Dr. Cornish gave up dentistry to devote all of his time to the manufacturing business. By 1927, masquerade suits entered the product line. Beginning in 1930, the Company was hosting its own annual masquerade ball. The September 19, 1935 Independent reports that during the fall season, the company had a dedicated costume plant on Third Avenue that employed over 125 workers. “After the Decoration Day flag rush is over,” the article states, the main plant on Fourth Avenue also switched to working on masquerade costumes. “The Collegeville firm has its own staff of designers and pattern makers. Hundreds of designs are featured from the ordinary Santa Claus or clown outfits to the elaborate silk creations for the ritzy ballroom affairs. Masquerade suits made and designed in Collegeville are shipped to all points in the United States.”

The Collegeville Costumes division of the Collegeville Flag and Manufacturing Company produced countless generic and affordable costumes including skeletons, ghouls, witches, ghosts, princesses, knights and devils – even a “Man from Mars.” Licensed character costumes from television, comics and movie properties became an element of the business rife with risks and great rewards for the company that could predict the next popular trend. Some licenses, such as the Universal Monsters (Dracula, Frankenstein, et al.) would bounce back and forth between Collegeville and its chief rival in the business, Ben Cooper, Inc. of Brooklyn, New York.

For more information (and to see many examples of the colorful costumes) seek out the 2019 “Halloween in a Box” documentary written and directed by Rob Caprilozzi. The film examines the history of the three largest costume manufacturers (Ben Cooper, Collegeville and HalCo) and features interviews with Dr. Cornish’s grandson, Sam Cornish.