Ursinus is once again blazing a trail in women’s athletics, becoming the first Centennial Conference college to field a women’s wrestling team. Sydney Bowman ’22 and Laura Bradley ’25 helped lay the foundation for the program, which begins competition this year. 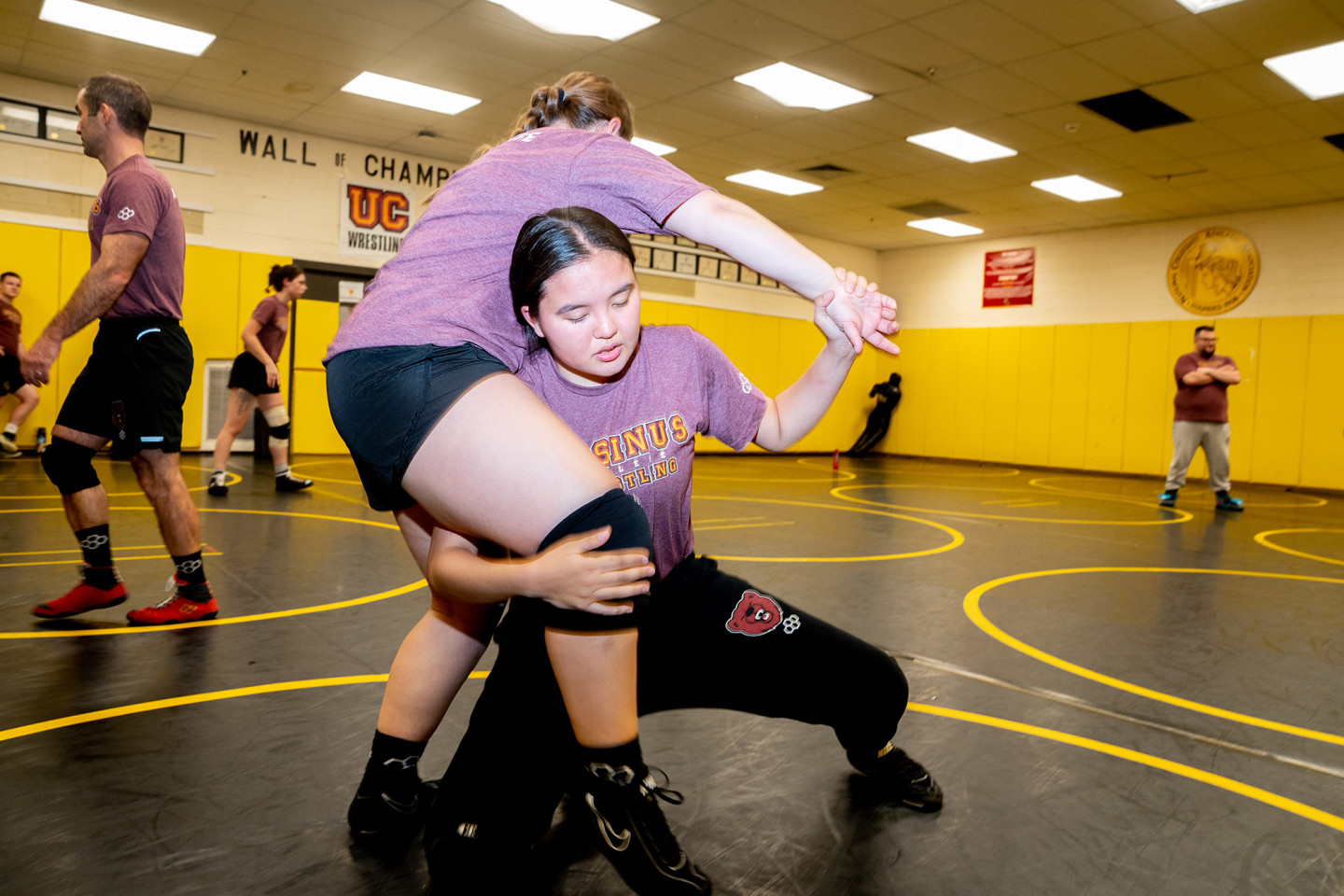 Wrestling is tough on the body. Grappling limbs get torqued into unnatural positions. Every muscle group is strained to the utmost, and shoulders, elbows, knees, and lower backs all take a beating. That’s part of the reason Sydney Bowman ’22, who started wrestling in the third grade, didn’t plan on wrestling in college.

“It’s very tough on your joints, and I was pretty beat up after doing it for so many years, so I retired,” Bowman said.

But she couldn’t stay away from wrestling completely once she enrolled at Ursinus. During her sophomore year, she signed on to be the men’s team manager, keeping the scorebook, taking match videos, and getting to hang out with the team and watch tournaments.

She would be enticed out of retirement completely in her senior year, thanks in part to Joe Jamison, the men’s wrestling coach who had advocated for a women’s wrestling team at Ursinus when he applied for the men’s head coach position in 2019.

“When I was interviewing, we talked about the non-negotiables,” Jamison said. “And one of the things I mentioned was starting a women’s program, because there’s a lot of girls in high school now that deserve the same opportunities that our men have.”

That desire became a reality last April when the college, a trailblazer in women’s athletics for nearly a century, announced that it would add a women’s wrestling program to its NCAA Division III legacy this fall.

Director of Athletics Erin Stroble ’02 says that Ursinus was at the forefront of women’s sports, particularly in field hockey and lacrosse, even before Title IX led to more opportunities for women in athletics at the college level.

In fact, Ursinus became known for its prowess in women’s athletics as early as the 1930s with the legendary Eleanor Frost Snell, a multi-sport coach known best for her work in field hockey. Snell never had a losing season in the sport in 38 years at Ursinus.

“We definitely talk a lot about that in recruiting, and in our level of support for our women athletes,” Stroble said. “And women’s wrestling allows us to continue that tradition of providing additional opportunities.” 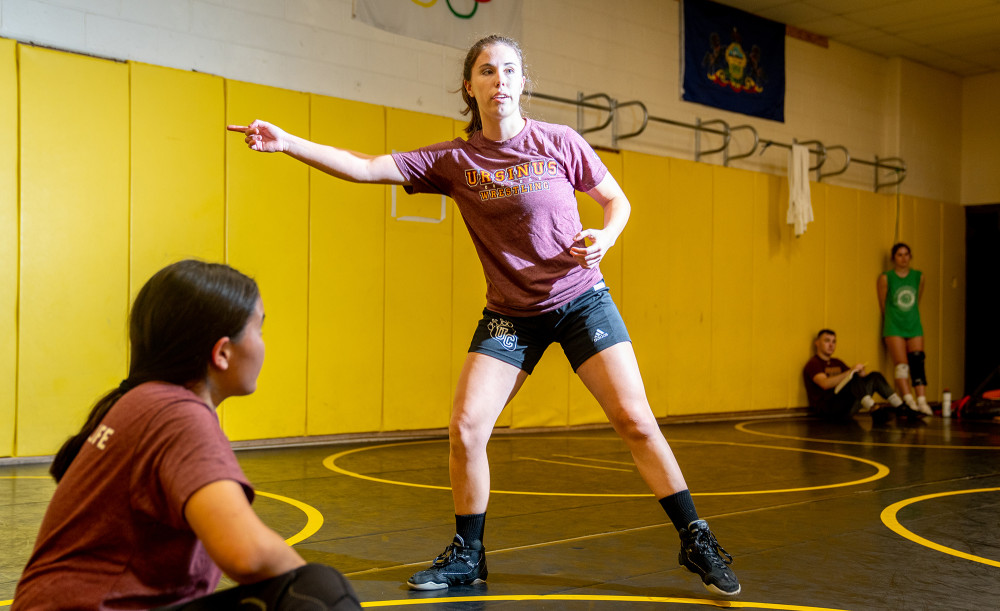 The prospect of a women’s wrestling team piqued Bowman’s interest, though she wasn’t quite ready to fully commit to lacing up her high tops just yet. Then, Jamison discovered incoming student Laura Bradley ’25 when he was going through one of the preseason reports he gets from the admissions office.

“I was just making sure one of my recruits had everything in and I noticed Laura’s name on there, and that she was interested in wrestling,” Jamison said. “So, I reached out to her, and it turned out she was just looking for the right opportunity at a school that she really wanted to attend.”

Bradley, who only started wrestling in her sophomore year in high school, didn’t have a senior season because of the COVID-19 pandemic, so she was eager to get back into it.

“I’m honored to help make women’s wrestling a reality here at Ursinus College,” Bradley said. Unfortunately, a back injury kept her from competing in her first season at Ursinus, but her mere presence was a boon to the budding program.

“When Laura committed to Ursinus—that was a really big step for us, finding someone who was willing to put her faith in the program and that we were going to get this done in her time here,” Jamison said.

After Bradley signed on, Jamison reached out to Bowman again to gauge her interest, telling her about Bradley and how it would be helpful if Bowman was also on the team. In addition to the strength and conditioning training that goes into getting into match shape, Bowman would also have to learn an entirely different style of wrestling than she had learned for the past 10 years of her life.

“I ended up learning freestyle in practice, which was brand new to me because in high school, you wrestle folk style,” Bowman said. “But it ended up being a lot more fun than I anticipated.”

As Bowman enjoyed practicing with Bradley and the learning curve that comes with mastering a new style of wrestling, the competitive juices started flowing again, and Bowman began asking Jamison about participating in some competitions.

“Sydney was practicing every day with the men and anytime that we could find her competition, we would go at it,” Jamison said. “She wrestled to a 6-and-1 record—her only loss was actually to a national qualifier up a weight class.”

Bowman would go on to make history on the mat in December 2021 when she became the first female wrestler to compete in and win a match for Ursinus in the Delaware Valley Aggie duals.

“I didn’t realize that I had won because the points are a little hard to see when you’re on the mat,” Bowman said. “I definitely wasn’t expecting to win, let alone win by a pin.”

The winning moment was crowned by the fact that the entire men’s team was there to support her.

“They were all watching and cheering,” Bowman said. “I was so excited.”

Another memorable moment for Bowman happened before the tournament even began, while the teams were waiting in line for their weigh-ins. The girls from the other teams were not only friendly toward Bowman but supportive, telling her that they would be cheering her on even when she’s wrestling their teammates.

“It was nice to see that camaraderie because I’d never been a part of a women’s team,” Bowman said. “We’re all trying to make it more accessible, even if we’re wrestling against each other.”

Bowman’s experience competing with the men’s wrestling team allowed her to graduate from Ursinus in May on a very high note. She’s currently taking a gap year before hopefully going on to graduate school to become a physician assistant.

“I’d like to be a PA, and a lot of that involves teamwork, speaking up for yourself, and fighting for what you think is best for your patient,” Bowman said. “And I feel like I’ve gained a lot of those skills from wrestling.”

Bowman still won’t be not quite done with wrestling during her gap year, however, because she’s agreed to be an assistant coach for the fledgling Ursinus women’s team.

“I want to see our sport grow,” Bowman said. “And I put in a lot of work last year, so it’d be a shame if I never got to see any of the results.” 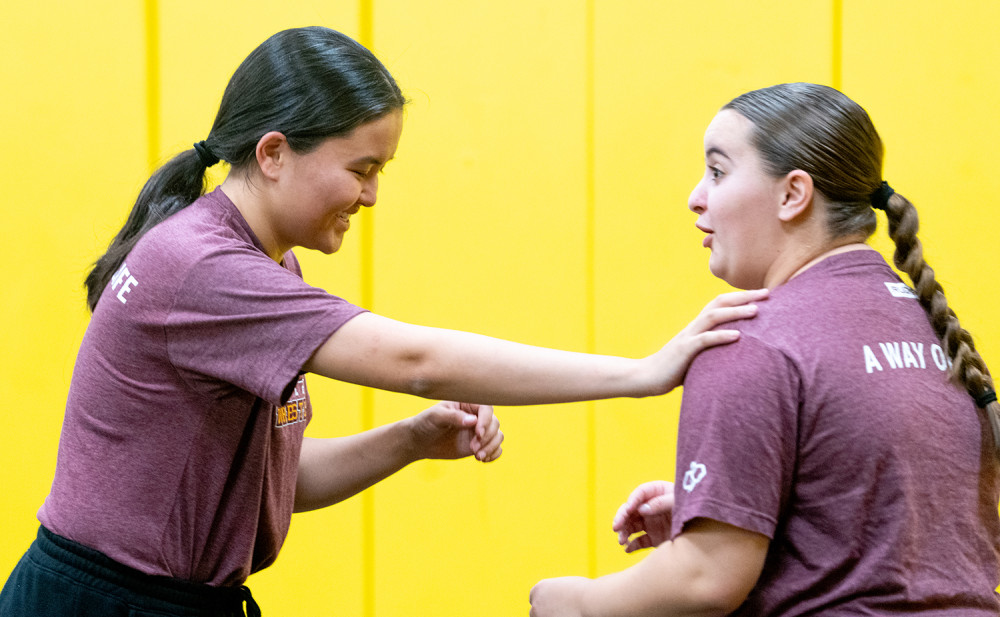 Bowman will be assisting Jamison and the rest of his men’s staff while the college continues its search for the right coach to lead the women’s team. As for living up to the legacy of Ursinus women’s athletics, she said, “I would not say that there is pressure upon us to do so, but there has been tremendous support, allowing us to grow and surpass the standards we hold ourselves to. I did not do this because I felt pressure to do so, but because this was an opportunity to do something amazing for this sport and team.”

She continued, “I knew I wanted to do well, but most of all I wanted this program, creating a space for this team, and the athletes after me, to grow and succeed. Ursinus has a history of amazing women in sports, and I’m glad to join the ranks, continuing to expand the opportunities that Eleanor Snell paved the way for and developing equality in athletics.”

Jamison and Stroble echoed the sentiment, noting the opportunity for the entire staff to build the program and allow the athletes to thrive.

“It’s a sport that is exploding in terms of popularity, but it hasn’t been around a long time,” Stroble said. “So, there’s not a lot of women who are now at the point in their careers of becoming head coach. The pool is much smaller than if we were searching for a soccer coach.”

Both Stroble and Jamison are excited to be adding a new sport to the college’s repertoire for many reasons, among them is the fact that they appreciate all the things that athletics did for them when they were student athletes. Both agree that participation in athletics teaches perseverance and grit, the ability to continue to fight when faced with adversity—all the intangibles that a sport like wrestling can teach an individual.

“And Ursinus is dedicated to providing an opportunity for women who want all of that but aren’t willing to compromise their education,” Stroble added. “There are a lot of schools that offer wrestling, but I think anyone who has been at Ursinus knows it’s a pretty special place.”