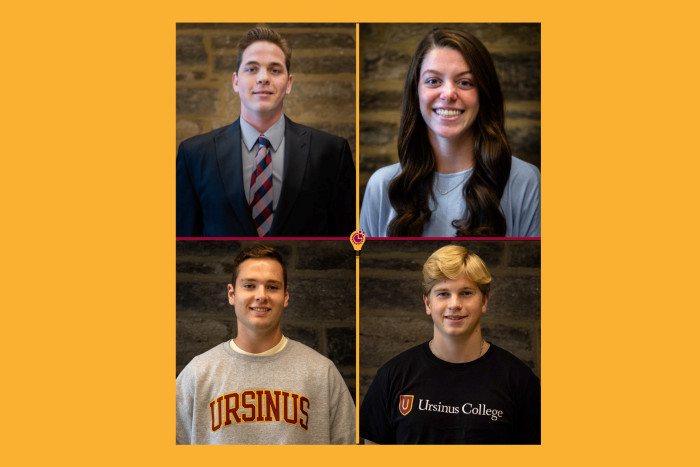 For the first time ever, the U-Imagine Center has entered a team in the America250PA Competition, an annual contest to inspire future generations of leaders from Pennsylvania. This October, the team was selected as one of five finalists to take their submission to the Harrisburg finals on November 18.
by Tommy Carroll Armstrong ’20 November 21, 2022

The challenge: Create a project and marketing campaign that empowers youth and inspires the next generation of leaders in the state.

The team, comprised of Manning Smith ’23, Carlie Shiller ’25, Tyler Griffith ’26, and Donald Lattanze ’26, set out to address problems facing today’s Pennsylvania middle schoolers and high schoolers. The group members identified part-time jobs as a major source of leadership experience and opportunity-building for young people, but one that felt disproportionally out of reach for many of today’s high schoolers.

The project was informed by the students’ own experiences with part-time work in high school.

Carlie Shiller, an applied economics major and a soccer player, said, “This idea was important to me because I struggled to find a good part-time job in high school. I remember there was one point when I drove around my town, stopping in stores, and asking employees if they were hiring.” She found that job-search websites like Indeed were not yielding many responses. It took her a long time to find a job that was flexible with her high school schedule. After finding a part-time position with KinderCare, a daycare and education center, Shiller was able to make part-time work an enjoyable and constructive part of her life.

A former landscaper, Dairy Queen cashier, and baseball umpire, Manning Smith’s leadership capabilities were transformed by his pre-college work experience. “I know how crucial it was in allowing me to build my skills for responsibility,” said Smith. “I hope we make a lasting impact on the lives of future high schoolers.”

Donald Lattanze worked seasonal jobs in high school. “In the wintertime, I worked at a Christmas tree stand and shoveled driveways. In the summer I would mow lawns,” he said.

Today, the U-Imagine student ambassador wants to empower the next generations. “It was important for us to inspire young entrepreneurs and innovators to get involved with jobs early in their career.”

Tyler Griffith delved deep into the logistics of building an app that would work for both businesses and young students. “I hope to see our project come alive and actually be incorporated into schools to help high school students be successful.”

Members of the team have already been awarded $100 each for making it to the finals, and they hope to win some extra funds to develop the app when they compete in the state capitol against teams from Point Park University, Pennsylvania College of Art & Design, Lebanon Valley College, and Rosemont College.

In the meantime, the four are having a great time developing their project, reports Shiller. “My favorite part was when we were brainstorming ideas on the whiteboard. It was fun to bounce ideas off one another and ultimately come up with an idea that will help students find jobs and become leaders,” she said. “I hope that we can make this app happen.”