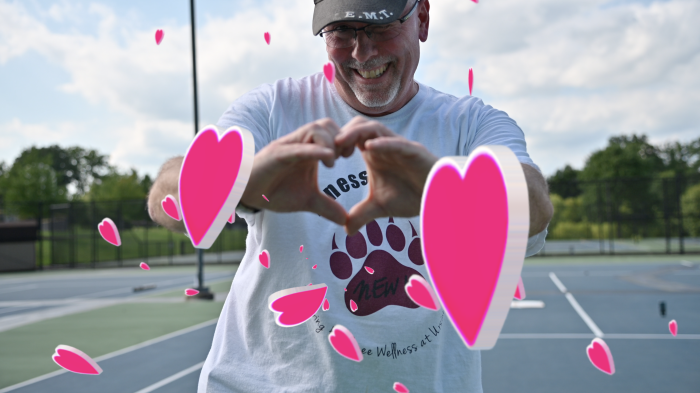 Whether it’s skating or biking, Tech Support Technician and part-time Campus Safety Officer Ray Stitt has had a lifelong passion for wheels—a hobby he’s been combining with his social media know-how to gain fame on TikTok as @BgDaddyRay.

One might say that, put simply, on campus the 24-year staffer fights viruses, and off campus he tries to go viral. It is a natural, if corny, observation—but that type of humor is right up Stitt’s alley. One needs to look no further than a neon “We can’t date if you don’t skate” t-shirt in one recent video for proof.

Stitt was only 3 years old when he learned to roller skate, and later he competed in inline speed skating. As a teenager, he raced BMX bikes. He was ranked third in Pennsylvania and 11th nationally.

“Now I just skate and bike and have a good time with it,” said the official Schuylkill River Trail ambassador.

When he’s not traveling to rinks along the east coast, he can likely be found at either Whitehall Skateaway Roller Rink or Philly SkatePlex. He tries to make time for skating three or four times a week.

“What I love about skating is that whenever you walk into the rink, and you put your skates on, and you hit that floor, your troubles are gone. You’re in another world, like you just entered a whole new arena,” said Stitt. “It’s all about the fun and watching everybody else having fun out there with you.”

It was six years ago when he started creating videos on TikTok with his daughter, who is now 14. “I decided I was going to try to do a TikTok in the skating rink,” said Stitt. “The first video that I posted just went crazy. It was good songs. It was good people, good skaters that were all in a big pack. It just took off from there.”

When he was a child, Stitt skated with his church group, and the soundtrack was strictly organ music. Now he prefers to skate to 80s music and “anything that has good beats per minute.” Out on the floor, he likes freestyle skating as well as shuffle skating, which he describes as watching a marching band, where everyone is doing the same moves in unison and “is in that same beat, and in that same groove, and feels that same energy.”

“I just enjoy skating, and I hope that people who used to do it come on back, and people who haven’t tried it come on out,” said Stitt. “A gentleman who was 96 years old had his birthday party at the rink … Everybody was behind him videotaping him out on the skating floor at 96 years old. Hopefully I can be out there in 40 years doing that same thing.”